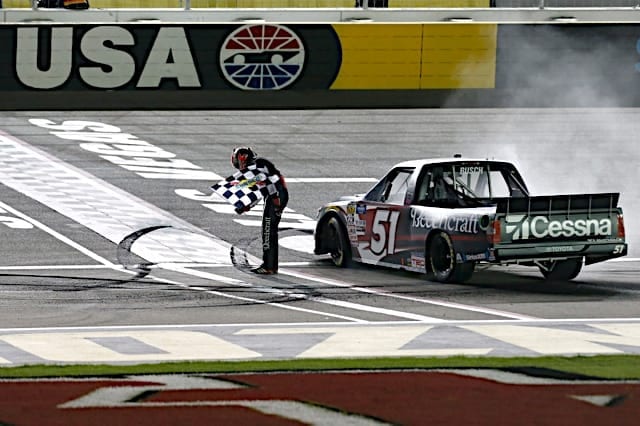 Kyle Busch bowing to the crowd after his win at Las Vegas (Photo: Nigel Kinrade Photography)

In a Nutshell: Kyle Busch dominated the Strat 200 at Las Vegas Motor Speedway Saturday night, taking the checkered flag just over one second ahead of runner-up Brett Moffitt. The owner/driver started on the pole with a track-record speed and led 111 of 134 laps en route to his 53rd career victory. Matt Crafton, Stewart Friesen and Harrison Burton rounded out the top five.

Sheldon Creed, who spun in the middle of a three-wide battle early to bring out the only non-stage caution, recovered to a sixth-place finish, his best result of the season.

Take a look at how the No. 2 went around at @LVMotorSpeedway. pic.twitter.com/ne9Z7bzeby

Just a week removed from hearing his boss say his “career is on the line” and “he’s got to show up this year and make it happen,” Todd Gilliland finished a solid seventh, his second consecutive top 10. Johnny Sauter, Ryan Reed and Ross Chastain rounded out the top 10.

Who Should Have Won: Busch. He had the speed in qualifying and backed it up with a record-setting run for the pole. Despite losing the lead on pit road at the conclusion of the first stage, Busch worked his way to the front to take the second stage and only relinquished the lead again while making a green-flag pit stop late in stage three. Only Moffitt and Friesen looked like they had anything able to challenge Busch, but the No. 51 Toyota ultimately proved to be too strong to beat.

As stage one came to a close, Brett Moffitt attempted to run down eventual winner Kyle Busch but didn’t quite have enough speed. Under the stage caution, the driver of the No. 24 Chevrolet suffered a miserably long pit stop when his rear tire changer’s air hose got caught under the right rear tire.

A tough break for @Brett_Moffitt on pit road.

The air hose gets stuck underneath his right-rear tire costing him numerous spots. pic.twitter.com/QjEaxOasQU

The lengthy delay on pit road cost Moffitt a ton of track position and he was only able to recover to 10th by the time the end of stage two rolled around. He had enough speed in the truck to work his way through the field in stage three, and a late-race green-flag pitstop four laps earlier than Busch allowed Moffitt to close the leader’s gap.

Moffitt got a good shot to run at Busch for the lead but got loose as he got close to the back bumper of the No. 51 Toyota and faded back to around a one-second deficit by the time the checkered flag flew.

He looks back on the finish at @LVMotorSpeedway. pic.twitter.com/3PFhUkheYI

Ryan Reed, who started the 2019 season without a ride after losing primary sponsor Lilly Diabetes, made his first Truck Series start since 2012 in Las Vegas Friday night. After starting 10th, he hovered right around the top 10 for much of the night before taking the checkered flag in ninth.

“Overall, I had so much fun being back in the race truck. We had a fast Toyota Tundra all night,” Reed explained. “We lost some track position early. Just kind of battled to get that back all night but felt like we had a top-five Tundra but I had a lot to learn about how to manipulate the air. It’s a lot different than what you have in the Xfinity deal.

“I think everyone at DGR-Crosley is really talented. They have all the right pieces. They will keep getting better. I hope we can do more together because there are opportunities to have some really good runs and contend for wins if we can have more time to gel. If we get the opportunity to do more, it would be so awesome.

“Thankful for Dexcom. We wouldn’t be here without their support. But their technology allows me to get into the race car and do what I do each and every week. And to be able to monitor my blood sugar during the race. Just a really fun weekend and good to be back in the race track.”

As of press time, the race behind the wheel of the No. 17 for DGR-Crosley is a one-time deal, though Reed did say he has “opportunities and irons in the fire.”

“Hopefully they can come together and maybe some more stuff this year, and maybe a full-time gig in 2020,” he explained. “Right now, I do as much as I can this year and work back towards something full-time in another series. Nothing would make me happier than being back in a DGR-Crosley Tundra. Wherever the tide takes me.”

.@Matt_Crafton is among those who also collected damage in this accident. #Strat200 pic.twitter.com/Jq5sXSgWow

“Plug wire is off. Get Ilmor over here.” – Crew radios to CC

“I don’t understand how that happened.” – Grant

Not what @_AustinHill fans wanted to see.

He's forced to pit road in Stage 3 with overheating issues. He was 8th. pic.twitter.com/Z7kpBajvRo

Up Next: The Gander Outdoors Truck Series takes a couple of weeks off before heading to Martinsville Speedway Saturday, March 23. Race coverage begins at 2 p.m. ET on Fox Sports 1; the race can also be heard on your local MRN affiliate or SiriusXM NASCAR Channel 90.

It’s a little different getting wins in Cup.

I think its more like the bully who takes the kid’s lunch money.