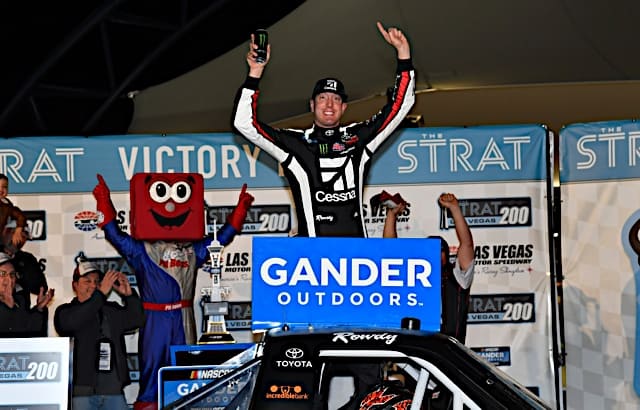 For as dominant a car as Kyle Busch had in scoring his 93rd career Xfinity win on Saturday, it did not come easy.

Busch’s troubles started early, as the Cup regular was forced to pit 15 laps into the race because of a loose wheel, and then spent much of the first half of the race battling through the field. Running third at the conclusion of the second stage, Busch took the lead around lap 112 and appeared to be riding off into the sunset.

Then, following green flag pit stops, teammate Christopher Bell made up nearly a second on Busch and began challenging for the lead.  Bell’s charge went unnoticed by Busch’s spotter, who went on a tirade over the team radio as he attempted to drive away. The ensuing battle allowed both Bell and Tyler Reddick to swarm Busch, only to nearly wreck each other battling for position. Busch again pulled away and seemed poised to score the win until Ja Junior Avila spun in the closing laps, bringing out a yellow flag that brought the leaders to pit road.

The ensuing restart brought a violent crash that sent Brandon Jones headfirst into the turn 3 wall after he attempted to block Cole Custer on the backstretch and sent the race into overtime. The first overtime saw Busch battling side by side with Reddick for the race lead, a battle that would see Reddick get loose under Busch’s Toyota and go spinning in turn 4, collecting a plethora of contending cars including Bell, Austin Cindric and JR Motorsports debutante Zane Smith.

With most of the powerful cars left in the field gone, the second overtime saw another pitched battle between Busch and John Hunter Nemechek pan out. Nemechek held his own down the backstretch, but was unable to keep up with Busch through turns 3 and 4. Nemechek finished second in Allegiant Airlines colors (the airline is based here in Las Vegas) with another Vegas native, Noah Gragson, rebounding from a nondescript day to finish third. Austin Dillon and Michael Annett rounded out the top 5.

“Sometimes the crew has to dig in, the driver has to dig in” said Busch of his adversity throughout the day speaking to the hometown fans in victory lane.

Ryan Sieg led the underdog performers, scoring a sixth place finish coming back from a pit road speeding penalty. Among the title contenders, of note was a DNF for Justin Allgaier, who bowed out 81 laps short of the finish after experiencing engine failure. Custer and Reddick were the day’s stage winners.

And just for the record. I hate all Cup dropdowns.

I may have missed it, but I do not remember many complaints about Dale Sr or Mark Martin driving in a lower series while they were also driving in cup. Nor do I read many complaints about Bell or Larson driving in any of the various dirt series.
I do not have a problem with cup drivers running in lower series.
I would like to see all of the bonus points, for winning a race or a stage, and all of the points for placing in a stage or in the race, be distributed to the highest finishing series regulars (and whoever else is eligible for such points).
As I understand the current system, any points a cup driver earns in Xfinity and truck races disappear into the ether and are not used by anyone; I would like to see all of those points distributed to someone (any equitable system for distribution of all of the available points is preferred to the current system).

Mark Martin and Big E didn’t have the dominant cars like Kyle. They were equivalent to the others and the regulars had an equal chance to beat them. Joe Nemechek beat Dale at Louden and Gary Balough beat Dale at Charlotte. Dale and Mark won because of talent and not because the cars were than the others in the field.

Should be “not because the cars were better than the others.”

Dale Sr. and Mark DID have dominant cars back then along with their talent.

The #18 Xfinity car doesn’t win with other drivers every week.
The difference between then and now, we have instant world wide access to voice our outrage, hate and skew it for drivers we don’t like.