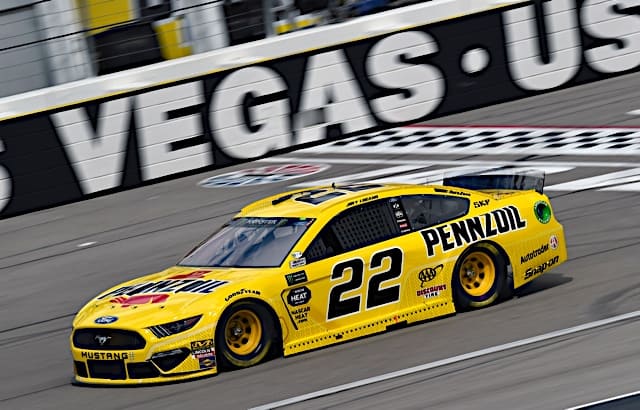 Brad Keselowski was the hunter and Joey Logano was the hunted Sunday at Las Vegas Motor Speedway. And in this hunt, it was Logano who survived the fight to score victory in Sunday’s (Mar. 3) Pennzoil 400.

The Team Penske teammates jumped to the top two positions and held them for a 40-lap run to the checkered flag. Slide job over slide job, chase after chase, Logano held on to win in the closest finish at LVMS since 2006 (0.236 seconds). It marked his first win at the 1.5-mile track and of the 2019 Monster Energy NASCAR Cup Series season.

“What a great race,” Logano said. “Brad and I were so evenly matched and you can’t just drive away. He was catching me so quick. To be able to get it there at the end was so fun.”

With a bold attempt at a slide job with 21 laps to go, Keselowski lost more than a second on Logano for the lead and didn’t have enough to repeat the maneuver.

“I passed Joey with the lapped traffic and caught a break,” Keselowski said. “Then lapped traffic cost me the lead and Joey pulled a slide job. I tried to pull it back and I was just a touch too nice to him.

“It was a really good day. I’m happy for Team Penske.”

Retweet to congratulate @joeylogano on his win at @LVMotorSpeedway! pic.twitter.com/INhuaFoASG

Indeed, the win was the second straight of 2019 for Penske, placing two of their three cars in the playoffs.

Kevin Harvick won stage one and led the most laps on the day (89). However, he fell back in the final stage and wound up fourth. Kyle Busch overcame a speeding penalty on lap 130 to finish third but stalled out there.

Busch claimed bad air as the reason for his problems, part of the new handling package drivers tried to figure out. The Vegas race was the first to debut the new air ducts and they helped to create aggressive racing on restarts. Nine drivers combined for 19 lead changes in a race that was fairly competitive up front; drafting maneuvers were used early and often.

But as green-flag runs wore on, cars would spread out, making it difficult to make up time in traffic. Pit strategy and long-run setups made the difference in a package NASCAR hopes will keep improving in the coming weeks.

The race went without a caution outside of the two stage breaks, tying the record for least amount of yellows at Las Vegas in 23 Cup events. Just one driver, Joey Gase, failed to finish while 18 cars ended the race on the lead lap.

Hold on tight folks.@joeylogano vs. @keselowski is already heating up, but @KevinHarvick and @KyleBusch are closing in! pic.twitter.com/BZHkcmfhbU

At least Kyle didn’t win for the sweep. I wouldn’t have cared if he’d won had he not run in the other series and won but I get sick of hearing how much sweeping all three races mean. As a top 5 driver in MENCS winning Sunday’s race is an accomplishment worthy of praise. To beat the underlings in trucks and xfinity, not so much. If more cup drivers ran all three races there would be more sweeps and after a while people wouldn’t think much of it, but no one else runs all three races as much as Kyle so it seems more impressive than it really is.