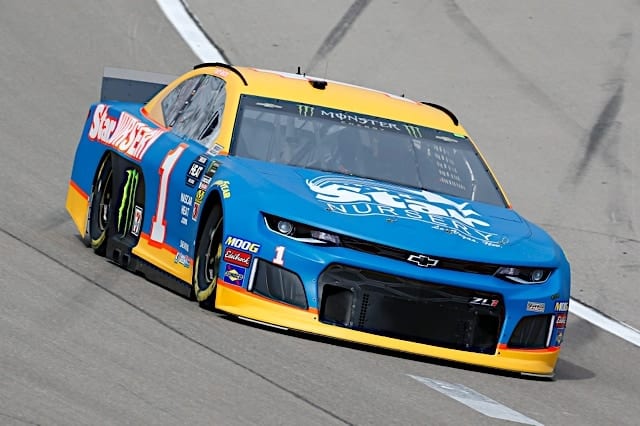 Hometown cooking, a little bit of luck and a fast racecar was the recipe for Las Vegas native Kurt Busch to score his second consecutive top five finish to open up the 2019 season.

The driver of the No. 1 Star Nursery/Monster Energy Chevrolet for Chip Ganassi Racing stayed out to begin the third and final stage of the Pennzoil 400 and restarted in the lead. Despite having older tires than the rest of the field, Busch was able to stay put firmly inside the top five and held on for the remainder of the event to finish fifth.

“I was really happy that we were able to stay out long,” he said. “We didn’t get any stage points today, but it positioned us well to make a run at the checkers and we got fifth today. The power of those first few guys altogether it’s aero, it’s engine, it’s handling and that is what we have to work on. I’m really happy with two top fives to start the year. We are playing it smart. We haven’t had any penalties and we will just keep chipping away at it. So, good day for our Chevy, I think we might be top Chevy again.”

Busch’s car drastically changed for the better in clean air, helping him keep the track position.

“It played out where we got clean air and it completely changed the complexion of the car,” he said. “And that’s what we have to do. When we’re in clean air, the car is like this. When we’re in dirty air, the car is like that. I’ve got to get it to where its balanced evenly. But it gave us a lot to learn from today and I’m really proud of everybody to get a top five.”

As a whole, the 2003 champion is very pleased with the start of his chapter with CGR. Two top fives and strong runs in both give the No. 1 team momentum heading into the rest of the West coast swing.

“Right now we have fundamentally started the season as strong as we can,” he said. “Not making mistakes and we’re having fun. I expected to have good moments. The consistency of the car is there, we just need that power feel, of that attack and make sure we’re the ones making the right calls instead of piecing together the calls.”

The debut of the new aerodynamic rules package in full proved for sone trying times, specifically on restarts, as cars were three and four-wide, multiple rows deep.

“The package was insane on restarts,” he said. “The adrenaline, the activity, everybody racing harder, three-wide, you didn’t know where cars were going to come from. And yes, cars did get strung out, but handling comes back into play.”

Busch also had his first ever sponsor in racing, Star Nursery, on the car for Sunday’s race, an ode to the company who helped him get started 20 years ago.

My favorite (and probably everyone else’s) paint scheme of the week. ?? but there’s more to the story…

I talked to a @StarNursery employee this morning who said they didn’t pay @CGRTeams a dime to sponsor the car.@KurtBusch footed the entire bill. ?? pic.twitter.com/RjTssNcwIS

“Chip Ganassi, I do have to thank him because he discounted the car pretty heavily,” he said.”But it’s neat to pull it all together. Now with a top five run maybe we need to make diecasts. Maybe we’ll make those when we’re back there in September.”

The reaction of Star Nursery employees when they found out Busch would be donning the blue and yellow in their backyard was nothing but smiles, high fives and hugs. Busch was just glad he could help out the company who helped him out two decades earlier.

“The cars are expensive in this day and age and we don’t want to make a big deal about the pricing,” he said. “But it came from our heart, and it was neat to have the Star Nursery paint scheme on our car after 20 years from when we won the championship. But this is a big time business, there are big sponsors involved. I’m glad Monster Energy was accepting of it as well. Ill have to do a few extra appearances for Chip to pay off the debt, but it was a lot of fun.”

The Monster Energy NASCAR Cup Series heads to ISM Raceway next weekend for the Ticket Guardian 500 on Sunday, March 10.