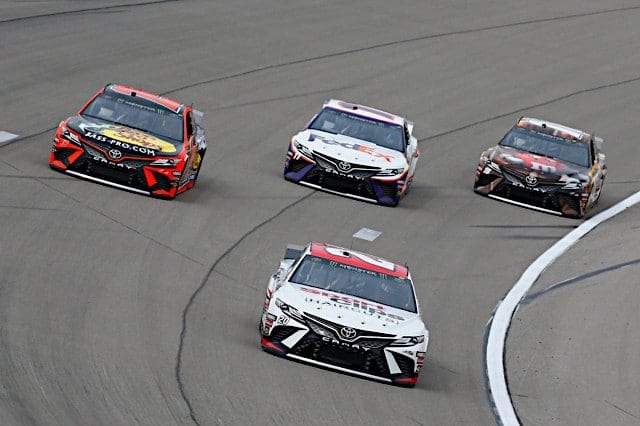 If Sunday’s Monster Energy NASCAR Cup Series race at Las Vegas Motor Speedway is any indication, what is new is old again.  After an offseason of making plans, running tests and speculating what the future might hold, NASCAR used the full version of its new Cup Series aero package for the Pennzoil 400.

The cars were outfitted similarly to last weekend at Atlanta Motor Speedway but included aero ducts for the first time.  The ducts, positioned low on the front bumper of every car, were designed to change the way air flows around the car at speed.  They were the final addition of a package designed to increase downforce, magnifying the effects of the draft and leading to closer racing with easier passing.

But none of that happened at Las Vegas.  In fact, the racing in Sin City looked exactly the same as it did one year ago.

For a race where nobody was sure what to expect beforehand, there were lots of familiar results and themes for intermediate tracks.  Track position was king.  Passing was difficult, especially near the front of the field.  Most action happened immediately following restarts.

There were no “cautions for cause,” as the FOX broadcast team has taken to calling them, with only the stage cautions breaking up the race.  The top contenders were Ford drivers, plus Kyle Busch, and Joey Logano wound up beating everyone in the end.

Granted, it is not like NASCAR failed to change the way the cars race or feel to the drivers.  Friday’s qualifying session displayed just how important drafting can be with this package.  As Bryan Keith explained, group qualifying could be problematic going forward if NASCAR continues to use this package.  But at least the cars behaved the way NASCAR intended them to, for better or worse.

Furthermore, most of the drivers who have commented on the new package appear to be frustrated by the horsepower reduction.  Thanks to the addition of tapered spacers, drivers have reported little to no off-throttle time even at a track like Las Vegas.  The result is that while average speeds per lap are down from last year, drivers are going about as fast as they did through the turns last year.

At Atlanta, it was only noticeable that the cars had less horsepower at the ends of the straightaways.  On Sunday, any reduction of horsepower compared to last year was not noticeable at all.  If the cars are going slower, they don’t “look slower” to the fans, and they certainly do not look as slow as the cars in last year’s All-Star Race.

But the problem is that NASCAR was not aiming for slower cars in general.  The goal was to sacrifice some speed in the name of tighter racing and easier passing.  Those goals were not met, despite the loss of speed.

That’s not to say that Sunday’s race didn’t have some fun moments.

Kurt Busch and Brad Keselowski fought off challengers for the lead on old tires.  Kyle Busch ran down Logano during the second stage, and their battle for the lead was quite entertaining.  Not to mention Keselowski’s last gasp charge that might have been only one lap too late.

Yet none of those moments were a function of the new aero package.  Keselowski and Kurt Busch benefited enormously from clean air while leading, an advantage that this package was supposed to combat.  Kyle Busch’s drive through the field was a product of lane choice and the excellent car control that he often displays.  It was not as if Busch was dicing his way through the field superspeedway-style, catching optimal drafts off other racers.  Even the Logano–Keselowski battle at the end was largely because the Team Penske drivers took turns getting caught up in lapped traffic, and that is certainly not a new phenomenon.

So where do we stand with the new package after Las Vegas?

We have qualifying that could be radically different, but not necessarily better, depending on the venue.  Some drivers are not happy, but that was to be expected given the horsepower reduction.  Sunday’s race had some good moments, but they were too few and far between to make the race really memorable in any positive way.

Worst of all, NASCAR spent the whole offseason billing the new aero package as something different, something that could revolutionize racing at the intermediate tracks.  What we saw on Sunday was not markedly worse than 2018, but it certainly was not different.

Effectively, NASCAR appears to have taken throttle response and horsepower away from the drivers without actually making the racing better.  And that is frustrating, not just for NASCAR after all the work that has gone into developing this package, but for the fans who have stuck with NASCAR through all the turbulence (lots of it self-inflicted) of the last 10-15 years.

Sometimes, it feels like all of NASCAR’s stakeholders, fans included, are lost in a swamp in Florida trying to find the fountain of youth that is consistently compelling racing at intermediate tracks.  Everyone wants to believe so badly that there is some magic combination of car setup that will produce reliably great racing at tracks like Las Vegas.  But given the advantages of clean air and the aero dependency of the cars, it may not exist.  It is not like NASCAR can force team engineers to unlearn everything from the last 25 years, and the sanctioning body certainly cannot change the laws of physics.

Some fans have clamored for the higher horsepower days of 2014, before NASCAR initially started experimenting with tapered spacers.  Others suggest trying to emulate intermediate track racing of the mid-2000s.  But all of those seasons had issues with overly aero-sensitive cars as well.  Remember that NASCAR originally designed the Car of Tomorrow to be boxier in an effort to make it less aero-dependent.  Suffice to say that the sanctioning body is still fighting the same battle 12 years later with a whole different generation of car.

It is worth commending NASCAR for trying to find an aero-based solution to the problem, such as this package.  There is a lot of racing left to go in 2019, and maybe this package will work better at other tracks.  But the early returns suggest that there is going to be no real difference between this year’s racing and last year’s.

For now, we are all still wandering through the swamp.

Want to improve the racing? Ok, let’s get the cars (at least the bodies) a little closer to stock. When I started following NASCAR in the 70s, the cars were built to fit (mostly) within the templates of their street counterparts.

So, why not start there? Get rid of the squared off rear fenders… not a street version of the current race car has squared off rear fenders. Next, put the radiator openings back where they belong. Third, dump the splitters, the side skirts and the shark fins… Next, cut the spoiler back down to last year’s height. These cars are just not providing the spectator what they want… good racing. Make the cars less if not nearly completely free of the influence of aerodynamic dependency. I’m not certain any of the drivers today could race the cars of the 70s/80s….

Here’s an idea for better racing…cut back on the number of 1 1/2 mile tracks! The races at these tracks tend to be identical unless you have an Atlanta with worn out pavement. Race at Iowa. Go back to IRP or whatever they call it now. Try The Rock again, Nashville. Identical track lead to identical races. DUH. Variety used to be a part of Nascar. And with attendance like it is, maybe smaller venues with less seating will produce full stands again, and tickets at a premiun the was Bristol used to be.

Chuck, you are 100% correct. You are on the same path I am. The cars now are so aero dependent. They are built to maximize 100 % of the air. Then when the cars are in a pack; which stock car racing was built on, the cars can’t race because of less air.
The current cars would race better if the body was even on both sides. Put a center line template on the cars and each side is the same. No flared fenders, no ledges at the windows. Do what Chuck said and put the radiator opening at the normal grill opening. Lose the squared off rear fenders.. Lose the stupid splitter. Get the cars off the ground. Give the cars full power. A top fuel dragster would have a hard time turning at speed. It doesn’t matter how much power you have but you need to get it to the ground and make the turn. So the best handling car and bravest driver that will hold it one second longer will be heros again.
Just look at the racing from Pocono and Michigan from 1974 to 1987 and see what I am saying.

Oh and I forgot ditch the side skirts

The cars need to be different from one another. Suggestions: vertical windshields, so splitters, no fins, no specified shocks, no specified gears, & the ability to adjust the spoiler (at one time teams could adjust the angle).

I agree with all of the ideas voiced here, but I think along with changing the aerodynamics, the allowing any gear ratio would have the biggest change in racing. It would allow the engine builders and transmission shops leeway in finding that special drive set up that no one else has tried. It might make it tough for those with an engine lease, but that one engine builder might find the extra speed for any given weekend. It might also add some cautions due to engine failure, but I would prefer that to a competition caution, debris caution or stage racing.

Get the cars off the ground and open up the grills ….this dirty air and aero push …who needs it