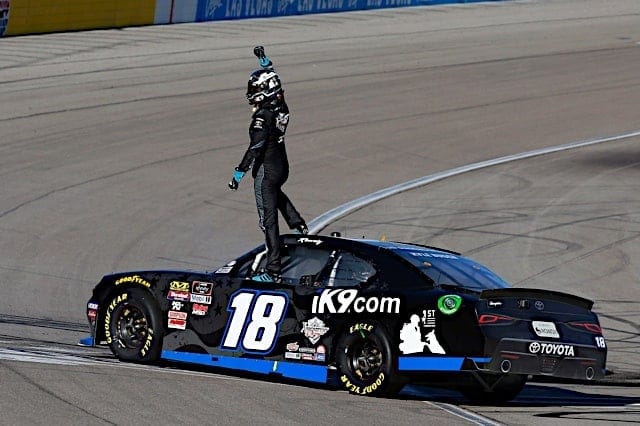 There was a brief period of time, early in the Boyd Gaming 300, when it looked like Kyle Busch was not going to win, that it just wouldn’t be his day. That feeling came after Busch had to come to the pits for a loose wheel in the first stage.  His anger was justified, as you know there’s plenty of time before a race starts to get the wheels tight.

But we’re talking about the all-time winningest driver in Xfinity Series history running in Joe Gibbs Racing equipment that is always either the best or right up there. Once Busch got back on the lead lap, it felt like a fait accompli that he would head right to the front.

That premonition came to be as he did, of course, prevail, collecting his ridiculous-in-a-good-way 93rd Xfinity victory. “Rowdy” Busch got to take his signature bow for the second straight night in front of his hometown fans at Las Vegas Motor Speedway, having won the Friday night race in the Truck Series, where, he also has more wins than any driver ever.

“It’s cool to come out here and be a part of Las Vegas, and be in the hometown, and having the opportunity to race in front of my hometown,” Busch said in Victory Lane. “Having a rookie crew chief like Ben [Beshore] and being able to get him his first win … I don’t know how many crew chiefs I’ve won with in the Xfinity Series, but the list is a long one, and I’m appreciative of all of them.”

NASCAR fans are also growing increasingly appreciative of Busch’s career exploits. There will always be fans who don’t care for him because of the way he embraces the heel role in many situations, and comparing his victory total to Richard Petty’s seems incongruous to them. The TV crews sometimes get a little carried away too, because let’s face it: Busch should win most of the lower series he races in thanks to his combination of talent, experience, and resources. That doesn’t take away from his greatness, especially on days like Saturday in Vegas where things started out rocky and he still came out on top.

There was plenty of good for the first time in the 2019 season. After a bit of a lag in the middle part of the race, business picked up in the final stage, when it appeared that either Christopher Bell or Tyler Reddick, or maybe both of them, had faster cars than Busch. In one thrilling sequence, Bell was able to pass Busch on the inside despite the outside groove working better for him. He then got passed right back, had a close shave with the outside wall, and bumped into the hard-charging Reddick, with both drivers somehow managing to not spin out.

After @CBellRacing takes the #XfinitySeries lead, he gets the wall, and then gets into @TylerReddick as @KyleBusch escapes!

A caution with 12 laps to go robbed fans of seeing if Bell could reel Busch back in before he ran out of laps, but still led to a wild finish that required two overtime restarts to settle things. After the smoke cleared and Busch was doing his burnout, a handful of drivers ended up with very good days, including Noah Gragson, who struggled early but finished a strong third.

“Just taking notes in my brain and trying to learn. We have one goal, and that’s to get to Homestead, so this is great motivation for our Switch/JRM team. We just need to keep our heads down and keep on digging.”

Other drivers who fit that description on Saturday were Ryan Sieg and Ross Chastain, who finished sixth and seventh, respectively. Those two drivers were given a shoutout after the race by Brad Keselowski, who teamed with Kevin Harvick for the first time in the FS1 booth in what made for an excellent pairing of analysts. More Kes and Kevin, please.

For the show they put on, Bell and Reddick didn’t end up with the finishes they seemed to deserve with 13th and 14th place finishes, respectively. Just before the white flag flew that would have ended the race one way or another in the first overtime, both drivers spun out across the track and collided with other cars — with Zane Smith hitting Reddick while Austin Cindric, having already battled back from earlier problems of his own, smacked into Bell.

Both drivers picked up plenty of stage points, with Reddick also nabbing a stage win. It just wasn’t the kind of ending either envisioned when they were dueling it out with the best to ever do it in the Xfinity Series.

“You have good races and bad races,” Bell said. “Obviously, that’s not where we want to finish, but that was one of the most fun races I’ve ran in the Xfinity Series. Obviously, all of our Joe Gibbs Racing Supras were really, really fast, and I’m really proud of everyone on this team (No.) 20 car.

‘It was unfortunate that I got into the wall and [Busch] got back by me, but ultimately, we didn’t finish good because of my restart errors. Just got to clean up restarts and do a better job of that, and hopefully, we’ll be able to close out a couple more of these.”

Also bad: With less than 50 laps to go, FS1 came back from a commercial break, cut to the guys in the booth as Keselowski was talking about his foundation (which is great and doing terrific work, but maybe at least show the on-track action while he discusses it), left for another break, came back and joined the race for about five minutes before Adam Alexander said, “We’re going to take a break.” It was a pretty poor sequence in an otherwise very enjoyable broadcast.

With eight top-10s in nine career Las Vegas Xfinity Series starts, it would have been a good bet that Justin Allgaier would have figured in the mix somehow on Saturday. You’d have lost that bet, though, because his No. 7 Chevrolet engine knocked him out just past the halfway mark, relegating him to a 31st-place finish.

A whole different kind of ugly was the hit that Brandon Jones took that forced the first overtime. After running in the top 10 or even better most of the afternoon, his No. 19 Toyota ended up a crumpled mess of the kind that drives home how important the safety features of today’s cars and tracks are to helping drivers escape serious injury.

Brandon Jones is okay after this violent hit in Vegas. pic.twitter.com/Ys8os1oZiU

There were plenty to pick from thanks to the incident in the first overtime, which took out a number of strong cars. We’ve already mentioned Sieg and Chastain, but props also go to Ray Black Jr. (who finished 11th) and Gray Gaulding (12th). Basically, any time you have a ‘0’ as your leading digit and you nearly come away with a top-10 result, you’ve had a strong underdog day.

We should make that an official rule.

Maybe we should call this Double Duty Dominators when Busch is involved, though he didn’t really dominate the race as he sometimes does so we’ll save that for another time. Alliteration is always a good thing, though.

The other Cup Series regular who dipped down on Saturday was Austin Dillon, who was hamstrung by the field being set by owner points and started way toward the back. He wasn’t a factor for the first 200-plus laps, the all of a sudden be was third on the restart in the second OT. Alas, he got shuffled out pretty quickly when the race went green, but he still came home fourth. Not too shabby, all things considered.

“Supra, Supra. Christopher did the same thing last week, I was like, ‘You idiot.’ Now I did it too. You idiot!” – Kyle Busch, after referring to his iK9 Supra as a Camry

“I thought this was going to be the toughest of the three. I knew we had a fast race car, but we could just never get the balance, even in the race right there, I was either way too tight or way too loose.” – also, Kyle Busch, when asked about his chances for winning all three races at a track in one weekend, a feat only he has pulled off before

“We gave him a run for his money. I matched his restart. I’ve been beat by Kyle too many times, through the Late Model days and now into the NASCAR Xfinity Series, so hopefully, we can come out on top.” – runner-up John Hunter Nemechek

If the Boyd Gaming 300 could be summed up in one word, it would be “finally.” After a lack of drama in the season’s first two weeks, there was plenty of that at Las Vegas Motor Speedway, even with the heavy favorite taking the checkered flag.

One of the selling points of Cup Series stars being allowed to race a few times in the Xfinity Series each year is for the up and comers to test their mettle against the best, and Bell and Reddick both did that admirably on Saturday. Bell is almost certainly destined for stardom at the next level, but maybe we’ve all been sleeping a bit on Reddick despite the fact that he’s the defending series champion. He arguably took a slight step down in equipment going from JR Motorsports to Richard Childress Racing (sorry RCR, but it’s true, and only a slight step), and he looks perhaps even more formidable on a weekly basis than he did in 2018.

In any case, the Boyd Gaming 300 was high on entertainment value, not necessarily from start to finish, but a majority of the time and definitely when it mattered most.

To a different desert, we go, as in Phoenix and ISM Raceway. It’s a race that’s been won by Cup Series regulars five of the last six years, but Allgaier snuck a victory in there, so hope springs eternal.

Yeah, well, its The Bush leagues. Pros playing down to AA and AAA teams to feed their ego… Nothing else.