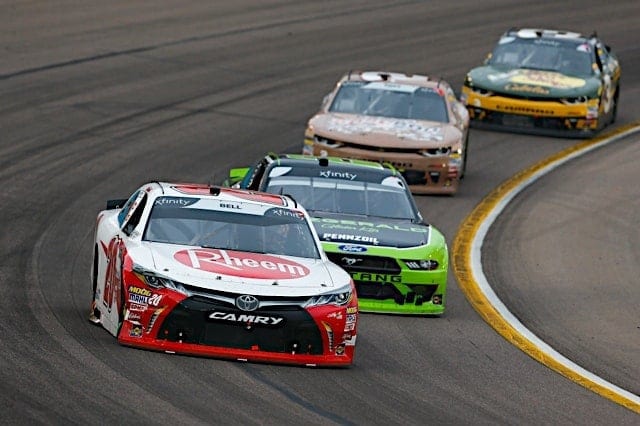 NASCAR has released the preliminary entry list for Saturday’s Xfinity Series race at ISM Raceway in Avondale, Ariz. 37 drivers are entered for the iK9 Service Dog 200, so it would be short of a full field by one entry.

This week, Ryan Truex will drive the No. 8 JR Motorsports Chevrolet, replacing Zane Smith. The Martin Truex Jr. Foundation will serve as primary sponsor in order to advertise their annual Catwalk for a Cause, which is designed to raise cancer awareness and raise funds for cancer research.

Kyle Busch is the only Cup Series regular entered in the race. He will again drive the No. 18 Joe Gibbs Racing Toyota. Busch won the most recent Xfinity Series race, the Boyd Gaming 300 at Las Vegas Motor Speedway.

Ronnie Bassett Jr. will make his Xfinity Series debut driving the No. 90 DGM Racing Chevrolet. Bassett has been a long-time competitor in the NASCAR K&N Pro Series East, making 67 starts over the past six seasons. He has one career victory at New Smyrna Speedway in 2017 and finished a career-best third in points that year as well.

This week, the No. 99 BJ McLeod Motorsports Toyota will be driven once again by Tommy Joe Martins. Martins finished 31st in his season debut at Atlanta Motor Speedway, two races ago. Martins replaces JA Junior Avila, who wheeled the No. 99 Toyota to a 25th-place finish.

While NASCAR’s entry list currently has John Jackson as the driver of MBM Motorsports’ No. 42 Toyota, it remains to be seen whether regular driver Chad Finchum will drive the car. The team’s No. 13 Toyota does not have a listed driver. In Las Vegas, Stan Mullis drove the No. 13 Toyota to a 35th-place finish.

The other entry without a listed driver is Rick Ware Racing’s No. 17 Chevrolet. Bayley Currey has driven the car for the last two weeks. He finished 22nd at Atlanta and 34th in Las Vegas.