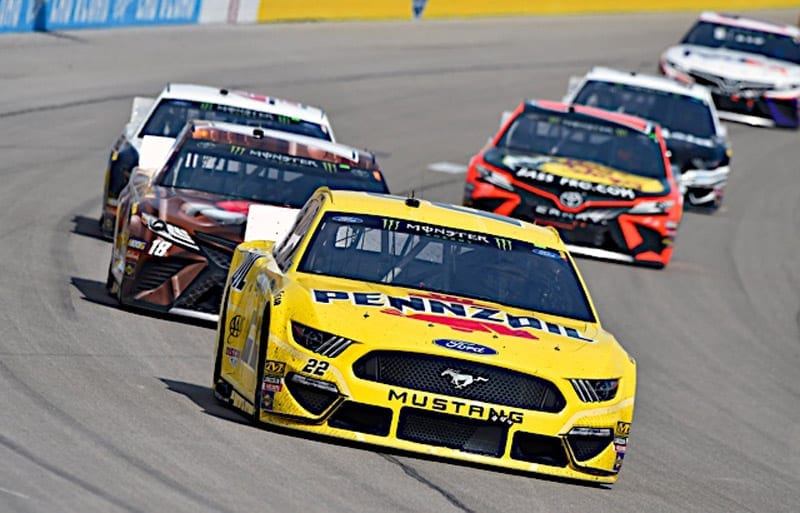 Joey Logano had a reason to feel good about the 2019 aero package (credit: Nigel Kinraid)

The package includes tapered spacers to reduce engine horsepower at tracks one and a half miles and larger, as well as a taller spoiler to increase downforce, along with other features. Las Vegas became the first “true” showing of the package, and the reactions led to ongoing discussions of the benefits and detriments of the new setup, which raises the question: is the 2019 aero package good?

Out with the New, In with the Old

While one might argue that benefits abound with the new package, there’s an artificiality to it that eats at the nerves of racing fans.

It’s painfully clear how the new package affected the racing. At a track like Las Vegas, you’d normally see cars flying through the corners and down the backstretch. But with these new rules, it’s evident that the cars are much, much slower. Even on television, the cars seemingly crawled down the frontstretch, visibly slower than normal.

The racing itself contributes to an air of artificiality. The racing is much closer, and, while we all enjoy tight battles and great racing, the fact that it’s caused by the new setup lends itself to feeling inauthentic.

This situation is similar to the criticism after last year’s All-Star Race where similar situations appeared — it’s more or less a manufactured form of racing that’s aimed at drawing in fans, building ratings and increasing attendance.

Kyle Busch said the package reduces the skill of the drivers’ effect on the cars. While not completely true, the reduced horsepower leads to drivers keeping the throttle wide open, as well as seeming to depend more on the cars’ setups rather than the drivers’ performance, as opposed to an equal pairing of the two.

Along with these new rules came a revised qualifying format, which also led to widespread debate. With shortened times, drivers sit in their cars on pit road until enough time ticks away, speeding out for a hot lap or two just before time expires. This results in three-, four- or even five-wide situations when exiting pit road.

It’s only a matter of time before there’s a collision or pileup on pit road and someone gets ticked off or even hurt. Las Vegas’ later rounds of qualifying featured these close calls several times — five, 10, 15 cars hightailing it off of pit road at one time.

It would be better for NASCAR to listen to multiple sources — drivers and fans included — before making any more changes. -Adam Cheek

One Small Step for Air Ducts…

There was actually some buzz surrounding the race after qualifying on Friday produced a flurry of activity and some gamesmanship on pit road and some drafting antics on track. While some drivers had some harsh words for the new package after qualifying — Ryan Newman, most pointedly — it actually helped set the stage for something other than the malaise which typically washes over glazed eyeballs when it comes to an intermediate track for the top touring division.

So much so that for the first time in what feels like forever, there was a measurable lift in viewership for the event — up 8 percent year over year. An 8 percent YoY metric in most businesses will get you raise or a bonus. For NASCAR, it meant 5.1 million eyeballs on a Sunday afternoon.

It was also the most watched sporting event of the weekend.

What followed during the race and after were a flurry of stats citing green flag passes (2,379 last year compared to 3,345 for 2019), passes for the lead (11 in 2018 versus 19 for 2019) and a last-lap battle for the win between teammates Joey Logano and Brad Keselowski, with the No. 2 Team Penske Mustang coming perilously close to clipping the No. 22 Pennzoil Ford as they came off of Turn 4 coming to the checkered flag.

Kyle Busch’s pit road speeding penalty saw him carving through the field in a desperate attempt to get back in position to contend for the win if a caution flew was the real story of the final stage, but unfortunately for the No. 18 team, that never materialized.

That is an important side-note, as it shows that it is possible to pass with this package if the car is fast enough or able to run where others cannot. Dirty air is still an issue, but name a series other than Monster Jam or NHRA Drag Racing where it isn’t.

Is this package perfect? No, but it’s providing a baseline to work off of. Any thought that it was going to be five-wide coming to the line would be foolish, of course, but what more are people looking for?

YouTube a Las Vegas race of sugary nostalgia from the do-no-wrong NASCAR of the late 1990s or mid-2000s. Does it really look much different than what we saw Sunday, the finish in particular?

Let’s give things a few months to work out and check back after Auto Club Speedway and Texas Motor Speedway. It’s an easy package to add power to if needed or remove downforce in the back if that helps things out.

After years of being seemingly buried up to the axles in mud, desperately spinning their tires and expecting to become unstuck, NASCAR is actively working to try new things and make adjustments to help improve the product on the track. While not a cup-runneth-over result on Sunday, it was at least palatable and gives one some hope for the first half of the season. –Vito Pugliese

Until the drivers have cars that the crew chiefs can adjust to the driver’s liking, and NA$CAR admits that the CARS are the problem, they are just chasing their tail.

While I appreciate the fact that Nascar is trying to do something…anything…to make the racing more attractive, just gumming up the works with more fiddling just doesn’t make it. I f you want reduced horsepower, use 6 cylinder engines. If you want less aero dependence, get rid of the ground effects that need air to keep the cars pinned to the track. If you want more interest in each race, quit having so many races on identical tracks that tend to produce identical racing. One does wonder if they polled crew chiefs around the garage, that they couldn’t come up with ideas that would benefit everyone instead of trying to tailor setups and ducts to every track?

Wait till the stinker they are going to have in California. Everyone will be screaming like mashed cats then! Sorry kitty.

You wanted parity- you got parity. Maybe it was better in theory than practice.