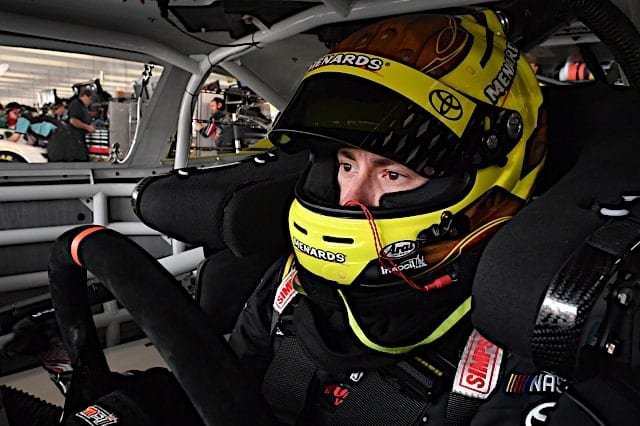 In 2017, Brandon Jones struggled all season long while driving for Richard Childress Racing, failing to reach the postseason. The Georgia native needed a change.

That change came in 2018 when he moved to a new company and manufacturer and started working with new people at Joe Gibbs Racing. That same change led to Jones have a career year.

For the first time since running a partial schedule in 2015, Jones cracked the top five (twice), while posting 17 top-10 finishes. In 71 races at RCR, he had 17 total top 10s. In JGR’s No. 19 car, he also paced the field for 173 laps, 106 of which came at Bristol Motor Speedway in mid-April, which followed a race at Texas Motor Speedway where he picked up his first career stage win.

“I thought 2018 was great,” Jones told Frontstretch. “I know we didn’t add a win to the list, but we had probably four or five shots at being able to compete for a win but just had wrong things go our way at times. I thought we contended and showed that we were there for the majority of the season.

“Bristol was probably our biggest turning point. I wish we could have won that one. But there were, even more, we were leading and got into some stuff. We’re going to try and minimize our mistakes and learn from our experiences.”

Ultimately, Jones was adapting to the way Toyota runs its program. In addition, he was adjusting to Chris Gabehart as his crew chief — the same crew chief that won nine races at JGR between 2016 and 2017 between four different drivers in addition to this yearʻs Daytona 500 with Denny Hamlin.

Compared to when Jones wasn’t really a factor in races, his confidence began to skyrocket — boosted by the knowledge that he was with the same company that has dominated the NASCAR Xfinity Series the past decade.

“I’m pretty good at forgetting and trying to go for it,” Jones said of his confidence level. “I just try to learn from mistakes. Every week I sit down and say, ‘What are the reasons you wrecked or had a bad weekend?’ Then, I try to build on that from there.”

That first win is still eluding Jones, though he did record a second-place finish at Talladega Superspeedway to Spencer Gallagher in 2018. He believes if he can crack through and notch that first win, more will follow.

“I think just in your head you’ve proven to yourself that you can do it, so now I go throughout the ‘I don’t know what to do type situations,’ and just act like a veteran out there,” Jones mentioned. “Running up front definitely helps that out.”

In contrast to his previous seasons at RCR, Jones is already at another level because he regained the confidence he once had. You know, the confidence earned by winning five ARCA races in 23 career starts.

He believes that if a driver straps into a race car with little to no confidence, they have already been defeated.

Driving for JGR is a confidence-booster in itself.

“It gives you a lot of drive to wanting to learn and figure out how they’re achieving the success level,” Jones said. “It’s not just climb into the car and being able to win the race. There’s a lot that goes into it, also.”

But while Jones was top 10-ing the field, Christopher Bell, his JGR teammate, was dominating races en route to a rookie-record seven victories. And, oh yeah, Ryan Preece won in a partial schedule, as did Kyle Busch.

That can be demoralizing as a race car driver, knowing you’ve got the same equipment but haven’t taken the checkered flag in first. But for Jones, it’s hard to pinpoint where he can improve compared to his JGR teammates.

“It’s hard for some of those guys to tell you what’s going on with the car,” Jones said. “Some people just have different feels for things, so I think that’s where some of that success comes from. We’re going to try and do just as much this year.”

Adding Jeff Meendering as crew chief (he led Cole Custer to the Championship 4 in 2018) has upped Jones’ performance through the first three weeks of the 2019 season. For the first time in his career, Jones posted back-to-back top-five finishes. The No. 19 crossed the finish line third in the season-opening race at Daytona International Speedway, and Jones backed it up with a fourth at Atlanta Motor Speedway.

Last weekend at Las Vegas Motor Speedway, Jones ran in the top five for the majority of the race, but was dumped by Custer on lap 198, finishing 28th. Now, the No. 19 team sits fourth in the championship standings.

But for Jones, the goal remains the same: win.

“I’m trying to knock a win off my list,” Jones added. “Once we get one of those, the confidence comes up even more, and we’re going to get some more after that. That’s my goal. I’m going to try and get a win. We’re going to keep pushing until we get that.”