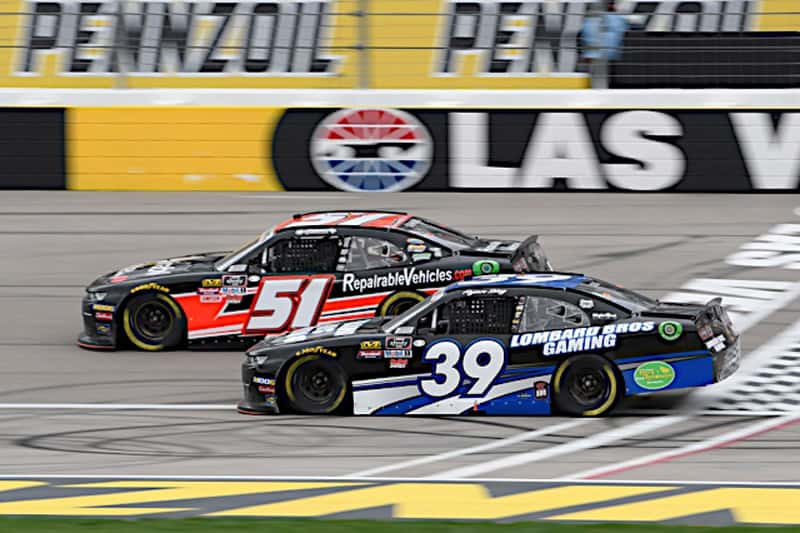 This year, we have seen the Xfinity Series start off with some surprises, with some underdogs performing unexpectedly well. Michael Annett scored his first career win in the season opener at Daytona, much to the surprise of many, and the trend of good runs has continued for him as well.

Two of these drivers who have impressed include Brandon Jones and Ryan Sieg. Both have had sub-par results for their entire career in the Xfinity Series but this year, they are starting off the year stronger than they ever have before. Could one of them be the next first-time winner in the series or will it be somebody else?

Kyle Larson has had his fair share of struggles to begin the 2019 season. Although he showed a ton of speed at Atlanta, leading the most laps, a pit road penalty cost him a chance at the win. Las Vegas was the same story, minus the most laps led, where a pit road penalty had him battling from behind all day long. He managed a decent finish but not the one he was looking for.

When will Larson break through and find Victory Lane again? What are the expectations for him this season? Are they greater than ever, or just hoping he will win again soon?

Q: In the Xfinity Series, who do you think could be the next first-time winner? Who has impressed you as well to start the year? Samuel T., Akron, OH

A: Let me start off by saying the Xfinity Series is always very entertaining to watch, and there is a ton of competition this year, even more than we saw last season. As for a first-time winner and who could be next, this may surprise some people, but I am going to say, Brandon Jones,

This is his fourth full season in the series and his second driving for Joe Gibbs Racing. Last year was a little bit difficult for him as he made the playoffs but didn’t do much once he got there. Jones is off to a solid start this year, finishing top five in two out of the three races. If it was not for a late race crash, he would have more than likely ended up in the top five in Las Vegas too.

As for my surprise and who has impressed me to start the season? How about Ryan Sieg and the No. 39 team. Two top-10 finishes in the first three races of the season is a very strong start for a small team. Sieg has had some success in the series, making the playoffs back in 2016, and finishing ninth in the points, his best year in the series. This season, though, he is off to an incredible start.

The team has obviously done its homework over the offseason and have been very competitive in the first few weeks as a result. To put his start into perspective, his career high for top-10 finishes in a season is three. He is at two and we’re only three races in. It is safe to say he will eclipse that mark by a mile as long as he keeps up the good runs.

They do not seem to be on a race-winning level just yet, but competing for top 10s every week is definitely an excellent start and major progress from where they have been in the past. Sieg is a great driver and has proven that over time, out-performing the equipment underneath him.

Winning a race this season may be a little far fetched right now, but I would not be surprised to see him run near the top five as we get deeper into the year, especially once the standalone weekends roll around.

Q: What expectations should we have for Kyle Larson as the season goes on? Alan N. Madison, WI

A: Larson, as we all know, is one of the most talented racers we have seen come into the sport in the last decade. I am not concerned at all with his “slow” start to the season, because he had a ton of speed at Atlanta and only a penalty hindered his final result last weekend in Las Vegas.

Results have not been there for Larson yet this season but we all know he will get going at some point. Even though he is enduring a winless streak right now, I fully expect him to break that this year. He is with a good team, and he knows how to win at this level. Where there is some concern given that Larson did not make it to Victory Lane in 2018, it was not for a lack of speed as he came close to taking the checkered multiple times.

Think back to the incredible finish at Chicagoland with Kyle Busch when he was in the lead going into the last corner, but the two tangled and Busch came out the winner. He led the most laps at the Charlotte ROVAL but was caught up in a late-race wreck. The same story over and over again: close, but no cigar.

He is now in his sixth full year in the Cup Series. He has a total of five career wins, but if we look at the number of times he has led the most laps, and just had some bad luck, he could have added many more wins to his name.

Once Larson figures out how to keep and maintain the lead all the way to the checkered, he is going to win five to six races in a season on a consistent basis, just as he did when he won four of them back in 2017.

And despite some apparent pushback from some in the NASCAR community, I do not believe his love of dirt track racing at all takes away from his performance on Sundays.

My prediction: he wins three races this year. Based on Atlanta, if it was not for the penalty, he definitely had an excellent shot at winning that race. I have a lot of confidence in his ability and I fully expect him to get the job done again very, very soon.

….Ah the excuses for Larson continue to pile on. Other drivers have not had the same excuses afforded them in the past. Well a few. But overall, he is his own worst enemy for some time now and the media overall fawns over him. Imo.

In no way are Sieg’s results subpar… the reality of it is that Ryan is doing exponentially better than your average Brandon Jones-esque pay driver. Put Jones in the 39 and he’s outside the Top 25, easy. I don’t understand why underdogs are always shuffled aside when some of them are driving the wheels off of their machines, IIRC Clements drove to the win in a chassis from 2007.

Kyle for sure has the talent to run up front every week and win. But he continues to have mental lapses on pit road and when he’s running the wall. If your going to run the wall constantly you cannot allow your concentration to waunder for a moment but Kyle seems to. Lots of little mental errors.