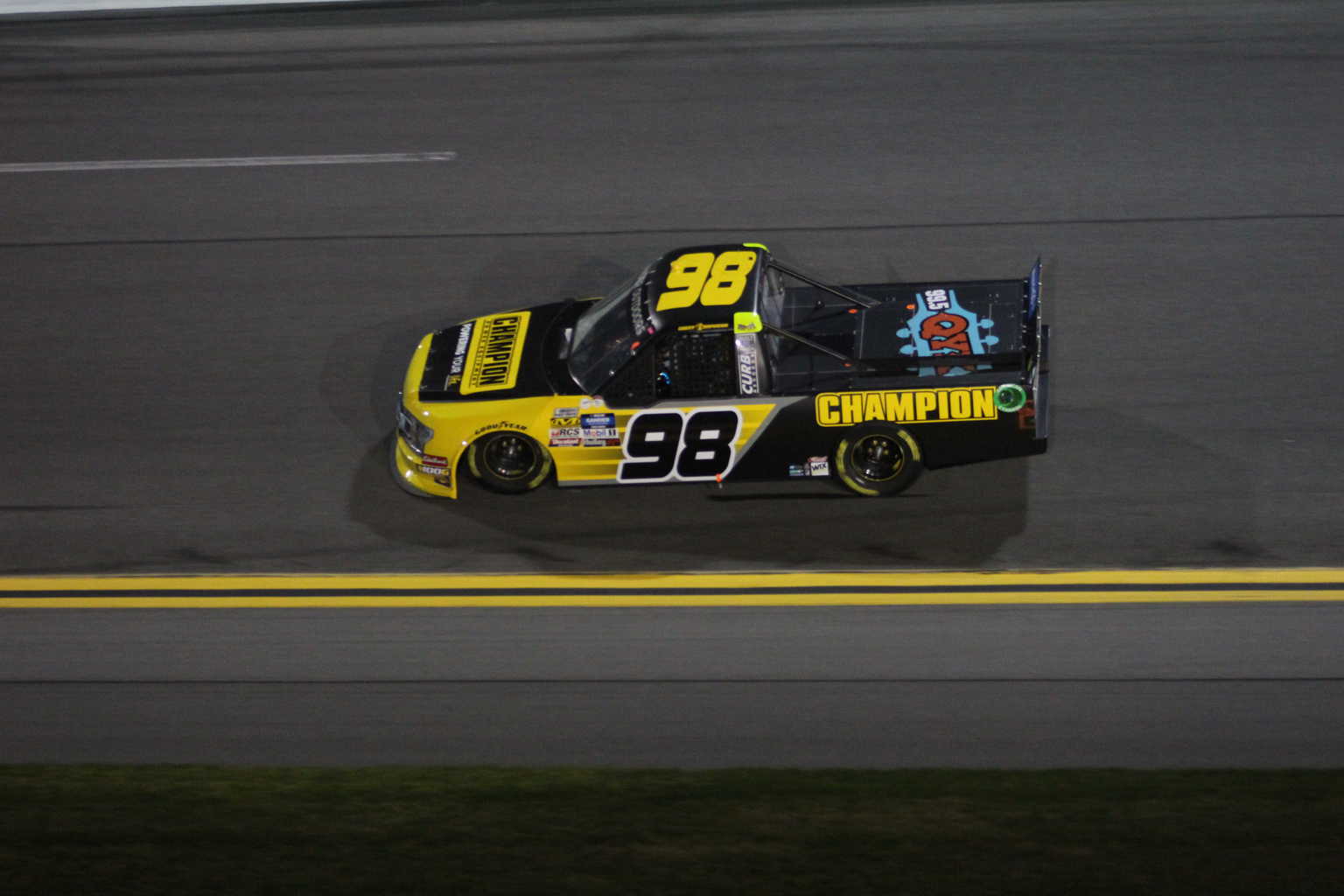 Nine points separate the top three in the championship standings

For the first time in his career, Grant Enfinger sits atop the point standings on the strength of a pair of top-five finishes. Rookie Harrison Burton is six points back, followed by Austin Hill, who trails by three markers.

Kyle Busch may have stolen the show the last two races, leading a combined 202 laps, but six other drivers have hit double digits in circuits out in front of the field.

Austin Hill leads that group at 39, all of which were led en route to his first career victory at Daytona International Speedway to open the year. That number eclipsed his prior number of 29 laps out front through the entirety of his time in the Gander Outdoors Truck Series. Next is Ben Rhodes who’s led 32 circuits, followed by Johnny Sauter and Sheldon Creed, who have 21 apiece. Stewart Friesen has spent 20 laps out in front of the field, while David Gilliland pulls up the tail end of the list with 16.

In five of the last six seasons, the eventual champion visited Victory Lane during one of the first four races of the season.

James Buescher started the trend with a win at Kansas Speedway in 2012. He went on to visit Victory Lane four times during his championship run and held the point lead for the final four races of the year. Buescher ran one more year in the Truck Series and one in the NASCAR Xfinity Series before hanging up his helmet and taking on a real estate career.

He was followed up by Matt Crafton, who is the only driver in series history to win consecutive championships. The driver of the No. 88 Ford won just a single race during his 2013 championship campaign, but 19 top 10s in 22 starts and an average finish of 7.2 was enough consistency for the veteran to score the first title for ThorSport Racing. The following year, it was Martinsville Speedway that marked Crafton’s first win of the year in his run to back-to-back titles.

Perhaps what’s even more interesting about Crafton is that in 2015 he scored six wins, but came up short in the championship to Erik Jones, the only driver in the last six years to score his first win of the season outside the fourth race. It wasn’t until the ninth race of the season, at Iowa Speedway, when Jones won his first race that year.

Meanwhile, Sauter took the win in the season-opener during his 2016 championship run. Though he won just three times during the year, 19 top 10s, eight of which came during the playoffs, helped keep him in the championship contention until he closed the season with four straight top-three finishes.

In the last two seasons, the eventual champion snagged their first wins at Atlanta Motor Speedway. Christopher Bell and Brett Moffitt won the second race of the year at Atlanta in 2017 and 2018, respectively. Bell went on to score five poles, five wins, 15 top fives and 21 top 10s in 23 races. Moffitt’s numbers weren’t quite as strong, though he did have the added distraction of an unknown sponsorship situation. He had six wins and 13 top fives through 23 races.

This statistic may not be matched this season since Hill is the only Truck Series regular with a win in the first three races. Martinsville is still yet to come and could bring another championship contender — however, Kyle Busch is scheduled to run that race.

I’m not at all in favor of handing a victory to a driver long before the race comes around, but given that he’s proven unbeatable in two starts this year, the odds are certainly in his favor. Interestingly enough, in nine starts at the paperclip, Busch didn’t score his first Truck Series win at the track until 2016, which was the last time he raced in the series there.

Three drivers are tied around the playoff bubble line

As we’ve seen in years past with the playoff bubble coming down to a point or two at times, it’s never too early to be thinking about the championship battle. Currently, three drivers sit tied for seventh, eighth and ninth with 96 points apiece. ThorSport Racing teammates Matt Crafton and Ben Rhodes would take the last two spots for the playoffs if the postseason started today, with Todd Gilliland on the outside looking in. The good news for the sophomore driver is there are plenty of races left before the playoffs begin to put himself in a position to race for the title.

That’s right… just two. Kyle Busch’s sweep of the Atlanta and Las Vegas Motor Speedway races took out any opportunities for stage winners in those events, so the only series regulars to win stages came at Daytona. Sheldon Creed took stage one, while Johnny Sauter took stage two ahead of Hill’s first career victory.

This one might surprise several of you, but the driver to accomplish this feat isn’t even declared for series points. It’s Ross Chastain, who’s run all nine of the races run in NASCAR’s top three series. Piloting the No. 45 Chevrolet for Niece Motorsports, he opened the year with a third-place run in the wreckfest that was the season-opener at Daytona. He followed it up with a sixth in Atlanta and a 10th-place run in Las Vegas last weekend.

Chastain is scheduled to share the truck with Reid Wilson this year.

Author’s Note: Prayers go out to Tanner Thorson, who ran 11 races last season and suffered a horrible accident on a California highway this week. His injuries were described as “major” but “non-life threatening,” and he’s expected to make a full recovery.