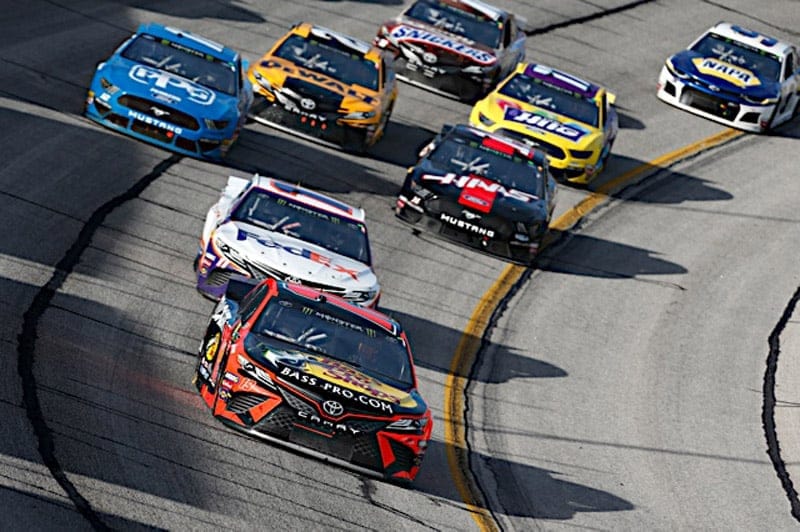 What will Toyota do with all of its talent?

Deegan is one of the more prominent rising stars in the sport, along with defending Pro Series champions Derek Kraus (West) and Tyler Ankrum (East). If you’ve been following the lower series for a while, it shouldn’t be a surprise to say that all three are Toyota Racing Development drivers.

Toyota has always put a much clearer effort into developing drivers than the other two manufacturers, who usually relied on their Monster Energy NASCAR Cup Series teams to do the hard work. But Toyota’s efforts went into overdrive after 2012 due to losing out on just one driver: Kyle Larson. Because Chevrolet’s Chip Ganassi was the only person in the sport offering Larson a ride without requiring the young driver to fork over some money, Toyota lost out on a can’t-miss prospect who came up practically in their backyard of California. As TRD general manager David Wilson told the Comeback last year, it was “a bit of a wake-up call.”

And so Toyota began to look not at who can cut a check, but who can wheel a car. A number of drivers throughout the last few years — Erik Jones, Christopher Bell, William Byron, Noah Gragson and Daniel Suarez — have spent some time in TRD’s Gander Outdoors Truck Series arm, Kyle Busch Motorsports.

But in some ways, this has been an Achilles’s heel. The manufacturer only has five full time Cup teams, and just about all of them seem pretty secure. Kyle Busch and Martin Truex Jr. aren’t going anywhere, Jones seems safe, Denny Hamlin just won the Daytona 500, and Matt DiBenedetto just joined Leavine Family Racing. And so, some young drivers have began to turn elsewhere.

This past off-season, Gragson moved on from KBM to join JR Motorsports in NASCAR Xfinity Series competition. And who can blame him for keeping his options open, considering the above and that Joe Gibbs Racing seems to have a plan for Bell (you don’t just move Jason Ratcliff down to NXS for no reason)? A couple of years ago, Byron did the same thing after almost winning a championship in the Truck Series for KBM. And before that, Bubba Wallace moved on to join Roush Fenway Racing instead of sticking with JGR.

Although TRD’s expansion has greatly helped the sport, in some ways it’s pretty confusing what’s going on. With so many great drivers come up through their system and the company dumping so much money into the industry itself, why are there still just five supported Camry’s showing up to every Cup race? It’s something that’s going to need to be seriously addressed soon by the company, or else drivers like Kraus, Ankrum, Deegan, and Todd Gilliland might end up being thorns in their sides for the next 20 years.

Is ISM Raceway a short track?

Here’s something that really grinds my gears.

There are some people- wrong people- who think that ISM Raceway in Phoenix is a short track. Here’s a brief collection of them from Twitter:

Is he lowkey saying ISM Raceway is a short track? ? *cue the debate* pic.twitter.com/hhE5TZFXTp

There was a former NASCAR exec who told me to drop the Cup needs short tracks narrative, citing NHMS, Dover and Phoenix.

So, according to Racing Reference, an online database owned by NASCAR, all paved ovals a mile or longer in length is formally a superspeedway. Yes, a superspeedway. Just like Daytona and Talladega.

But everybody else has their own ideas. Like, it’s clear that Richmond Raceway, Bristol Motor Speedway, and Martinsville Speedway are short tracks. Watkins’ Glen, the Charlotte ROVAL, and Sonoma Raceway are road courses. But other than that, it’s whatever anybody wants.

Going down this rabbit hole of track classifications has made me believe that the real reason why NASCAR’s ratings have fallen in the last few years isn’t because of race quality, star power, bad TV coverage or whatever. The real reason is because nobody can figure out what track is which. This is such an easy thing to see I can’t believe nobody has figured it out before today.

So here’s the solution, something that is going to save everybody with a bad case of OCD over this like me. Road courses are road courses. Short tracks are less than a mile. Speedways are a mile to Darlington Raceway. Mile-and-a-half racetracks are mile-and-a-half racetracks. Everything above are superspeedways. Everybody involved with the sport- media, drivers, TV, the sanctioning body- need to all come together to both adopt this and to put the word “intermediate” into the trash bin, right next to “encumbered”.

What’s next for Corey LaJoie?

One of the more pleasant surprises this season has been the emergence of Corey LaJoie in the Cup Series this season.

LaJoie, in his third season at NASCAR’s top level and his first full time season, has moved over to Go FAS Racing this season and landed a sponsor for Daytona. This sponsor, Old Spice, had an idea of how the small team could get noticed.

Just having a little fun in Daytona. pic.twitter.com/XaE7uYjPbn

LaJoie wheeled his face to a solid 18th in the biggest race of the season, and has followed up with solid top 30 finishes at Atlanta and Las Vegas. His average finish this season is two positions above what the team did in 2018. LaJoie has also been doing a lot more media work this season than he has before, being a major part of Barstool Sports’ content at the Daytona 500.

LaJoie seems to be developing well as a driver. Earlier in his career, he had the reputation of over-driving his equipment; him causing a caution in his rookie year for BK Racing became a popular Twitter meme at the time. That seems to be in his rear view mirror, and it will be interesting to see over the next couple of years if he can springboard into a stronger ride like his predecessor at GFR, DiBenedetto.

Something something rules package?

Almost immediately, seemingly while Joey Logano was doing burnouts on the frontstretch of Las Vegas Motor Speedway, a horde of journalists began to try to make heads and tails of what happened with the new rules package.

I found the race to be just that, a race. It had a decent finish, but the meat of the race was fine. The racing was fine. Aero push is a huge problem, outlined best by Busch’s interviews with media, but let’s face it, that’s been a problem for years.

It was kind of cool to see a race develop like that, without the aid of constant cautions bunching up the field. Obviously that’s not how it will be every single week, but it is a nice change of pace in some ways.

The jury won’t reach a verdict on this package for a few months, but in the meantime, I do feel like NASCAR could make some small changes. Something needs to get rid of aero push, or at least minimize its impact, in order for this package to be a success. And maybe the cars could go a little faster, so that it’s easier for drivers to blow by each other on the straights. But with the season already four weeks old, it’s not like there’s much NASCAR would be able to do at this point without looking hypocritical after last year’s debacle. But hey, it wouldn’t be the first time NASCAR would look hypocritical.

Brian France to broadcast teams: From now on, refer to ISM and NHMS as “short tracks”. Free access to my medicine cabinet if you call Dover a short track.