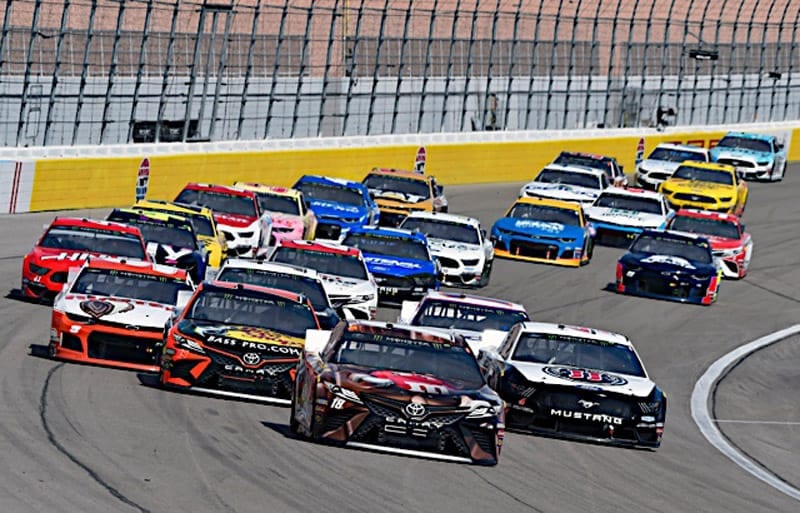 What we saw at Las Vegas Motor Speedway this past weekend in the Monster Energy NASCAR Cup Series wasn’t knock-your-socks-off-caliber racing. It didn’t make you scream at your television, you weren’t as entertained as you had ever been watching NASCAR and you probably wanted to see a little more.

That’s fine. You should want more.

But what we saw also wasn’t down-in-the-dumps racing. It didn’t make you fall asleep on your couch or change the channel after five laps of single-file racing, and you were intrigued by all the factors that went into this race.

That’s also fine. The restarts were great. The first 10-15 laps of a green-flag run were fun to watch. After that, the field got strung out single file, and it was rather difficult to pass. Somewhat typical of intermediate track racing in the past few years.

Guess what? This package not being an immediate hit is, wait for it, a good thing.

Huh? Who’s this kid trying to tell me what I saw and how I should think about my sport after watching a race that I set aside time in my schedule to watch, only to be disappointed?

Take a deep breath, do your best Aaron Rodgers impersonation and R-E-L-A-X.

The implementation of this full new rules package foe 2019 didn’t knock it out of the park. It popularly underwhelmed, and there’s many people who are to blame for it.

“You certainly saw the last stage, 100-hundred lap green-flag run with no cautions, top four within 2.5 seconds, so directionally I think better for sure, but not satisfied. We can — I’m a race fan first, and liked what I saw, but I think there’s also more to come hopefully.”

Isn’t that refreshing? A sanctioning body higher-up being transparent and honest after what many (myself included) called the biggest and most important NASCAR race in the last decade, well, fell a bit short?

“Not satisfied” being the key words here. O’Donnell himself knows this package is a work in progress. Fans do too, but in the 21st century culture of NOW, MORE, BIGGER, BETTER, HOT TAKES, a work in progress isn’t sexy. It doesn’t make headlines, put more butts in seats overnight and increase TV ratings.

NASCAR is thinking long term here. Whether or not you like this new package, get used to it. It ain’t going anywhere. Even if the first few races aren’t eerily similar to last year’s All-Star Race or the test sessions at LVMS and Auto Club Speedway,

After all, it’s been one race. Do you honestly expect NASCAR to change everything they and the race teams have been working tirelessly on all offseason long based off 267 laps at one track where there were no caution flags for the first time in 17 years?

I didn’t think so. And O’Donnell knows time will be the main factor in determining the success of this package.

“I think over time,” he said. “We’ve said from the beginning that this is going to be a season that we’re going to analyze. We’re not going to every race [to] say, was that a good race, was that not? I know fans do that, but for us directionally, are you improving upon where we wanted to be, and if you look at last year vs. this year, I would say we are.

“Was it tremendous improvement? Probably not. But again, as a fan you want to see lead changes. We saw that today, and I think if you would have looked in the past with no cautions, we would have seen someone check out all race long and we wouldn’t have seen a lead change.”

It’s OK that the race was just okay. Not every event has to blow you away. If it did, the sport would be entirely different. Not every race will be like Vegas. Some will be better, some will be worse.

I know it’s difficult in these times to have patience. I’m guilty of it too. But in this particular circumstance, it’s not a choice. It’s a necessity.

I’ll agree with most of your points. I’ll wait and see a bit longer. Up to this point it seems like nothing much different from before vs. after. Except for that debacle that was called qualifying at Vegas. That has to be fixed immediately.