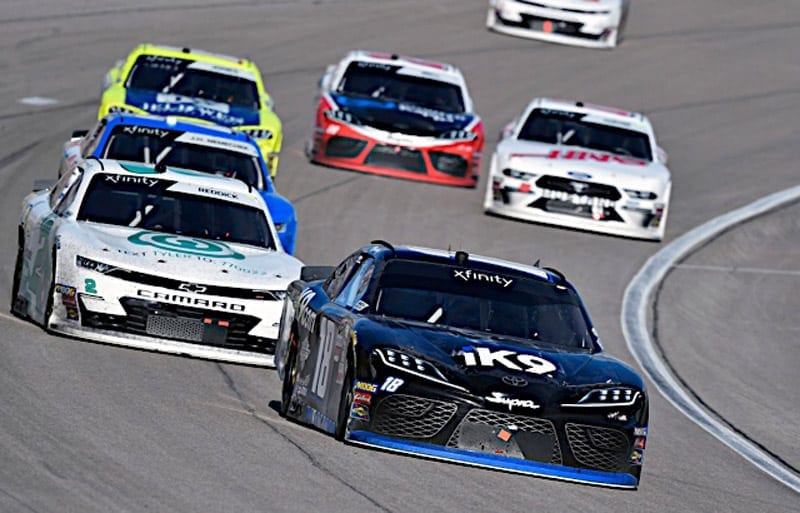 And now for some good news in NASCAR’s lower ranks: it took a really long time for a non-Xfinity Series regular to win a race in that series this year!

That’s when Kyle Busch drove his No. 18 for Joe Gibbs Racing into Victory Lane at Las Vegas Motor Speedway, earning what was his second victory of the weekend after also emerging victorious in the Gander Outdoors Truck Series race the night before.

You’re probably thinking, nah, dude, three races is still really early in the season. Everything’s the same, everything’s broken, etc., etc. And you’re not wrong! We’re not even a tenth of the way through the season and the Xfinity Series saw someone not running for the championship in Victory Lane.

But look on the bright side: for the first time since Xfinity took over the title sponsorship for the series, it took three races. The last time non-Monster Energy NASCAR Cup Series regulars won the first pair of events of the year was in 2012, back when Nationwide was sponsoring things, and even that season’s got a bit of a caveat, or an asterisk, or whatever you want to include. Point is, it’s mildly different from 2019.

That’s because the season opener in 2012 at Daytona International Speedway was won by James Buescher, his first and only Xfinity win. Cool and all, but Buescher was actually a part-time driver in the series, instead running the full Truck Series schedule that season, eventually winning the championship. He ran 20 races in the Xfinity Series that year, including the first five events.

The next three races, however, were different, with 2012 regulars Elliott Sadler and Ricky Stenhouse Jr. winning two and one races apiece. It wasn’t until race five, at Auto Club Speedway, that a Cup guy won, with Joey Logano the victor.

Since then, things have been bleaker at the start of the year. 2013 had Tony Stewart and Busch the winners of the first two events, with regular Sam Hornish Jr. the year’s first from the Xfinity camp in race three. In 2014, Regan Smith scored a win for the regulars at Daytona, but Busch followed with a victory at ISM Raceway. 2015 saw more of the same, with Ryan Reed and Kevin Harvick in those roles that time around (and Harvick winning at Atlanta Motor Speedway, which had become the year’s second race).

It very much did not get better. In 2016, a non-Cup regular didn’t win until the year’s seventh race, Bristol Motor Speedway, with Erik Jones ending the six-race domination of Chase Elliott, Busch and Austin Dillon. 2017 was a little brighter thanks to Reed’s Daytona win, but Busch followed with a victory at Atlanta. Last year, Tyler Reddick replaced Reed, but Harvick replaced Busch.

The point is that seeing Michael Annett and Christopher Bell in Victory Lane for the first two races of the Xfinity Series season this year isn’t something we should take for granted. After all, it was the best start in the series for non-Cup regulars in seven years and the best for Xfinity-specific drivers since — get this — 1995, when Chad Little won the first two races of the season. Seriously; since then, 2012 aside, every season’s first two races had featured at least one winner who was running in the Cup Series full time.

So what does this mean, besides being a statistic somewhat worthy of a pat on the back for the racers running for the Xfinity championship this year?

It may be the latest example of a continued trend upward for Xfinity regulars winning in their own series. Here’s a stat that was somewhat lost at the end of last year: 2018 was the first time more regulars of the series won than non-regulars in 16 years, dating back to 2002, when 21 of 34 races were taken by Xfinity regulars, and a 22nd, from Bodine, may count as well depending on your definition of full time (he ran full time on and off in both Xfinity and Cup that year due to various circumstances). The next year, in 2003, it was split down the middle — 17 regulars, 17 Cup drivers. Until 2018, the majority of wins came from Cup drivers, some seasons getting so bad where it was a rarity to see someone without a full-time Cup ride in Victory Lane (like 2006, when the full-time Paul Menard and part-time David Gilliland were the only non-Cuppers).

2018 was different. Last year, in 33 races, 17 were won by full-time Xfinity drivers, and an additional three events saw victors who were part time in the series (Ryan Preece, John Hunter Nemechek and Chase Briscoe).

This was due in large part to restrictions on Cup drivers in lower series. As of 2019, it’s stipulated that a driver scoring championship points in the Cup Series can only race seven Xfinity events a year, and those seven can’t fall during the four Dash 4 Cash races or during the series playoffs. New for 2019: for the owners’ championship, teams can only score playoff points and have wins count toward that championship if the driver who wins is not declared for Cup Series points.

As such, the Xfinity Series has seen less Cup drivers in recent years, though it didn’t matter as much at first because said limitations simply meant a team might cobble together a schedule with multiple Cup drivers until their race limits were reached, something that changed slightly when the no-Cup-drivers-in-playoffs rule came into effect.

There’s a chance their participation could be curtailed further with the owner’s championship rule, which is certainly said rule’s intent.

So not only are Xfinity-only drivers rising to the occasion when it counts, they’re also doing so oftentimes without much competition at all. And while Busch is going to be around in 2019, certainly, he and his ilk seem likely to be present less than ever before, if the first few races of this year are any indication. In fact, at ISM this weekend, Busch is the only Cupper entered.

Then again, it’s still Kyle Busch, so this weekend’s race — as well as the ensuing Auto Club Speedway and Texas Motor Speedway — may mess with this data a bit should no one be able to challenge him from the series regular side.

But on the whole, it’s nice that we were able to get to Las Vegas before a Cup driver had their day in the Xfinity Series, and judging by the overall stats from 2018, reestablishing an identity for the series could be more on the upswing than ever before.

What I would like to see more of (though I’m not a big fan of Cup drivers dropping into the lower series) is when the Cup drivers drop down and drive for Xfinity or Truck teams. Like for instance, last week when Austin Dillon drove for Kaulig Racing. Kaulig Racing is a small Xfinity team that fielded a second car for Austin. I’m ok with something like that. Kyle Busch wants to race in an Xfinity race, fine, go drive for RSS Racing or Clements Racing or JD Motorsports. Then we will see really what kind of driver he is. Sure, he can jump into what is basically a Cup team and win in it, and he should. But let’s see what he does in less then top notch equipment (and I am by no means putting those teams I mentioned down, they do great things with the resources they have.). SO if Kyle Busch and Kevin Harvick say they want to promote the lower series, go race for the small teams, not your Cup teams.

That wouldn’t work. Why? The best Cup teams in Xfinity can easily choose some weaker team, give them their elite equipment and then we’ll see Cup drivers running for the win and winning races in weaker cars that aren’t exactly weak, because those Cup teams use them as a front. Just look what Stewart-Haas Racing did to Fred Biagi’s #98 car – that car was always weak, but suddenly, Kevin Harvick was able to dominate and win the race at Atlanta last year. No, Harvick is not that talented to dominate and win with the weaker car, that car had the equipment from Harvick’s Cup team. So this wouldn’t fix anything.