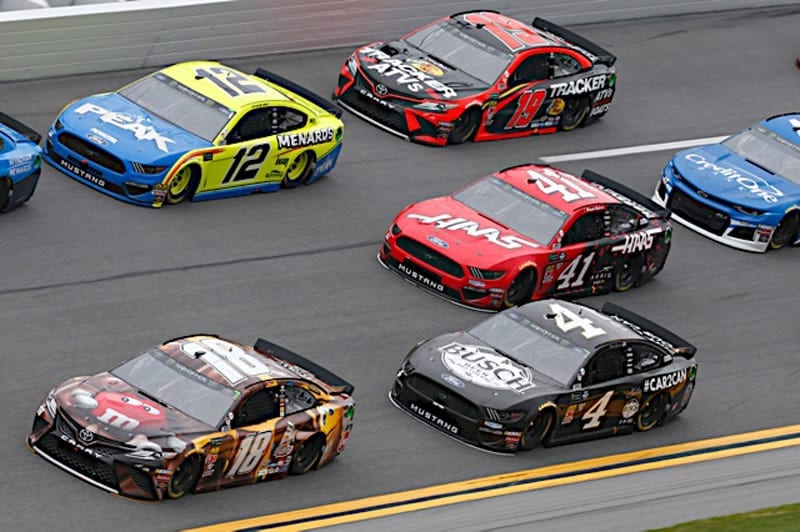 Auto racing has been around since the second automobile was produced, and there have constantly been contests between owners of different vehicles to see which one is the fastest. Whether it is in a straight line, a circle, windy roads or backward, people are always going to race each other.

As fans of auto racing, we enjoy seeing people with greater ability than ours pushing their vehicles to the limit to find out which is the absolute best on any given day. Unfortunately, around the time the third automobile was produced, one of the owners of the three autos in the world figured out that if he put some extra alcohol in his fuel, he would run faster. The end result is that we have to have sanctioning bodies and rules to keep people from trying to gain an unfair advantage.

NASCAR is one of those sanctioning bodies, and it does a pretty good job of trying to rein in the creativity of some of the brightest minds in the automotive world. Unfortunately that has resulted in a rulebook that is as thick as the New York phonebook used to be.

The rulebook has become unwieldy, and we are starting to see some nitpick-y rules as a result. With that said, we have a brand new aero package that the teams are in the early stages of dissecting. The end result is that these first few races may be barnburners or they may suck.

Whatever the case, shut up and watch. Enjoy common men doing uncommon things, as Ken Squier used to say.

There is a closet group of NASCAR fans, followers, hangers-on, general pains in the ass, who spend the vast majority of their time complaining about everything under the sun pertaining to the sport we love. You have a Daytona 500 finish where the two cars are separated by inches, but another car crosses the finish line upside down and on fire and the first thing you hear from this contingent is that the caution flag should have been thrown.

Guess what, it wasn’t, move on.

NASCAR is at a crossroads, which seems like something we’ve said every year for the last 20 years, but it has generally been true.

Luckily for those of us who are fans of the sport, real change is on the horizon. And we’re not talking about inches on spoilers or radiator pans or changing the way the air flows into the engine. NASCAR is about to go through a very real change to its car, its schedule and even the tire used to run the sport.

Fans have asked for short tracks to be added to the schedule in place of the quite similar mile-and-a-half tracks. Apparently NASCAR has listened; the schedule is reportedly about to be revamped and is supposedly going to see a significant increase in the number of short tracks. The proof will be in the pudding, but it sounds like it is coming soon.

So until the entire sport is turned on its head by the changes that are right around the corner, please just sit back and enjoy common men doing uncommon things.

I feel a lot better about things since BZF was sent to the Shady Acres facility and from a fan point of view has not been heard from since. Thus far! I wonder where his Toyota Lexus that he got busted in is at!

“Apparently” and “reportedly” are not facts. All those fans that went bitching into oblivion really help the state of racing, don’t they?. People vote with their wallets; nascar, their sponsors, television execs, and frontstretch writers are not entitled to a person’s money. They have to earn it…and for the last couple decades nascar has done a piss poor job of it. You call it bitching. I call it stating the obvious. If you think that a 22 car wreck at Daytona qualifies as entertainment…well, I have no words.

Or, rather than bitching people can find something to do with their time and money. That seems to be the course many have taken.

As far as change coming, you can bet that whatever it is it wot mean that the tracks owned by ISC/SMC are effected, so, whereare all these new short track races going to be held and when?

Maybe thats the most interesting thing to wonder about.

So NA$CAR is going to make changes? Is there any reason not to expect the same results as the last 16 years?

Man do I miss Jayski. He used to have all major news and links to those articles and now that isn’t happening. I’ve heard stuff about changes but I must have missed the news quote where NASCAR was promising us more short tracks when the revamp the schedule. Thank goodness there will be fewer 1.5 mile tracks. I also missed the news about the major change to tires. I did know that there is supposed to be a new car coming, so at least I didn’t miss that. Man, do I miss Jayski.

You know what would be cool? If someone with an existing NASCAR website would have a section just for news blurbs. A sentence or two for each item in a bullet format. Where items roll off after a week or so. I bet that could really increase traffic to a website. Or not.

Being a Jimmie Johnson fan I hesitated to respond, but as a fellow race fan and Jayski follower since the beginning….. Have you seen this site:

There are no links to article or new and I truly do miss that but it has some good info. It is run by one of the former Espn/Jayski team. For the latest news Twitter is the answer. Jayski, Pockrass, Gluck, all post updated info. And dont forget to follow Jimmie!

Thanks 48 Fan. Thank you for the link to the Scottski website. It looks like the skeleton of a new site that I hope will be developed fully over the next several months. I refuse to deal with Twitter or Facebook so I won’t be following Jimmie or anyone else. And I have tons of links to websites but there was nothing like the ease with which one could go to Jayski and have all the relevant information spoon fed to us.
Thanks again for that link. I am sure others will be interested as well.

I believe NASCAR knows what should be done but the changes would be painful for track owners, car owners, and NASCAR’s pocket book (in the short term). Also, the changes may not pay off in the long term. They must decide if they milk the cash cow until it dries up, or do they take the risks that may or may not put them on solid footing long term.

Building, maintaining, and righting organizations is hard work and it requires a will to address conflicting wants and needs. What is good for NASCAR is not necessarily what is good for the car owners, track owners, and even maybe the sponsors. I don’t think they have the will to make the necessary changes. The result will be lip service about changes but nothing significant will be done.

careful…..the people bitchin’ are the ones left.

all others have left the sport completely….

The second William France is the one who killed racing. Moving out of Darlington at Labor Day, two races at Fontanna, dropping Rockingham. I know, the events weren’t attended. But NASCAR under his guidance, stopped promoting them. Sold Rockingham to Smith knowing he wanted a second date in Texas.
They try to keep Martinsville out of the schedule. How, you may ask: Spring Race usually falls on Palm Sunday and the fall race on time-change Sunday. Also they hold them during International Home Furnishings markets limiting hotel room availability in Greensboro.
Save it: simple: drop Fontana, Kansas, fall Texas race, Kentucky, New Hampshire. Add a second race to Sears Point, run the long course in a second race at Watkins Glen, figure out a way to add Nasheville and put the spring race back at Darlington.
This is a regional sport with some national attention. Treat it that way.

You’re insane if you think that Nascar is going to leave New Hampshire and Fontana. If you wish every track have 1 race and open up some locations for new tracks on the schedule, I completely agree to you. But leaving the Boston market and fans in New England that sold out 2 dates at NHMS regularly for years would be pretty dumb. Also, as much as I hate Fontana, you don’t leave the largest market in the country either. Unless you don’t want to make money at your business. I get you would like to keep the sport in the south where it all began, but those days are long gone.

Instead of writing an article crapping on your readership and the sport’s fan base, maybe you should have led with changes are coming and gotten into more detail on that instead. You really expect this fan base to legitimately think that this version will be any better than previously failed versions? How many attempts has this been now?

And once again Nascar and its media shills spent the last 2 weeks yapping about how great this was going to be. But once again it fails miserably and we that care about the sport are just supposed to keep quiet about it. Good luck with that.

I certainly. What bull. Keep downing the fans that r left. What am idiot

A lot of people have fooled themselves into thinking the schedule is going to be revamped. The fact is it won’t. Because there is NOTHING to gain A lot of people actually seem to think the three major tours – Cup, Xfinity, Trucks – will drop some of their big track races in quality markets in favor of rinky rink little bullrings with weak crowd capacity, little sponsor appeal, and overrated competitive depth. This is utter foolishness. Regression is never good business. Iowa Speedway – a track NASCAR itself owns – has never proven it deserves a Cup race. Rockingham was reopened ten years ago and raced ARCA and the Truck Series and couldn’t sustain itself. It thus made ZERO sense for NASCAR to ever consider putting Cup back there. And the short tracks that run Cup stopped selling that well before crowds shrunk for the bigger tracks – if anything Richmond and Martinsville and maybe even Bristol should he giving up one Cup date apiece instead of bigger better tracks in better markets

NASCAR has finally addressed the draft with its duct and spoiler packages. This has increased the competitive nature of the racing. It now needs to address the footprint of the tire. It also needs to change the TV deal and get more networks involved and more TV money to the other series and tracks like Iowa so they don’t need a Cup race.