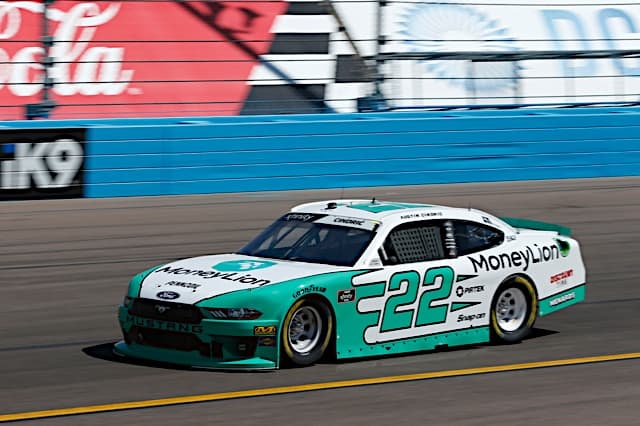 The NASCAR Xfinity Series had two practice sessions on Friday (March 8) in preparation for Saturday’s iK9 Service Dog 200 at ISM Raceway.  Kyle Busch and Austin Cindric were fastest in each of the two practices.

Busch paced the opening practice with a lap speed of 131.921 mph after running 22 laps.  He will be looking for his second consecutive win in the series after a come from behind win last weekend at Las Vegas Motor Speedway.

Atlanta winner Christopher Bell wound up second after the first session, followed by Cole Custer in third, Cindric in fourth, and John Hunter Nemechek in fifth.  Chase Briscoe ran the most laps with 49 and finished 12th in the early practice session.

Cindric topped the second of the two sessions with a lap speed of 132.129 mph.  He will be looking for his first career Xfinity win after a late race wreck last weekend took him out of a strong run.

Bell finished the later session in second once again.  Last time the series visited ISM Raceway, he was the winner and clinched his spot in the Championship 4 in 2018. He will be looking for his second win of 2019, and his second consecutive at ISM Raceway.

Nemechek was third fastest in the session. Nemechek is coming off a very strong second place finish last weekend, and will be looking to continue that momentum to capture his first win of 2019. Ryan Truex, who is making his first of four starts in the No. 8 car for JR Motorsports, was fourth. Busch wound up fifth after pacing the earlier session.

The session came to an end about three minutes early when Ronnie Bassett Jr., who is making his Xfinity Series for DGM Motorsports, appeared to blow his engine entering Turn 3. Bassett hit the wall, then dumped a bunch of oil onto the track. Bassett was ok, but the issue has put DGM Motorsports into scramble mode.

Drivers hit the track next on Saturday (March 9) at 12:40 p.m. ET for qualifying with live coverage on FOX Sports 1.