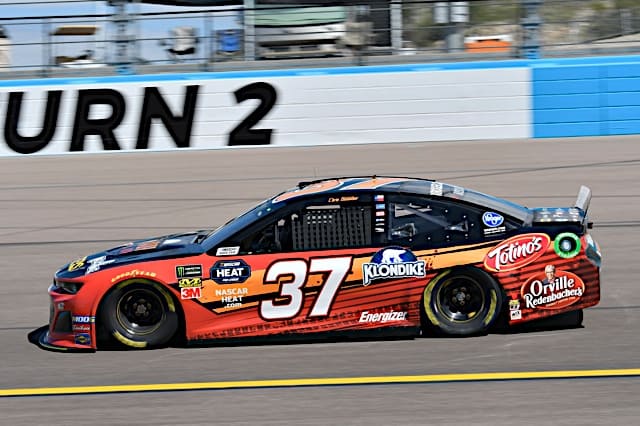 After Ryan Blaney won the pole for the TicketGuardian 500 at ISM Raceway, Chris Buescher and Joey Logano led the two Monster Energy NASCAR Cup Series practice sessions Saturday (March 9) at ISM Raceway. In the second practice, Buescher posted the fastest lap at 137.973 mph. In final practice, Logano paced the field with a lap at 137.794 mph.

Prior to the two practices, Daniel Suarez and Michael McDowell were called to the NASCAR hauler. The two drivers scuffled after a qualifying incident on Friday (March 8). Suarez will start the TicketGuardian 500 in 28th, while McDowell will start in 27th place.

Buescher turned in his fast lap on his second lap of the session, bright and early. He ultimately completed 28 laps during the session. Buescher will start the TicketGuardian 500 in 22nd, sharing Row 11 with his teammate Ryan Preece.

Kurt Busch and Paul Menard ran the most laps in this practice. Busch posted the 10th fastest time, while Menard was 20th. For the TicketGuardian 500, Kurt Busch will start 16th and Menard will start in 17th place.

All 36 drivers completed at least 21 laps in this practice session. Making his Monster Energy Cup Series debut in the No. 77 Spire Motorsports Chevrolet, Quin Houff had the slowest lap at 129.655 mph, 1.674 seconds behind Buescher, so he will seek improvement in the TicketGuardian 500.

Logano turned in the fastest lap of the session relatively early on.  He completed a total of 49 laps in the session. Driving his No. 22 Team Penske Ford, Logano laid down the fastest time ahead of his teammate Blaney. Logano also had the best 10-lap average during the session

Blaney was second quickest in both practices, and he will certainly look to extend Team Penske’s winning streak. Brad Keselowski won the Folds of Honor 500 at Atlanta Motor Speedway, and Joey Logano won the Pennzoil 400 at Las Vegas Motor Speedway.

Stewart-Haas Racing’s Kevin Harvick was third fastest, followed by Kyle Busch, who completed 58 laps in the final practice, the most laps of any driver. Aric Almirola was fifth.

35 of the 36 drivers completed a lap in final practice. Cody Ware did not complete a lap in his Jacob Companies Chevrolet. Ware will roll off 34th on Sunday.

32 drivers completed laps within one second of leader Logano, so this new rules package indicates close racing at ISM Raceway.

The session was interrupted midway through due to fluid dropped on-track from Ross Chastain‘s No. 15 Chevrolet. Chastain ended up 33rd in the session, and he will start 33rd in the race.

Coverage of Sunday’s TicketGuardian 500 begins with NASCAR RaceDay at 2 p.m. ET on FOX Sports 1. Coverage moves to FOX at 3 p.m. ET. The green flag will fly around 3:45 p.m. ET.