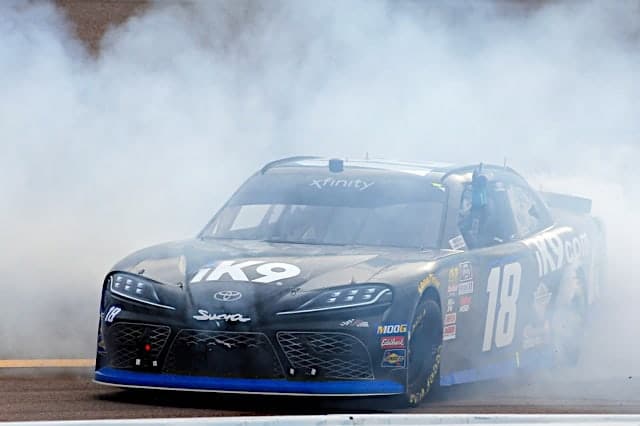 Kyle Busch led 116 of the 200 laps en route to winning the iK9 Service Dog 200 at ISM Raceway, his second consecutive victory in the Xfinity Series. Busch won by a 3.025-second margin over Ryan Truex, who earned his career-best Xfinity Series finish. Despite the seemingly easy nature of the victory, it was not a given for Busch.

“Christopher [Bell] was certainly going to give me a run for my money,” Busch stated in Victory Lane. “Can’t say enough about the guys back at Joe Gibbs Racing. They build really good Supras. Super thankful to [iK9] for being able to come out and run a few races.”

IK9 Service Dog sponsored both the race itself and the No. 18 Joe Gibbs Racing Toyota driven by Busch. It seemed only fitting the trend continues where the entitlement sponsor also sponsored the race-winning driver. In the most recent NASCAR race, Joey Logano won the Pennzoil 400 driving the No. 22 Pennzoil Team Penske Ford.

Outside of Busch, the strongest contender in the iK9 Service Dog 200 was Christopher Bell. Driving the No. 20 Joe Gibbs Racing Toyota, Bell won the pole earlier in the day. After Stage No. 1, Bell was one spot ahead of Busch, albeit they both were behind Cindric, who used pit strategy to win the stage. Bell won the second stage, again besting Busch.

Yet an unfortunate incident occurred with 71 laps to go. The engine in Stephen Leicht‘s No. 01 Chevrolet blew up entering Turn 3 and leaked fluids onto the track. Leicht, who was laps down at the time, was right in front of frontrunners Bell and Justin Allgaier. Because of the smoke from the blown engine, TV cameras couldn’t really capture the incident, but Bell and Allgaier both drove onto the leaked oil and slid into the wall. Take a look.

Bell backed his Rheem Toyota into the wall, ending his iK9 Service Dog 200 right then and there. Bell finished 30th, not an indicative result from his race, which included him leading 68 laps.

As for Allgaier, although he made contact with the wall, his JR Motorsports pit crew patched his No. 7 Chevrolet back together so that he could continue. He finished the race in 14th-place, one lap down.

Without Allgaier and Bell as contenders, Busch made the rest of the iK9 Service Dog 200 look easy. After starting third, Busch finished third and second in the first two stages respectively. He largely dominated the race, as only 13 drivers finished on the lead lap. For drivers such as Brandon Brown, Gray Gaulding, and Ross Chastain, their finishing positions don’t properly reflect the speed in their respective cars.

Regardless of whether ISM Raceway is classified as a short track or not, the iK9 Service Dog 200 featured a bevy of racing. 27 of the 37 starters finished the race, and only two drivers’ races ended prematurely due to an accident. In addition to Bell’s wreck, Bayley Currey brought out the first caution flag of the race. Currey smacked the wall after his No. 17 Chevrolet suffered a blown oil line.

Unfortunately a blown oil line and oil on the tire sent us into the wall and will end our day. I hate it for our team, I feel like we could have done pretty decent if we could have run a little longer and tuned on it. pic.twitter.com/WlLo42RgiA

Reddick earned the most points in the race, and he leaves ISM Raceway as the Xfinity Series points leader with a four-point lead over Bell.

Xfinity Series teams will be back in action on March 16 in the Production Alliance Group 300 at Auto Club Speedway. Coverage is scheduled to begin at 4:30 p.m. ET on FOX Sports 1.

Another ho-hum snooze fest courtesy of the Scrub beating up on the high school kids. Just runnin’ the score up so DW and the other fanbois can bleat about the magic 200.

He seems to be ramping up his carnival rides so he can get the numbers everybody is talk about sooner than later, imo.