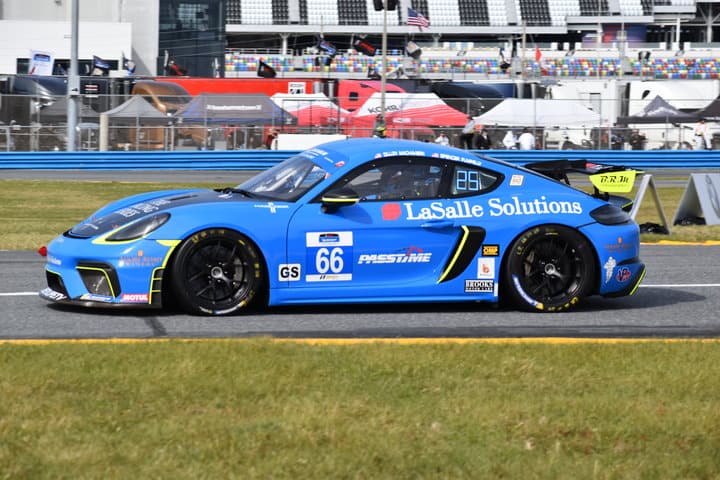 On the Streets of St. Petersburg this weekend, The Racers Group’s Spencer Pumpelly has been the man to beat so far this weekend in Pirelli GT4 America Sprint on-track sessions.  Qualifying on Saturday morning (March 9) was no different.  The veteran racer claimed the pole in his Porsche (pictured above during IMSA Michelin Pilot Challenge practice at Daytona) for Race No. 1 of the weekend with a lap at 83.335 mph.  The lap is a new track record, beating a lap from Gabriele Piana last year.

Pumpelly’s lap was nearly three-tenths of a second faster than PF Racing’s Jade Buford in the fastest of the Ford Mustang GT4s.  Gar Robinson will start third in his Chevrolet Camaro GT4.R, followed by the Panoz of Ian James.  Shane Lewis will start fifth in the second Robinson Racing Chevrolet.  That effort came despite having a lap taken away due to a violation of track limits.

In the Am division, Andretti Autosport’s Jarret Andretti was fastest with a lap at 81.951 mph, good enough for eighth overall in his McLaren 570S GT4.  For Andretti, Saturday will be his first solo race in GT4 equipment.

Andretti’s lap was less than one-eighth of a second quicker than the second Team Panoz Racing entry of Dr. Preston Calvert.  Park Place Motorsports’ Alan Brynjolfsson, co-winner of Pirelli GT4 American SprintX Race No. 2 from Circuit of the Americas last year, will start third in Am in his Porsche.  Flying Lizard Motorsports’ Michael Dinan was fourth, followed by the BMW of Precision Driving Tech’s Marko Radisic.

Race No. 1 is scheduled to go green at 4:05 p.m. Saturday afternoon.  Live coverage of the event will start at 4 p.m. on World-Challenge.com and the GT World YouTube channel.  The race will be geoblock-free for the entire planet.