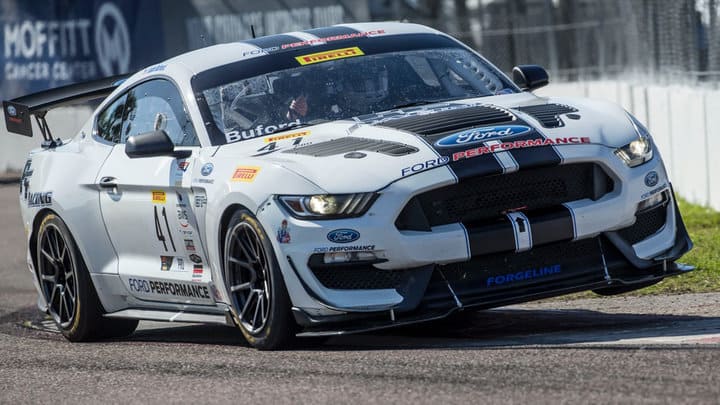 PF Racing’s Jade Buford showed Saturday that he had the fastest GT4 car in St. Petersburg, but couldn’t show it.  Sunday, he took his superior pace and ran away from the field to take victory in Race No. 2 Sunday (March 10) in St. Petersburg, Fla.

Buford, who finished 15th in Race No. 1 on Saturday, had the fastest lap time in the race.  That gave him the pole for the race.  When the green flag flew, Buford effectively ran off and hid from the competition.  Within a matter of a couple of laps, Buford put five seconds on a smaller pack of contenders including Saturday winner Ian James, The Racers Group’s Spencer Pumpelly and Robinson Racing’s Gar Robinson.

James ran second early, but fell back into the clutches of Pumpelly.  A fierce battle erupted that did nothing but hold the group up and let Buford get away even more.  Eventually, an issue developed on James’ Panoz Avezzano GT4, allowing Pumpelly, Robinson and Shane Lewis past.

Pumpelly ran in second until his Porsche began to fade.  That allowed Robinson to move in on him.  Robinson’s first attempt to pass in Turn 1 was successful, but not without rooting Pumpelly out of the way.  SRO America officials forced Robinson to give the place back.  A couple of laps later, Robinson was able to get the spot cleanly.

Buford actually backed off in the final couple of laps of the race.  Robinson finished second, 10.444 seconds behind, but the advantage was as high as 18 seconds.  Lewis got Pumpelly on the final lap for third, while James ended up 30 seconds back in fifth.

The Am class was a much closer battle throughout.  Blackdog Speed Shop’s Tony Gaples had the class pole, but Andretti Autosport’s Jarret Andretti snagged the advantage early on and opened up a gap.

Halfway through the race, Andretti came back to the pack, creating a five-way battle for the class lead.  Park Place Motorsports’ Alan Brynjolfsson tried to go to the inside in Turn 1 and ended up going in too hot and going wide.  That allowed Dr. Preston Calvert to move up to second.  A later move saw Brynjolfsson spin out, but continue.

Gaples was still in the hunt in his McLaren, but spun in a separate incident late in the race after contact from Brynjolfsson.  SRO America officials determined that Brynjolfsson was responsible for the incident and assessed him a 30-second post-race penalty.  The penalty dropped Brynjolfsson from fourth to sixth in class.

Calvert was able to get past Andretti entering Turn 1 on the final lap to take the class lead.  From there, Calvert held off the BMW of Precision Driving Tech’s Marko Radisic to take the class win in sixth overall.

Radisic was less than a second back at the finish.  Andretti was third, but picked up a post-race reprimand from the stewards for having contact with Calvert under a local yellow.  Mark Klenin was fourth in his McLaren, while BGB Motorsports’ Thomas Collingwood was fifth.

Pirelli GT4 America Sprint teams are now off for the next month.  They will be back in action for a single race in Long Beach, Calif. April 14 on the undercard of the Acura Grand Prix of Long Beach.  Frontstretch will be there to bring you all the action.