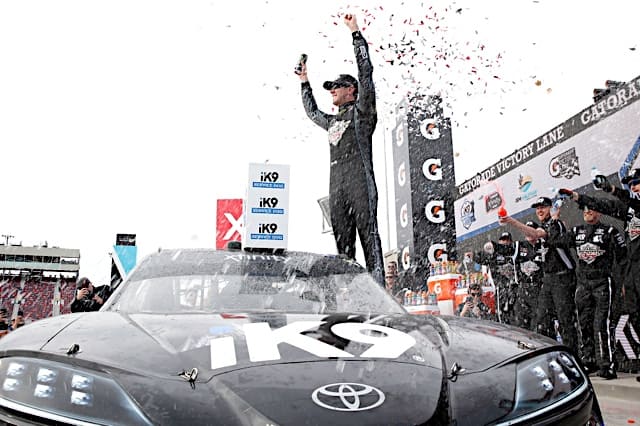 This weekend was all about Kyle Busch. Last weekend was reigning Cup champion Joey Logano’s time to shine. Nine-time ISM Raceway winner Kevin Harvick ran ninth at the track; his worst finish there in six years, that’s how good he’s been. And Martin Truex Jr.? He’s run second in two of the last three MENCS races.

Looks like last year’s Championship 4 won’t be easily knocked off its perch. We’ll start with Busch, whose weekend sweep left him in the series point lead. He’s just one off that mythical 200 mark set by King Richard Petty for wins in NASCAR’s top three series. That climb is coming faster than expected; Busch already has five wins combined in eight starts. It’s even conceivable that number could be higher; pit road speeding, then a little extra push in February’s Daytona 500, could make it seven-for-eight.

All four of these drivers are inside the top five in points; only Denny Hamlin (fourth) slots in between them. The new handling package, despite supposedly subtracting driver skill, has left last year’s best teams still in perfect position for success.

Hamlin has run strong to start 2019, armed with a new crew chief and some confidence. Ryan Blaney gave Busch a run for his money at ISM Raceway before fading late. Brad Keselowski was the closest to toppling the quartet last season and will remain a contender with Team Penske.

But the drivers to beat one month into 2019 remain the same group who rose above the fray last season. If NASCAR’s experiencing a changing of the guard, someone better start the rebellion. – Tom Bowles

If Busch enters an Xfinity race at ISM, you might as well hand the West Coast native the checkered flag, as he’s been dominant in Phoenix. That excellence continued in Saturday’s iK9 Service Dog 200.

Busch had to start from third, though he quickly grabbed the lead from Christopher Bell and Tyler Reddick. However, a caution late in the stage saw a split strategy for the competition, and Austin Cindric earned the playoff point by staying out.

When the second stage began, it cycled Bell to the lead, and he and Busch dueled for the duration of the stage. Bell notched his third stage victory of the year.

However, Busch got out front early in the final stage, with Bell and Justin Allgaier in close pursuit. But on lap 130, Stephen Leicht blew an engine in front of the Nos. 20 and 7. Bell backed it into the fence after sliding in oil, while Allgaier smacked the outside wall. Bell went to the garage and finished 30th.

With his closest competition having damage, Busch cruised to the victory, his second in as many weeks. It’s also his 11th win at ISM Raceway in the Xfinity Series, but his 116 laps led on Saturday are the least he’s led in a win at the track.

Ryan Truex, Reddick, Cole Custer and Cindric rounded out the top five. Michael Annett picked up his third top-10 finish of the season, equaling his total from 2018, while Ryan Sieg already has more in four races this season (three) than all of last year (two). – Dustin Albino

Josef Newgarden made a statement on Sunday, winning the opening round of the 2019 NTT IndyCar Series at the Streets of St. Petersburg and claiming an early spot in the fight for the series title.

Wrestling away control of the race, which had largely been in the hands of rookie Felix Rosenqvist and teammate Will Power, by laying down the fastest lap of the afternoon, Newgarden renewed his role as a championship contender following his up-and-down 2018 season. The American led 60 laps on his way to Victory Lane and an early lead in the season-long points standings, one I expect him to hold on to.

But he wasn’t the only driver who set the tone for the rest of the season this weekend.

Rosenqvist, in his first race buckled into an IndyCar, spent the entire day solidly in the top five, leading 31 laps on his way to a fourth-place finish. Much like Robert Wickens in 2018, the Swedish driver positioned himself as a driver to watch from here on out.

While his overall race wasn’t as impressive as Wickens’ pole and near-race winning effort last year, his locked-up dive under leader (and 35-time race winner) Power was, and it shows that the lofty expectations weren’t unsubstantiated.

A driver that has won in nearly every type of car into which he’s strapped, Rosenqvist is already a threat to win a race or two, and it wouldn’t be shocking if he’s in the mix when the series takes to WeatherTech Raceway Laguna Seca this fall. – AJ Hecht

ARCA: Venturini Motorsports Shows Them How It’s Done in Pensacola

Venturini Motorsports has dominated so far this season when Harrison Burton kicked it off at Daytona, and Michael Self continued it at Five Flags Speedway Saturday night, March 9. The whole Venturini organization put its two cents worth into the event Saturday, with Self picking up the victory and leading first practice. Meanwhile, Chandler Smith earned his fifth career pole and Chrisitan Eckes left with the points lead.

Without a doubt, Billy Venturini has himself a stout lineup of drivers, and if the organization has its way, it’ll have a one-two finish in the points at the end of the season with Self and Eckes. The Venturini organization has been the Single-A version of a development team for Toyota Racing Development, and that doesn’t show any signs of changing anytime soon.

Eckes is slated to make his return to the NASCAR Gander Outdoors Truck Series with Kyle Busch Motorsports at Martinsville Speedway in two weeks, with Smith driving for the team later this year, and there seems little doubt the organization will overlook Self in the near future.

After falling short of earning the championship in 2018, Venturini is back with a vengeance. As Kevin Harvick stated, “That’s how you rebound and just show them how it is right there.” – Christian Koelle

On the undercard of the Firestone Grand Prix of St. Petersburg, TC America’s TCR class held rounds three and four of their own championship.  With the opening rounds being held just last weekend, the car count was rather depressed.  The races turned into a FCP Euro benefit.

Race one on Saturday saw Michael Hurczyn lead from the pole with teammate Nate Vincent in close tow.  On lap 13, Vincent got a bit physical and executed a bump-and-run on Hurczyn to take the lead.  That’s considered gauche in TC America competition, so Vincent was penalized.  Hurczyn retook the lead when Vincent served his penalty and then held on for the win.

In the second race, Vincent started on pole and dominated the race.  He was looking to go flag-to-flag without issue, but James Walker crashed his Alfa Romeo hard exiting Turn 9 with 13 minutes to go to bring out the yellow.  Vincent was able to hold on during a green-white-checkered to give FCP Euro the weekend sweep.