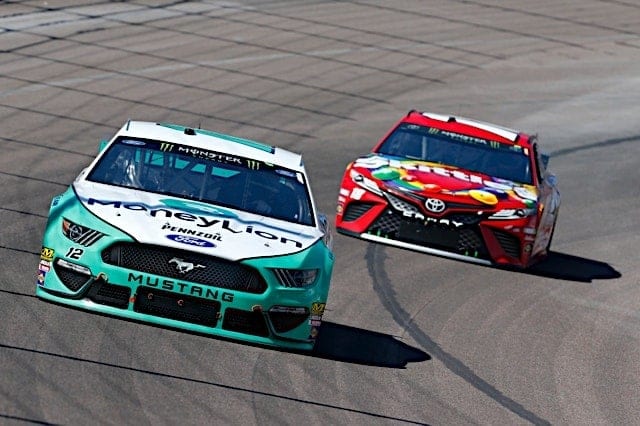 Kyle Busch had the best car in the field when he really needed it and was finally able to capitalize on that in 2019, winning his first Monster Energy NASCAR Cup Series race of the season after running down Ryan Blaney in the final laps to take over the lead. Busch had one more advantage over Blaney: a full fuel tank. Though it was close for everyone, Busch didn’t have to save fuel as much late as Blaney did, so once he got by, it was clear sailing to the win.  Busch’s next national touring win will be his 200th career NASCAR win. It’s safe to say he’s made having those great cars work more often than not.

Jimmie Johnson looked the most like his old self as he has in weeks, racing inside the top 10 for most of the day and leading his first laps for 2019. It was obvious that Johnson was still searching for speed from his Chevrolet; and he’s not the only one, as the entire Chevy camp is in that boat right next to him. But he was able to be aggressive on the track and seemed to be clicking with his team all day. It wasn’t a win, but it was a glimmer of hope for Johnson that he hasn’t taken his last checkered flag just yet.

The fourth different racecar in the first four races was significantly different than what we’ve seen recently. This week’s version featured considerably more horsepower than Atlanta Motor Speedway or Las Vegas Motor Speedway, but with a bigger spoiler and more downforce than the similar horsepower cars from last season.

What that meant was that the field got more spread out on long runs, but drivers could race for position side-by-side when they caught each other. There were comers and goers throughout the race, multiple racing lines and pit strategies and an entertaining battle for the win.

Like the races at Atlanta and Las Vegas, it wasn’t the best race ever, but it wasn’t the worst.  What 2019 could go down as is not the year of the greatest racing ever, but as the year that started some real change in the sport, including the cars.  NASCAR took a big swing at it, and the sanctioning body has indicated it’s willing to take more. There are miles to go before we sleep, but it looks like things are getting aimed in the right direction a little more each year. If nothing else, fans should be looking forward to seeing what’s next.

All-time ISM Raceway win leader and defending spring race winner Kevin Harvick tangled with Johnson late while trying to make things four-wide and came to pit road with right front damage. Most of the leaders stayed on track, relegating Harvick to 20th for the restart. He made his way back to the top 10, finishing ninth after a fierce battle with Joey Logano. But a top 10 with zero laps led certainly isn’t the finish expected of Harvick, who had three wins by this time a year ago.

Speaking of Logano, last week’s winner had a run that could easily be described as solid or consistent but not spectacular. Logano started 12th, finished 10th and didn’t lead a lap. For Logano, that’s fine since he was able to make his title run because he was so consistent last year. He doesn’t need to win right now, but he does need to run well enough at the tracks he’ll see in the playoffs that his team will have confidence it can post a top finish in the fall. Logano showed he’ll be in the hunt, but that was about it for this week.

Polesitter Ryan Blaney tried to follow up his teammates’ wins in the last two races, but he had two things against him: Busch and a sip of gasoline. Blaney was able to hold off Busch until inside 20 laps to go, but once Busch caught him, he couldn’t afford to burn too much fuel trying to get the lead back. Blaney ran out of fuel coming to the checkers but was able to coast to a third-place finish.

Sunday definitely featured some hard racing throughout the field.  In part that was because the race featured more restarts than we’ve seen since Daytona International Speedway, with nine yellow flags slowing the action.  That’s quite a change from last week when the stage cautions were the only ones the field saw.

If three races can be a trend, though, long green-flag runs are becoming one.  This week’s race stretched fuel mileage to the max, with the final caution coming with just over 70 laps to go.  That’s not a bad thing; mileage is as much part of the game as anything else when the races are as long as Cup Series events.

But did cautions make for a better race? While they certainly did for some drivers who could make strategy plays, not really. The 1.2-second margin of victory was the widest gap of 2019. That’s actually fairly impressive; by this point last year, two races had already seen the winner cross the line more than two seconds ahead of the runner-up. NASCAR has let the races play out naturally this year, and as a result, cautions haven’t been a big topic of conversation. And they shouldn’t be.

Why… should you be paying attention?

If variety is indeed the spice of life, then 2019 so far isn’t quite white bread (sliced or otherwise), but it’s not five-alarm. One-alarm? Maybe, because we have seen four different winners in four races: Denny Hamlin, Brad Keselowski, Logano and Busch.  But they represent just two organizations – Joe Gibbs Racing and Team Penske – and two manufacturers (Toyota and Ford). The manufacturer angle gets a bit of a pass as there are only three of them, but there are teams that should be capable of winning and need to turn up the wick.

Winning too much is a myth in the context of the sport as a whole, but to fans, unless it’s their driver, it gets old seeing them fall short.  From that standpoint, it’s important to have as many different winners, or at least contenders, as possible. We have seen some different faces in the top 10 and top 15 this year, which is great for all involved, but a little variety at the top is still needed at this point.

How… come Chip Ganassi Racing is under the radar so far?

The simple answer is because neither of the organization’s cars has won a race, but this is a team people should be watching closely.  For one thing, it’s quietly made itself into the top Chevrolet team in the garage, outperforming both Hendrick Motorsports and Richard Childress Racing regularly.

Kyle Larson is currently fourth in points with a pair of top-10 runs and a 9.2 average finish. He hasn’t finished worse than 12th through four races and is one of three drivers to complete every lap to date. Busch and Hamlin are the only others to run all 1,111 laps.

Kurt Busch’s 25th-place finish in Daytona relegates him to 10th in points, but he has been quietly impressive since, finishing third, fifth and seventh, good for a 10th-place average despite his Daytona misfortune. Only five other drivers have average finishes of 10th or better, including Larson’s 9.2.

And Kurt Busch could prove to be the difference for the CGR organization as a whole. Jamie McMurray won some of the biggest races in the sport, but he was always a streaky driver, lacking the kind of consistent presence up front that Busch has made for himself so far. Having both cars running closer together in the race only gives the team more to build on. While you can’t punch its tickets just yet, the team is positioning itself to put two different drivers in Victory Lane for the first time since 2002. Is the team in its best position ever? It’s starting to look that way.

I must admit that so far I don’t see any real difference between the racing of the past few years and what has happened so far this year. I would guess that until Nascar decides to change something with the side skirts and splitters, only restarts and green flag pit stops will contribute much to keep attention on the track.

One of my takeaways is I’m amazed that Na$car could actually have someone perform the national anthem worse that that screeching singer from years ago. 17 yrs old and s winner of the voice but does not know the words to the national anthem.