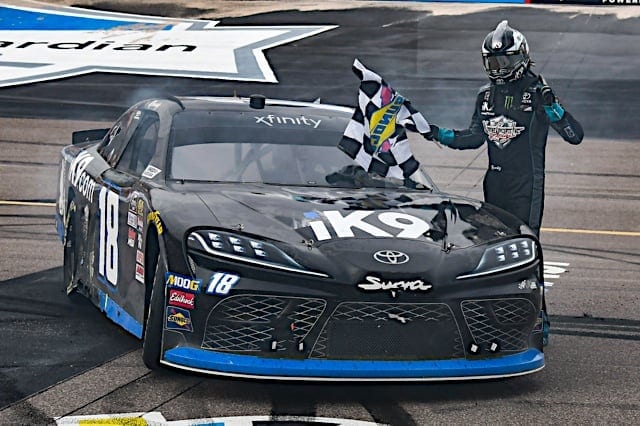 ISM Raceway brought additional power and higher speeds (as compared to normal). It also brought yet another Kyle Busch sweep.  It was noted on FOX’s broadcast Sunday that this is the 12th time that Busch has swept a weekend (two of those being three-race sweeps).  It seems like more than that at times.

The original plan was to cover both ISM Raceway races, plus the NTT IndyCar Series season opener from St. Petersburg.  From what I can tell, there were some issues there on the technical side and with how to watch the broadcast in general.  I’m going to cover that later this week in the Critic’s Annex.

Sunday afternoon brought viewers a fairly interesting 500-kilometer race at ISM Raceway.  Going into the race, there was plenty of cheers for the new setup since the old booth (referred to by Mike Joy as a bunker) is now scrap metal, but how was FOX’s first Cup race with the new setup?

Aside from the race itself, the biggest story coming out of Phoenix is the qualifying schmozzle between Daniel Suarez and Michael McDowell.  Once the Penn State-Illinois college basketball game finally ended, NASCAR RaceDay started off with fight discussion.  I found the whole thing with that fight to be ridiculous.  I’m just happy that it’s apparently over and they’re not going to go at it again.  Compared to normal discussion of these incidents, that was actually a change.  Usually, you hear things like “_______ and ________ are around each other, will heck go down again?”  I’m sure you can come up with examples of that on your own.

If there’s one debate these days that really annoys, it’s this whole Kyle Busch Chasing 200 and what it means thing.  It’s looney tunes.  I feel like most fans don’t care about it, but FOX Sports spent time Sunday having “The Great Debate” about it.  I almost hope Busch does it in Fontana so we don’t have to hear about it anymore.

Also, Michael Waltrip did not make the trip to Phoenix.  Instead, he spent the day Sunday in the Virtual Studio back in Charlotte.  Admittedly, it was a different experience not having him there.  Problem is, that’s all he does for Cup broadcasts these days since there’s no Hollywood Hotel (and Chris Myers is busy covering pugilism on a regular basis).  In Charlotte, Michael will have the opportunity to contribute more to the broadcasts, but he won’t really be able to be Quirky Mikey.  He’ll be at selected Cup races for the rest of FOX’s season.

Admittedly, the first thing that came to mind when I thought about ISM Raceway with these new rules is that tires were going to be quite an issue.  Goodyear issued a stricter than normal edict to the teams about tire pressure since downforce has substantially increased as compared to last year.  Eventually, Darrell Waltrip didn’t get the memo.

During the sixth caution, Darrell noted that he was surprised at the tire issues that were being seen up to that point in the race.  Yes, the tire was harder last weekend than in the past, but the additional downforce putting additional pressure on the tires was to be expected.  Heck, they had failures last year with the old package.  If anything, there were fewer failures than I expected.

That said, Brad Keselowski had one go, as did Erik Jones, both apparently due to mechanical issues.  Alex Bowman lost at least one tire as well.  It was in fact, a thing.

The on-track product with the 2019 rules was not really dissimilar to 2018.  The added downforce did take some of the pressure off of the brakes.  As a result, there were no bead failures (that I can think of) during the race.  I feared that aero push and/or aero loose would make it harder to pass than normal.  That didn’t really appear to be the case.  In other words, I was happy that Chase Elliott jumping the start didn’t spell curtains for his race.  Same for Aric Almirola and his early pit penalty.

Overall on-track racing appeared to be decent, but there was likely far more decent action than viewers got to see Sunday.  It happens.  There’s only so much that they can catch clearly on their cameras, especially since the number of cameras at the track has decreased over the past 10 years.

Post-race coverage was relatively short since the broadcast ran up against the end of FOX’s timeslot.  There were a couple of post-race interviews (including two with Busch) and a check of the points before FOX left the air.

Overall, Sunday’s broadcast was not horrible.  I still would have liked to see more inclusivity in the coverage.  Yes, Busch got a lot of coverage, but he always does.  With the tire failures that we saw on Sunday, I would have liked to get a better idea of just what the tire wear looked like for a “normal” tire during the race.  I’m not really sure what that would be.  Maybe it didn’t look all that impressive.

During NASCAR RaceDay – Xfinity Edition, Regan Smith had a one-on-one interview with Brandon Brown, a driver embarking on his first full year in the Xfinity Series with his family team (Brandonbilt Motorsports).  Since a lot of race fans might not know much about him, this piece focused on his rise through the ranks and his work in marketing and communications for the team.  Brandonbilt Motorsports is not a very big team, but they do well with what they have.

This piece was a nice introduction to a relatively new driver to the series that has done very well so far this season.  Brown is a very busy driver with all the hats that he has to wear, but you’re likely to see more and more of him as the season continues on.  As of this writing, Brown is currently 14th in points after finishing 15th on Saturday.

Of note, Brown doesn’t do all of his marketing work by himself.  Another chap by the name of Collin Fern also works on the team’s marketing.  If you checked out Frontstretch last weekend, then you probably saw that name on our FanDuel Daily Fantasy article.  Yes, it’s the same guy.

For Saturday’s race, Erik Jones served as the guest analyst alongside Adam Alexander and Kevin Harvick.  I honestly didn’t know what to expect from Jones.  Most of his experience on broadcasts are as a pit reporter during the Drivers Only broadcasts.  Here, Jones seemed to do a decent job, but he seemed to be a little tentative in his commentary.  If Michael Waltrip were in the booth, that wouldn’t necessarily surprise me.  I’ve written about how Michael unintentionally sapped Danica Patrick’s confidence when she was a guest analyst a couple of years ago.

With Harvick in place, he’s not going to completely dominate a broadcast to feed his ego (that might be more of a Sunday afternoon in the race car thing for him).  He’s more than willing to be a team player in this scenario.  Harvick likely can give Jones some pointers since I have no doubt that he goes back and studies his performances.  With more reps, Jones should become a bit more comfortable as a broadcaster.

One of the stranger things that came out of Saturday’s broadcast was the fact that a number of fans dissed Jones’ hair on Twitter.  Seriously, I couldn’t care less about his hair, but Jones did comment about it afterward.

Racing-wise, the action Saturday was pretty decent for the first two-thirds of the race.  Pretty much right until Stephen Leicht’s engine went kablammo.  That mess eliminated one contender (Christopher Bell) and took another out of the hunt (Justin Allgaier).  From that point on, it was a cakewalk.  The final 65 laps or so got extremely spread out and essentially nothing happened.  Perhaps it would have seemed different had I been at the race in Arizona Saturday, but there didn’t seem to be much going on late in the race.

Speaking of the wreck, Harvick and Jones made note of the fact that minimal oil dry was laid down where Leicht’s car blasted smoke out.  This put some holes in the theory that there was oil on the track.  Bell stated that he thought that there was oil, then he got into the smoke and “lost his bearings.”

Post-race coverage was somewhat brief.  Viewers were able to get a couple of driver interviews before FOX Sports 1 left Phoenix.

Overall, this was not necessarily the most exciting race on early.  Yes, Busch won again (No. 94 of his Xfinity career), but that’s not the reason it wasn’t all that exciting.  There was some decent action on the broadcast, but not as much as there should have been.

Jones has done well as a pit reporter in the past, but he appears to be a work in the progress in the booth.  He just needs reps.  With more experience, he should show continued improvement.

That’s all for this week.  Next weekend is a very busy weekend in the world of racing.  The Monster Energy NASCAR Cup and Xfinity Series will conclude the West Coast Swing with a trip to Auto Club Speedway in the Inland Empire of Southern California.  Meanwhile, Sebring International Raceway is hosting not just the IMSA WeatherTech SportsCar Championship, but the FIA World Endurance Championship as well.  Also, Formula 1 starts up in Melbourne.  Pretty much, this is wall-to-wall action starting Wednesday afternoon and going all weekend.  TV Listings are in the Television tab at the top of the page.

We will have critiques of both the Cup and Xfinity races from Auto Club Speedway in next week’s edition of Couch Potato Tuesday here at Frontstretch.  As noted above, we’ll cover the Firestone Grand Prix of St. Petersburg in the Critic’s Annex Thursday.

As always, if you choose to contact a network by email, do so in a courteous manner. Network representatives are far more likely to respond to emails that ask questions politely rather than emails full of rants and vitriol.  Also, don’t cuss out Mike Joy on Twitter!  That is really gauche!