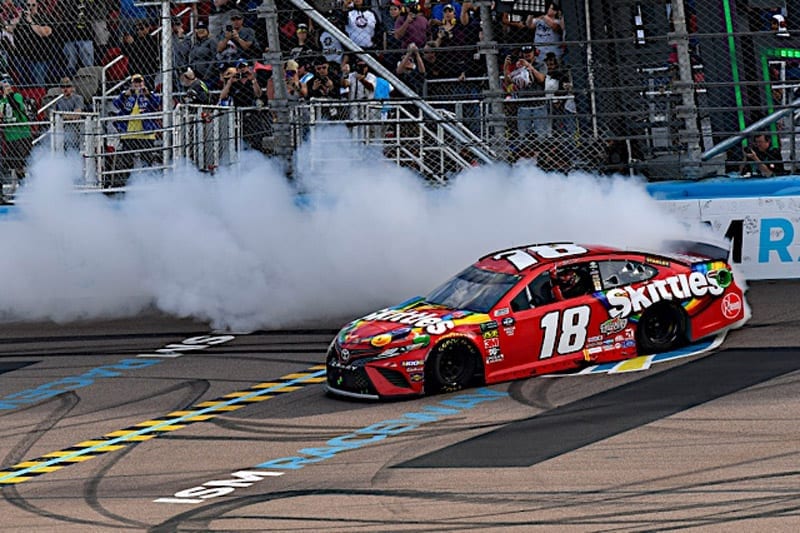 Kyle Busch has asserted himself as the prominent headline of NASCAR over the last several weeks as his quest to reach 200 victories across all three of NASCAR’s national series draws ever closer. After his romping victory in the Ticket Guardian 500, will the winning tradition continue throughout the season?

Despite phenomenal outings at Atlanta and Las Vegas, Brad Keselowski was involved in two incidences at ISM Raceway. With a win already in the bank and a playoff spot locked up, will Keselowski rebound at Auto Club Speedway, or will he take a more conservative approach?

Although he won the Daytona 500, Denny Hamlin has had a quiet but consistent season. Are more wins in store for Hamlin in the near future, or will the Virginian continue to click off solid, consistent finishes?

Ryan Blaney‘s up and down season continues, but a strong showing at ISM Raceway certainly impressed. Can Blaney finally figure out the key to consistency?

Questions still circulate as the NASCAR circus moves into the final leg of the West Coast swing. So far on the West Coast, some drivers have exceeded expectations, while others failed to live up to them. Our Frontstretch panel of experts certainly had something to say about it in our Phoenix edition of power rankings.

“We might have to call the Xfinity and Gander Outdoor Truck series something more like “The Busch Series.” -Rob Tiongson, The Podium Finish

“Are you not entertained?” -Michael Finley, Frontstretch

For the first time this season, Logano did not lead a single lap in the Cup race. Despite his inability to get to the front, the defending champion raced in the back half of the top 10 throughout the event. The series heads to Auto Club Speedway this week, a track which Logano’s team owner Roger Penske owned and constructed. We will see if Logano can harness the Penske magic.

10th-place finish today at @ISMRaceway. We added some stage points and we’ll look to grab another “W” next week. #TeamJL pic.twitter.com/iG4iD76t2u

“So much for the championship hangover.” -Eric Estepp, Out of the Groove

Kyle Busch was not the only driver to sweep the weekend. A driver named Truex swept the runner-up spots too. Well, not exactly. Martin’s younger brother Ryan capped off a strong weekend and finished second in the Xfinity event, equaling his career-best finish in the series. On Sunday, Martin backed his brother’s performance with a second-place finish of his own.

Second again. But wow, we were flying there at the end. Our @bassproshops team did a great job this weekend – road crew and pit crew. We’re making gains on it. Looking forward to trying to go back to back at @ACSupdates next week. #TeamToyota pic.twitter.com/UWoxbxe6O0

“Both Truex brothers ended up finishing second to Kyle Busch this weekend, and it’s somehow the second time both brothers finished second on the same weekend, after the first Daytona weekend in 2016.” -Finley

After four races in the young season, Hamlin has quietly posted the best average starting position and ranks second in average finishing position among all full-time drivers. With three top tens and a Daytona 500 crown, Hamlin continues to move up in the rankings. And, for those of you who were wondering, Hamlin did not wreck Chase Elliott this week, much to the vexation of Ricky Stenhouse Jr.

I mean reaching for it. ? pic.twitter.com/m61Dp8Mtg3

“One day, Hamlin will get into the Hall of Fame and people will still be overreacting about him being around Chase Elliott.” -Michael Massie, Frontstretch

The Phoenix master failed to lead a single lap in the desert. *Gasp* Everyone, please calm down. As pointed out by panelist Aaron Bearden, Harvick has failed to lead a lap in the four out of the last six Phoenix races. Throughout the contest, the nine-time Phoenix winner was dogged by track position issues, poor restarts, passing difficulties, and downright bad luck. 9th place, not bad.

“OH NO! Harvick didn’t lead a lap at Phoenix!” – Everyone, seemingly forgetting that he’s failed to lead a lap in four of his last six Phoenix starts.” -Aaron Bearden, Motorsports Beat

Entering ISM Raceway, Keselowski had one goal in mind: cross Phoenix off the bucket list. Unfortunately, a broken sway bar and a spinning Ryan Preece ultimately ended his chances

Reminded by the crew we have 7 tracks left to win on at nascar’s highest level.

Texas, Michigan, Homestead, Sonoma, Watkins glen, Charlotte roval, and the one we are at this weekend @ISMRaceway

Hopeful and ready to knock this one of the list. ???

“Don’t blame BK if he felt like the Angry Video Game Nerd after some crazy times at ISM.” -Tiongson

Last week, Global Poker signed a multi-race deal with Chip Ganassi Racing to become Kurt Busch’s primary sponsor for select races. Considering their buy-in, Kurt Busch hopes to be all-in as the season progresses. But, this year has been no flop so far. Despite a muck at Daytona, Busch has had three straight top 10s including a pair of top fives.

Enough of the poker puns, but Busch finished in lucky position seven at Phoenix. How about a jackpot?

We are going all in with Global Poker. Great to have you guys ante up with a pair of Aces! @official_glp @CGRTeams ? pic.twitter.com/x0uOhoeL8a

Blaney was on track to have the worst start to his career… that is, until Phoenix. He won the pole and remained competitive throughout the entire day. After a late caution flew, Blaney, on a contrarian strategy with only two fresh tires, was in prime position to score his third career victory. Instead, Kyle Busch caught the Ford driver in the closing moments, relegating Blaney back to a third-place result.

Came up just short today. Our 2 tires faded a little too much at the end. Thank you @moneylionracing for being with us for their first cup race.

“A much needed third-place result for YRB. The No. 12 Ford Mustang looked strong in Phoenix.” -Kobe Lambeth, Kobelambeth.com

A tide may be turning for the Chevrolet camp as Chip Ganassi Racing teammates Kyle Larson and Kurt Busch continue to carry the Chevrolet flag as Hendrick Motorsports continues to struggle.

Good finish yesterday. Felt like we maximized our day and came away with good points. Looking forward to Fontana!

“Suppose that Larson wins this Sunday at Fontana.  Can we finally put a stop to this whole belief that a blue No. 42 car is bad luck?” -Tiongson

Johnson got a top 10. We have come to the time where that gets recognition. Gone are the days where a Johnson top 10 rarely ever got even a fleeting mention in the newspapers the next morning. The championship-caliber driver sure has some massive catching up to do to get back to those days, but a top 10 at Phoenix has returned him to our power rankings.

Second top-10 finish of the season for the Ally team comes at Phoenix!@JimmieJohnson finishes 8th. ? pic.twitter.com/YvN0pcktoG

“Johnson easily had his most competitive race of the year by finishing in 8th place.” -Ryan Holman, Ryan Holman on Youtube

On this week’s edition of Clint Bowyer’s social media chronicles: A guy gets sick on an “aero-plane,” Elvis and a campaign to get Bubba Wallace‘s spotter to the truffle shuffle.

“Take the mask off. Think of all the winning you could do if you had the flu. Just ask Brad Keselowski.” -Zach Gillispie, Frontstretch