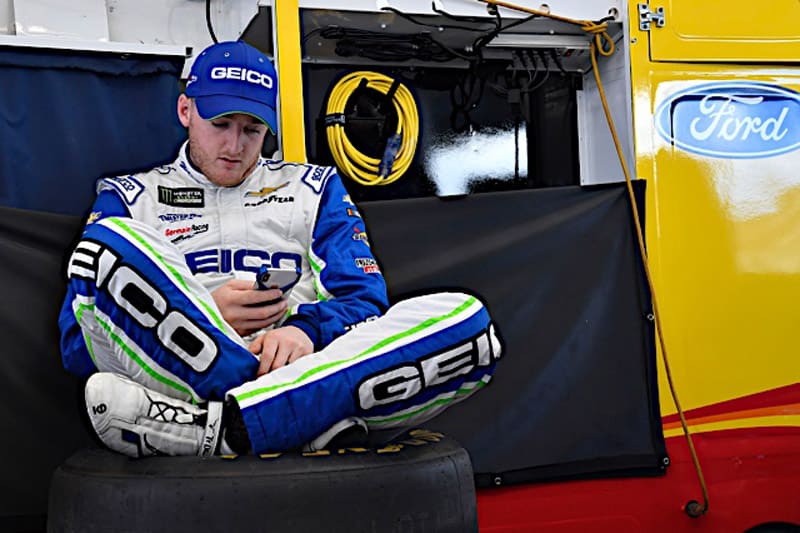 Ty Dillon finally unseats Chris Buescher as the top dog this week. Dillon bested the 2015 Xfinity champion by one spot, finishing 15th in the Ticket Guardian 500 at ISM Raceway.

For Germain Racing and Dillon, the 2019 season has begun relatively well. Dillon has advanced to the second round of qualifying each week, starting no worse than 22nd thus far. Additionally, Dillon has finished sixth, 25th, and 29th coming into Sunday’s race on the one-mile desert oval. He started 20th and essentially ran inside the top 20 for nearly the entire race. Most importantly, there were no mistakes or bad luck that kept the team from capitalizing on the solid run.

“Today was a great day for our GEICO Racing team,” he said. “We consistently ran inside the top 20, kept making adjustments to fine tune the handling, and then got ourselves in a position to run inside the top 15. I know this is what our Germain Racing team can do every single week and I’m proud of all the hard work that is going into building faster race cars. We will keep building on top-15 finishes like this and I know good things will continue to happen for our team.”

Hot on Dillon’s heels for the best in class award was Buescher. Once again, the No. 37 showed some speed on Sunday, this week landing a 16th-place result. Like Dillon, Buescher ran in the top 20 for almost all of the 312 laps. The JTG Daugherty Racing driver is regularly the highest ranking member of our underdog category and will likely continue to be as the season goes on.

Matt Tifft quietly brought his Ford across the line in 20th at the checkered, earning the best finish of his young career. Making just his fourth career start, Tifft steadily moved up from his 30th starting spot and was able to keep his car out of trouble over the course of the race. While his Front Row Motorsports Ford teammates have both had their share of headlines this year, it was Tifft who carried the team banner at ISM.

On Saturday (March 9), the Rod Seig owned No. 39 of Ryan Seig once again led the underdog charge in the Xfinity Series race. Seig finished 10th, his third top 10 in four starts this season. This team has been very competitive and will likely continue to be a mainstay among the front-runners.

The most recent underdog winner in the Xfinity Series, Jeremy Clements had a good day at ISM, finishing 13th. After a forgettable speedweeks, the No. 51 car has started and finished in the top 20 in each of the past three races.

Brandon Brown continued his hot start to the 2019 campaign, notching a 15th-place finish and it was another momentum building day for the SS-Greenlight Racing teammates. Ray Black Jr and Gray Gaulding backed up their impressive day in Las Vegas, with Gaulding placing 16th and Black 18th at the checkered flag.

Gus Dean may be a rookie in the NASCAR Gander Outdoors Truck Series but don’t think that it means he is new to this racing stuff.

The 24-year-old from Bluffton, SC, has 47 ARCA starts, including a pair of victories. He got his first ARCA trophy at Talladega in 2016 and backed it up with another win at Elko last year. Even more impressive, Dean has finished in the top 10 in over half (27) of his starts in that division. Dean also has 33 X-1R Pro Cup Series races under his belt, winning at Memphis in 2014, and a handful of Cars Super Late Model races with a best finish of second at Myrtle Beach in 2016.

This year, Dean makes a run at Rookie of the Year in the Truck Series. Driving the No. 12 for Randy Young, Dean has already shown promise with finishes of 15th, 15th, and 22nd in the first three events.

? RECAP: Racing in the Phoenix desert was a success!@tydillon and the @GEICORacing Camaro ZL1 team earned a 15th-place finish @ISMRaceway. pic.twitter.com/1QkxuCXmp6

Stephen Leicht was evaluated and released after his engine failure earlier in the #iK9ServiceDog200 at @ISMRaceway. pic.twitter.com/dZu5BkIv0e

Top 20 at @ISMRaceway great day and a career best, we will only keep getting better! pic.twitter.com/QL1DTodFO8