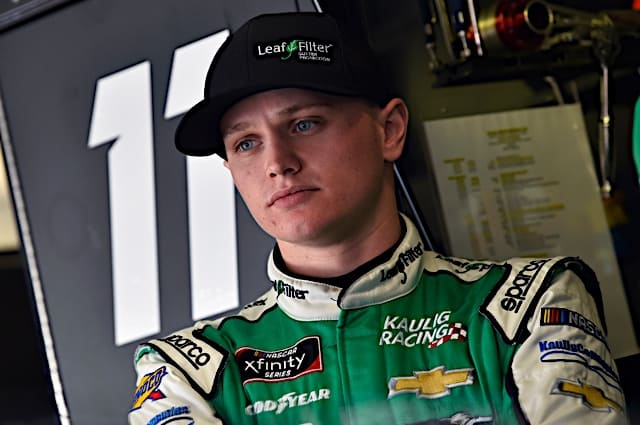 Kaulig Racing is in its fourth year of existence, and the organization is still looking for its first career victory. Justin Haley hopes to be the driver to bring it to them in 2019.

Haley, 19, has spent the majority of the past two seasons (2017 and 2018) in the Gander Outdoors Truck Series. Last season, he made it to the Championship 4 race at Homestead-Miami Speedway, placing third in points.

It was a summer conversation with team owner Matt Kaulig that sold Haley on joining the NASCAR Xfinity Series for 2019, his rookie campaign in NASCAR’s top preliminary division.

“I just got a call one day and [Kaulig] said they were interested in me, and all the puzzle pieces fell into place,” Haley told Frontstretch on how the deal with Kaulig Racing came together. “I’m really happy to be here at Kaulig — it’s a new team that’s developing quickly.”

Developing quickly, indeed. In the team’s first two years of existence, Blake Koch drove the No. 11 car to the postseason, posting 10 top-10 finishes in 66 races. In 2018, Ryan Truex took the helm of the No. 11 and posted 11 top-10s and made the playoffs, while a second team car  was driven by Austin Dillon at Indianapolis Motor Speedway and finished eighth.

Kaulig Racing has a technical alliance with Richard Childress Racing, who’s downsized to just one full-time team (Tyler Reddick) this season. Haley intends on leaning on those at RCR.

He also believes that in order to take that next step as an organization, the team must win, even if he’s a rookie driver.

“I think winning is the next step, that’s the biggest thing,” Haley stated. “To get top fives, top threes, make it into the playoffs and just keep growing as an organization. I think if we just keep growing and getting good finishes, hopefully, a win will fall into our place. Getting that first win out of the way and everything else will pan out.”

A victory would be big for Kaulig Racing. Team owner Matt Kaulig has invested millions of dollars and used his own company, Leaf Filter Gutter Protection, in the sport. Of all Xfinity teams, it could be argued that Kaulig is the best up-and-coming organization, though not yet getting over the hump of finding Victory Lane.

At the same time, it would mean the world for Haley to be the driver to deliver Kaulig its first victory.

“It would be cool to get my first win, but to give a team its first win and get their organization kick-started would be pretty cool,” Haley said. “I think it would keep Matt around. Obviously, he’s in the sport and winning is everyone’s goal. To deliver them their first win, it would be really cool.”

Haley is working with veteran crew chief Nick Harrison this year, who has five victories in the Xfinity Series as a crew chief, four of which came with RCR. The rookie/veteran duo could lead to a postseason berth, which is atop the bucket list for the No. 11 team.

“I think we have good shots at winning. I told the team there’s no reason we shouldn’t win this year. Coming into the year, Kaulig Racing only has one top five. As a driver, I like to win, and I think I showed that last year. We’re going to get more than one top five.”

Confidence is key in NASCAR, and Haley doesn’t lack it. But why was this the right time to move up from the Truck Series?

“Mainly because I don’t want to be in Trucks anymore,” Haley said thoroughly. “In trucks, it’s more truck dependent on how you do. Basically, all the tracks you go to you’re wide-open in qualifying. There’s not really much you can do as a driver, and trucks are just a little bit easier to race.

“In the Xfinity Series, with how I did last year, I ran pretty well in them and kind of proved myself. I got this opportunity to do a multi-year deal and it was the right deal for me. I’m really glad that I took it because I was really interested in moving up and having a little more control. I may only be 19, but the guys I’m racing against are the guys I’ve been racing against since I was a little kid.”

In Haley’s first four outings in the No. 11, he has one stage victory, coming in the season opener at Daytona International Speedway. However, he took the checkered flag in 17th. At Atlanta Motor Speedway, he finished a career-best eighth, while placing 10th at Las Vegas Motor Speedway. Last weekend at ISM Raceway, Haley finished 12th, and he currently sits 11th in the championship standings.

The team hopes to continue its rise, though Haley doesn’t have any real expectations.

“I think we need to be competitive, and if we show that we can run up front, be competitive and make the playoffs, we can just see what happens,” he said. “I really don’t have any expectations except go out there and do what we do best. I think if we focus on Kaulig Racing as a whole and do our job the pieces will fall and we’ll do good.”

The company plans on running the No. 10 car in roughly half the races this season. Ross Chastain drove it to a 13th-place finish at Daytona, and Dillon picked up Kaulig Racing’s best-career finish at Las Vegas, coming home fourth.