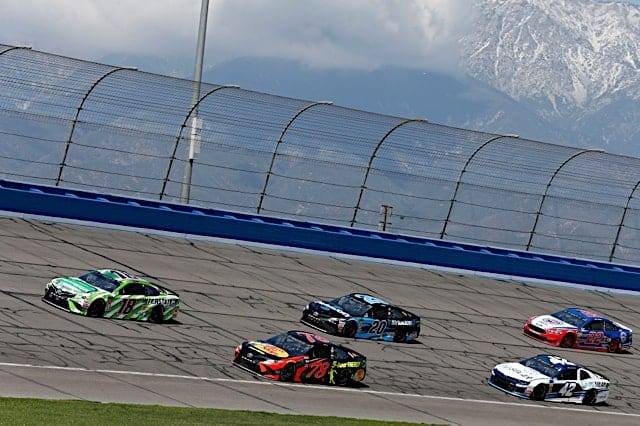 Odds and Ends Around the Track — Auto Club Speedway

This weekend at the Auto Club Speedway in Fontana, Calif., we might see history. If it doesn’t happen this weekend, it won’t take long.

Kyle Busch will hit the 200 career wins mark – a total of his combined wins in the three major NASCAR touring series. Even Busch says any comparisons to the King Richard Petty’s mark is not valid, but that doesn’t keep NASCAR, the media and the fans from getting the debate going. Just how impressive are 200 wins today in all three series compared to 200 in the Monster Energy NASCAR Cup Series back in the day? Let’s dig into the numbers to check it out.

Today, we check out the battle between King Richard of Spartacus against the invading army of King Candy Man of Las Vegius (Sorry, but this title seemed like some sort of low budget sequel to “300”).

Whenever I see NASCAR fans or media or even NASCAR themselves comparing drivers of today to drivers of yesteryear in the sport, I smile because it depends on your age as to how much you respect what the old guys did. When King Richard drove these cars, they didn’t have any of those wonderful luxuries of today like safety or even power steering.

During a social media conversation about the amazing 200 feat, I was told, “Many of Richard Petty’s wins don’t count because they came against six-car fields.”

This is true that at some races you might only recognize five or six of the drivers that Richard Petty competed against. That didn’t mean the other guys were lousy racers because, just like the Pennsylvania Posse today in World of Outlaws Racing, the most talented local and regional drivers took part in those NASCAR barnstorming races back in the day. Each local track has its stars, and most didn’t even attempt to head to NASCAR because they could make more money staying close to home or holding down a real job kept them from heading south to NASCAR.

Now that we have debunked the “Too Many Wins Against Sub Par Drivers” argument, it is time to brag a bit about Kyle Busch. Each Gander Outdoors Truck Series and NASCAR Xfinity Series race that Kyle Busch races in, he faces between two to four drivers that have equal equipment to his because they drive for the same team. His winning percentages in Trucks and Xfinity are impressive even when he is racing against many of the “Not Ready for Prime Time” racers.

As is the case with every cross-generational argument in sports, it is impossible to compare one era to another. This applies to every sport, including racing! Johnny Unitas is the 20th best quarterback in NFL history based on passing yards. Are you going to attempt to argue to me that Vinny Testaverde, who has 6,000 more career passing yards, was a better QB than Johnny U? Kyle Busch is the most amazing national touring series driver in NASCAR history. Richard Petty is the only Cup driver to ever amass 200 wins.

Why the Phoenix Let Down?

For the first time all season, I went away from the race on Sunday (March 10) at ISM Raceway feeling let down.

NASCAR was giving horsepower back to the drivers last week and they had the giant spoilers on the rear that should have given us great racing. Instead, we got only six green flag passes for the lead with most of those coming right after a restart.

Clean air was still worth far more than new tires. There is no doubt that Kyle Busch had one of the strongest cars, but track position was still too important for a stock car race. This wasn’t the fault of the racing package, this was a fault of the race track.

Back when the Copper World Classic and USAC used to come to town, the old Phoenix International Raceway was a tough old-school track with lots of rough edges. When International Speedway Corporation changed the layout years ago, it was to make the track much safer, and the old dogleg in the backstretch was not a great design.

The idea was to bring even more side-by-side racing, but instead, they made the track faster which led to more single-file racing than ever before — except for in the now-almost-psychotic dogleg with drivers racing six wide on restarts and driving way down on what was supposed to be an apron. The new pavement also meant Goodyear had to send a harder tire, taking away the tire-saving strategy of the old track that could be rough on tires.

Faster isn’t always better in NASCAR racing and the track formerly known as PIR is a classic example. Track officials were puzzled why attendance was way down this year despite all of the fancy changes they did to the track that make it much more fan friendly. The style of racing that appealed to the old school race fans who didn’t care about the lack of amenities is gone with the new track design.

My exclusive ratings have predicted the last two winners, but of course, I tried to get cute and ended up with my second choice winning the last two races. This week, Kyle Busch leads the way with 189.2 of a possible 200 points with Brad Keselowski, Joey Logano and Martin Truex Jr. all above the superior cut-off of 180 points. The next cluster of contenders above 175 points includes Kyle Larson, Denny Hamlin, Kevin Harvick, Chase Elliott and Kurt Busch. All but five winners over the past three seasons have had ratings of 175 points or more. This week’s pick is obvious although the new rule package should make the race this weekend the best of the year.

Win: Kyle Busch-Top rated and will grab his 200th win this week

Place: Kyle Larson-High, wide and handsome is a good style in Fontana.

Long Shot: Chase Elliott (25-to-1 Odds)-Solid start to the year and two of three races here finished in top 10