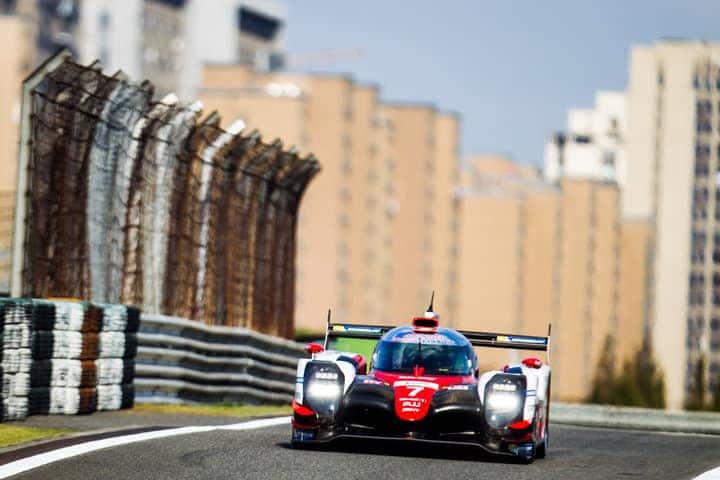 In the afternoon practice session, Toyota’s Kazuki Nakajima was fastest with a lap at 132.056 mph in the No. 8 Toyota.  Nakajima’s time was more than a half-second faster than López in the No. 7.  The fastest non-hybrid driver was Mathias Beche in the No. 1 Rebellion R13-Gibson, more than 1.5 seconds back.  Teammate Gustavo Menezes was fourth in the No. 3 Rebellion, while Brendon Hartley in the No. 11 SMP Racing BR Engineering BR1 was fifth.

LMP2 was topped by a surprise.  Nyck de Vries was fastest in class with the Racing Team Nederland Dallara with a lap at 124.857 mph, good enough for eighth overall.  De Vries’ lap was a half-second faster than Signatech Alpine Matmut’s Andre Negrão in the ORECA 07-based Alpine A470.  TDS Racing’s Matthieu Vaxivière, who is doing double duty this weekend, was third quickest, followed by Will Stevens in Jackie Chan DC Racing’s No. 37 ORECA 07.  Stéphane Richelmi in the second Jackie Chan DC Racing ORECA 07 was fifth fastest.

GTE-Am was topped by Aston Martin Racing’s Pedro Lamy with a lap at 112.160 mph, good for 26th overall.  Lamy’s lap was a mere nine-thousandths of a second faster than Dempsey-Proton Racing’s Matteo Cairoli in the No. 88 Porsche.  That same Porsche had a spin late in the session that triggered a red flag.  There were no injuries reported.

Matt Campbell in the No. 77 Dempsey-Proton Porsche was third fastest, followed by the Ferrari of Clearwater Racing’s Matt Griffin.  TF Sport’s Charlie Eastwood was fifth in his Aston Martin.  The top five drivers in the class were separated by four-hundredths of a second.

In the night practice session, López turned in the fastest lap of the day on the very first lap of the session.  This is due to the fact that there is an alternate pit lane in use for the WEC right after Turn 16.  As a result, an out lap is just the length of the Ullmann Straight, through Sunset Bend, then to the start-finish line, where cars would already be up to speed.  Also of note, the No. 7 Toyota can reproduce that speed.  Teammate Mike Conway turned in a lap within five-thousandths of a second of López’s quick time later in the session.

López’s lap was a half-second faster than Fernando Alonso in the No. 8 Toyota.  SMP Racing’s Stéphane Sarrazin was third fastest in the No. 17 BR1 Engineering BR1, followed by teammate Hartley in the No. 11.  Thomas Laurent was fifth in the No. 3 Rebellion.

Richelmi was fastest in LMP2 with a lap at 124.995 mph, the fastest LMP2 lap of the day.  The lap was nearly a half-second faster than Nicolas Lapierre in the Signatech Alpine.  TDS Racing’s Loïc Duval was third quickest, followed by Stevens in the No. 37 Jackie Chan DC Racing ORECA.  Gunnar Jeannette in the Larbre Competition Ligier JS P217-Gibson was fifth quickest.

GTE-Pro once again saw the No. 97 Aston Martin at the front, this time with Alex Lynn at the wheel.  Lynn topped the sheets with a lap at 114.303 mph.  That lap was three-hundredths of a second faster than Tincknell.  Stefan Mücke was third fastest in the second Ford GT, followed by AF Corse’s Daniel Serra in the No. 51 Ferrari.  Sørensen was fifth in the second Aston Martin.

GTE-Am was nowhere near as close as it was in the first session.  Gulf Racing’s Ben Barker was fastest with his Porsche with a lap at 112.833 mph.  That lap was eight-hundredths of a second faster than the Ferrari of Spirit of Race’s Giancarlo Fisichella.  Cairoli was third, then Griffin and Lamy.

Qualifying for the 1000 Miles of Sebring is scheduled to begin at 9:30 p.m. Thursday night.  The session will air live on MotorTrendOnDemand.com (available only via subscription).