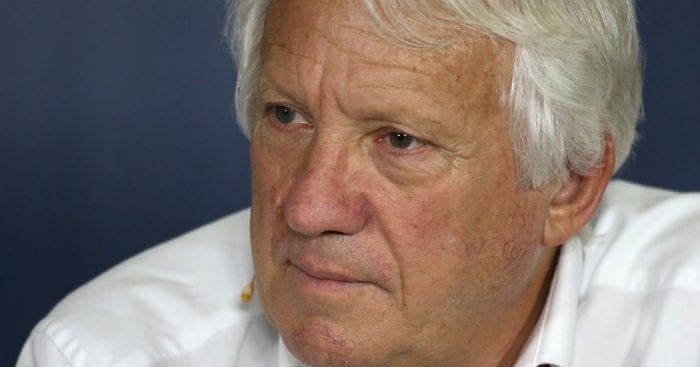 Formula 1 race director Charlie Whiting, regarded as one of motorsport’s most influential figures, died unexpectedly Thursday (March 14) of a pulmonary embolism. He was just 66 years old. Whiting’s death comes three days before he was due to officiate Formula 1’s season-opening Australian Grand Prix.

Whiting had been the chief steward of the International Automobile Federation for Formula 1 since 1997. The motorsports leader gained respect from fans and competitors alike for his calm demeanor and hardworking attitude.

The Englishman provided a steady hand overseeing F1’s technical regulations, competition, and race weekend event operation. Most importantly, he has been credited as being a driving force for safety advances. That includes the introduction halo cockpit protection device, a system which many believe saved Charles Leclerc in last season’s Belgian Grand Prix.

Growing up near the infamous Brand Hatch Circuit in Kent, England, Whiting had been involved in auto racing nearly his entire life. In 1976, Whiting came on board his brother Nick’s team for driver Divina Galica. Over the next decade, Whiting found employment at Hesketh Racing and Bernie Ecclestone’s Brabham operation.

“I have known Charlie for all of my racing life. We worked as mechanics together, became friends and spent so much time together at racetracks across the world,” F1 managing director Ross Brown said upon news of Whiting’s death. “I was filled with immense sadness when I heard the tragic news. I’m devastated. It is a great loss not only for me personally but also the entire Formula 1 family, the FIA and motorsport as a whole. All our thoughts go out to his family.”

Other F1 personalities and drivers took to social media to express their condolences.

Horrible news from Melbourne. All my thoughts goes to Charlie's family.
The motorsport world will miss you.
R.I.P. pic.twitter.com/zrKIpChFFA

A sad day for all of us, thank you for everything you did for @F1 Charlie!
RIP? pic.twitter.com/K2pEQi8GwK

It is with immense sadness that I learned of Charlie Whiting’s passing. He was a central & inimitable figure who embodied the ethics & spirit of motor sport. @F1 has lost a faithful friend & a charismatic ambassador. All my thoughts & those of @FIA go out to his family & friends pic.twitter.com/RhCR1M5rJL

Very sad and shocked to hear Charlie passed away. Thank you for always looking out for us, F1 will not be the same without you. RIP Charlie ?? pic.twitter.com/EzD6q0xmPu

Really sad to hear about the passing of Charlie Whiting. He cared so much for us drivers! For our safety and for trying to keep things fair out on track. My thoughts are especially you, Mrs. Whiting and your children.#ThankYouCharlie #CharlieWithing

Everyone at Scuderia Ferrari is deeply saddened to hear that Charlie Whiting has passed away.

The whole motorsport family will miss you. Thanks for everything you did Charlie! R.I.P ? pic.twitter.com/UUm4diOoZE

Whiting is survived by his wife and two adult children. Michael Masi, a veteran race director among the Australian V8 Supercar ranks, will take his place this weekend.