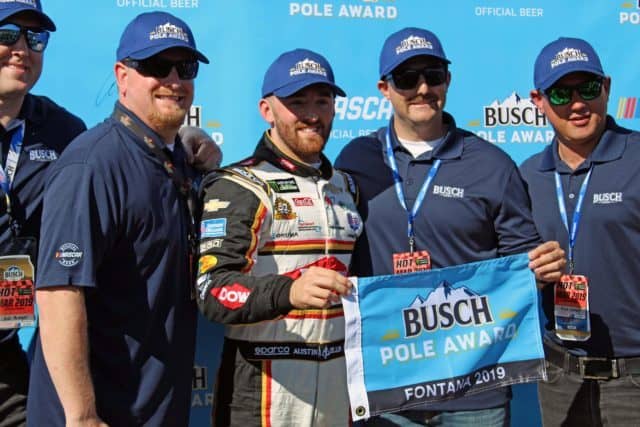 Fontana, Calif. – For the second straight week, qualifying in the Monster Energy Cup Series ended with people buzzing with the drama they just witnessed.

This time though? It wasn’t a good thing.

Austin Dillon won the pole for the Auto Club 400 at Auto Club Speedway after he was fastest in the second round of knockout qualifying. He was awarded the pole when nobody made it to the start/finish line on time to start a lap for round three. Everybody was trying to wait until the last moment and waited just a little too long.

"I've never seen anything like this before in my life."- DW

“That was fun right there. That goes back to round two,” Dillon said after qualifying. “Andy Houston [spotter] did a great job getting us a hole. Our Dow car has been good the whole day. I felt like it was the fastest car here and it feels good to get that pole. That was wild there. Everybody was fighting for it.

“The 18 (Kyle Busch) took off and I was kind of edging back and forth… and my spotter was counting down the time. I knew 45 (seconds) was our drop-dead time coming off pit road. I just kind of waited and no one wanted to make it. At that point, we knew it reverted back to us.”

Dillon was top of the charts while most people elected to go in single-file groups to just advance to the second round. Among the notable names to not join the Round of 24? The defending race winner in Martin Truex Jr., who won the pole and the race last March. The No. 19 driver will start 26th on Sunday to try and go two-for-two in Fontana.

Stage two was less eventful than round one, however, we did see more drafting than we did in round one. Kurt Busch elected to go out by himself instead of going in a draft and held the top spot for more than 3/4th’s of the entire session.

The rest of the group went with under four minutes remaining and once again, Dillon was two-for-two in qualifying in which his Dow Chevy was P1 on the pylon. Brad Keselowski, Kurt Busch, William Byron were among the notable names to not make it to the third and final round.

The Monster Energy NASCAR Cup Series teams will have two practice sessions tomorrow. Both will be televised on Fox Sports 1.

Another bullet in NA$CAR’s foot. That just about takes care of both of them. Have to pick a different body part.

What an exercise in stupidity. Time to go back to single car qualifying or severely tweak what they have now. Matt Debenedetto had the best comments on qualifying today. At least NASCAR admits that this is a big problem since Scott Miller said there would be changes to the system by Texas.

They better do something. I will not watch another round of qualifying at any track greater than 1 mile until they fix this drafting issue. Way too stupid to waste my time watching.

If nascar is looking for a reason for me to NOT watch qualifying, they’re succeeding beyond their wildest dreams. Unless they change the format I’m done.