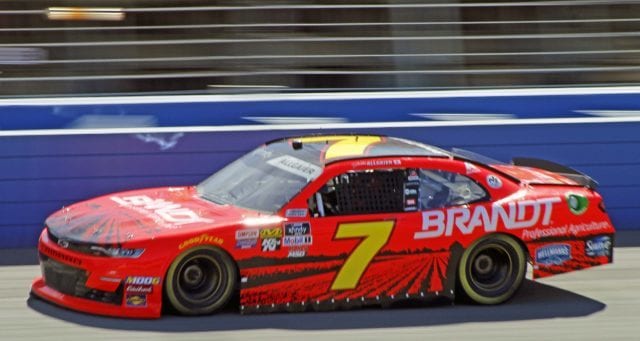 Custer led the first session at Auto Club with a time of 40.669, just over 177 mph. Christopher Bell was second and Kyle Busch, seeking his 200th win in NASCAR, was third quickest at 40.828.

Tyler Reddick was fourth fastest, however, did find some trouble at the beginning when his Hurdl Chevrolet slapped the fence in Turns 3 and 4.

.@TylerReddick fills in @NASCARONFOX on this first practice session. The @WeAreHurdl had speed, finishing P4, despite the damage and will be back out for final practice. pic.twitter.com/6iA73DZkoN

In the second practice, Allgaier showed his speed in his Jr. Motorsports Chevy as he ran a lap of 40.436 seconds, a little over of 178 mph. Reddick, Busch and Gragson round out the top 5 in the second of two practices for the XFinity drivers.

There were two incidents in this session involving one of the drivers that was involved in the first practice. Ray Black Jr spun off of Turn 2 but he did not hit anything and was able to resume practice before the session ended.

After the No. 07 goes for a long slide out of Turn 2, we're back under green in final practice at @ACSupdates!

The second incident involved the 2 of Tyler Reddick as the Corning, California native spun his Hurdl Chevrolet out but unlike last time, he walked away with little to no damage.

Now that's what you call looking at the bright side, @TylerReddick. ?
?⬆️

Xfinity Series teams will qualify tomorrow at 1:10 PM ET with the green flag waving just a little over 5:00 PM ET. Both events will be on Fox Sports 1.

No link to practice 2 times

That issue has been corrected. You can always visit our Race Weekend Central page as well for practice times, results, and entry lists for each NASCAR race this year! – Tom B.