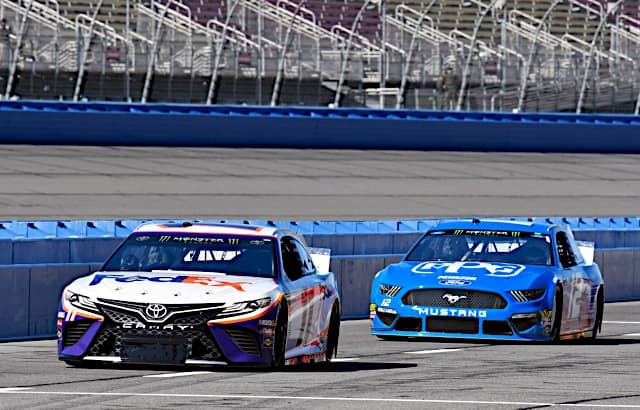 The final week of the West Coast Swing begins Sunday, March 17 at 3:30 p.m. ET for the Auto Club 400. The two-mile Auto Club Speedway will have the same package as used two weeks ago at Las Vegas (lower horsepower and aero ducts). This track, however, has several lanes commonly used, which should lead to great racing especially on restarts.

Recent history at this track indicates that qualifying position is important, as the previous two winners here started on the pole. That may not be the case this year, but you still will want drivers near the front that can lead laps to help boost your DraftKings score.

Is there really anyone hotter than Kyle Busch this year? He had a monster day last week both in the race and in our lineups with 145 DraftKings points. The man approaching 200 career wins throughout the three top series has proven he can be worth his salary. Six of his last seven races here he has finished in the top 10, and five of those were in the top five. He qualified near the front so he is in place to lead some laps in this race, and he has a very fast car. His DraftKings points have been inconsistent this year, but he has still done very well so far, and is a favorite to win here once again.

Keselowski has good history at Fontana, and has performed well so far this year. The Penske driver has four straight top-10 finishes here, having won the first one of this streak in 2015. At Las Vegas this year (with the same package as this week), Keselowski earned fantasy players 74 DraftKings points. He qualified 13th and isn’t as expensive as Kyle Busch, though he may not be able to get to the front right away. He still can give us fastest lap points.

Larson has great history at two-mile ovals (though 2018 at Michigan was not as good). He has been fast this year. The Chip Ganassi driver finished last week’s race with 63 DraftKings points and was a good pairing with Kyle Busch. In the previous two seasons at Fontana, he won and was runner-up after starting both races near the front of the field. He qualified 15th, which can give us bonus points for positive point differential (if he can stay out of trouble).

I like Truex Jr. in this race. For one, he’s the reigning Auto Club 400 winner. Secondly, he has been fairly consistent so far in 2019, with three straight races of more than 60 DraftKings points. Though starting 27th, the Joe Gibbs Racing driver has a fast vehicle that can make up those positions and give us fast lap and point differential points. I do believe a win is coming for him, but it will be difficult in this race (though possible).

Kurt Busch does not have great recent history at this track, though he did win in 2003. I chose him because of his 2019 performance thus far. He has finished in the top 10 in three straight races this year, and led some laps at Las Vegas due to the team’s risky pit strategy. It paid off in that race, and they may need to gamble in a similar way again in this race after qualifying 21st. He has been very impressive with his new team, and just may be the first Chevy driver to win this year.

Johnson has an incredible track history here; his numbers are remarkable. I believe he is finding his footing now with his new crew chief, as they were fast in the first practice today. The Hendrick Motorsports driver last won at Fontana in 2016, and he finished in the top 10 last week. He can give us some point differential points after qualifying 11th, and can give us some fast laps points as well. He may be able to pair with one of the more expensive drivers.

Stenhouse Jr. is risky but he has finished in the top 20 in all four races so far in 2019. He is starting in 12th position. He did give us 45 DraftKings points at Las Vegas, but I’m unsure whether he can duplicate that this week.

We really don’t know how Byron will perform here, but he did lead a lap last year. He finished 16th at Las Vegas and earned us 40 DraftKings points after leading 21 laps and having five fastest laps.

(Also like: Matt DiBenedetto and Ross Chastain for GPP/values)