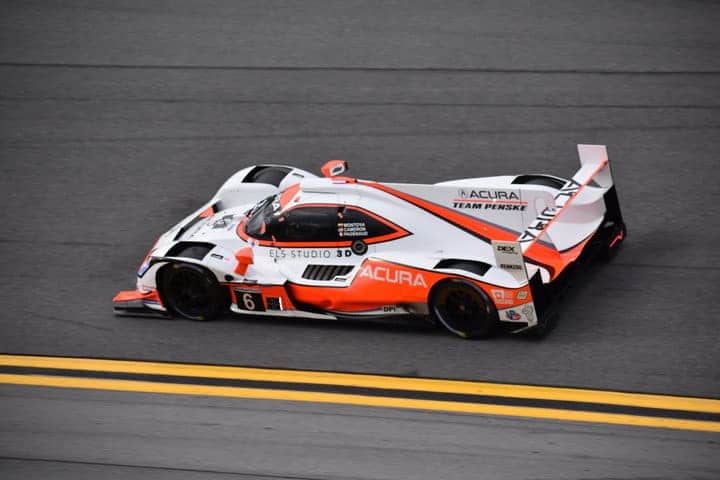 Cameron’s pole winning lap was at 127.180 mph, the fastest IMSA lap of the weekend.  The lap was one-seventh of a second in front of a rare tie.  Both Mazda Team Joest’s Tristan Nunez and Acura Team Penske’s Helio Castroneves set the same lap (127.006 mph).  In NASCAR, the team highest in points gets the position.  In IMSA, it goes to who did it first.  Nunez turned in his lap roughly one minute before Castroneves, so he gets the spot on the front row.

Action Express Racing’s Filipe Albuquerque was the best of the Cadillacs in fourth.  Teammate Pipo Derani rounded out the top five.  In LMP2, PR1 Mathiasen Motorsports’ Matt McMurry claimed the pole with a lap at 122.703 mph.  The lap was a mere 11-thousandths of a second faster than Performance Tech Motorsports’ Kyle Masson.

In GT Le Mans, it was a Porsche GT Team sweep of the front row as Patrick Pilet won the pole with a lap at 116.170 mph.  Laurens Vanthoor will be right alongside.  Corvette Racing’s Antonio Garcia began his long Friday with a third-place qualifying effort, while Ford Chip Ganassi Racing IMSA’s Richard Westbrook was fourth.  Tommy Milner in the second Corvette was fifth.

Meyer Shank Racing with Curb-Agajanian’s Trent Hindman won the GT Daytona pole with a lap at 112.278 mph, the only driver in the class to dip below two minutes.  Hindman’s lap was nearly three-eighths of a second faster than Turner Motorsport’s Robby Foley in the BMW M6 GT3.  PFAFF Motorsports’ Zacharie Robichon qualified third in his Porsche, followed by Brandon Gdovic in the Precision Performance Motorsports (PPM) Lamborghini.  The Rick Gdovic-owned team had to make hours of repairs to their No. 47 Lamborghini after Don Yount crashed Thursday in Practice No. 2.  Christina Nielsen will start fifth in class in her Acura.

Coverage of the Mobil 1 12 Hours of Sebring presented by Advance Auto Parts begins Saturday morning at 10:30 a.m. on CNBC.  The race will stay on there until 1 p.m.  At that point, it will be exclusive to NBCSports.com and the NBC Sports App until 3 p.m.  From 3 p.m. to the finish will be live on NBCSN.