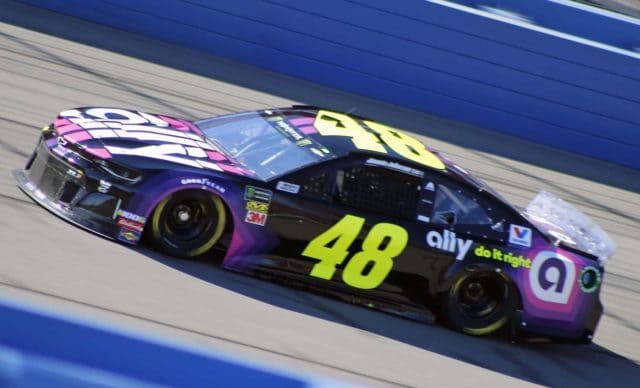 Jimmie Johnson led the first and only practice session from start to finish during a windy Friday morning at Auto Club Speedway.

Practice is complete – @JimmieJohnson and the No. 48 @allyracing team finished in first place. Next up – qualifying at 5:40pm ET. pic.twitter.com/nbyraoYgaU

Six-time Auto Club winner Johnson led the session with a time of 40.137, (179.386 mph). Austin Dillon, Chris Buescher were second and third, respectively, with Kyle Busch, and Denny Hamlin rounding out the top five.

Most drivers ran single-file with only a few trying a two-car draft. A couple of the drivers who started the drafting? Roush Fenway Racing teammates of Ricky Stenhouse Jr and Ryan Newman.

#NASCAR … what does the draft mean at @ACSupdates?

Ryan Newman and Ricky Stenhouse Jr. went out in a two-car draft.

All 38 of the entered teams ran laps in the final session, and no drivers ran more than 10 consecutive laps.

The Monster Energy NASCAR Cup Series teams are done for the day practicing but they will be fighting for the top spot in qualifying Friday afternoon at 5:40 p.m. ET on FS1.