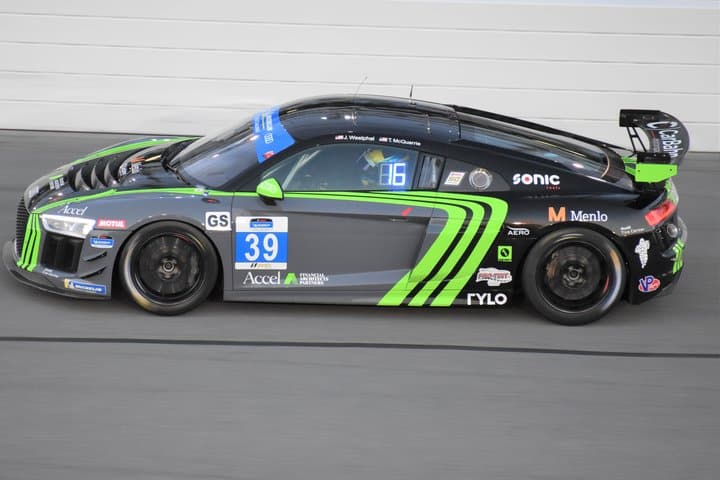 CarBahn Motorsports’ Tyler McQuarrie and Jeff Westphal dominated the proceedings Friday (March 15) at Sebring International Raceway to claim victory in the Alan Jay Automotive Network 120.  While both drivers have previous victories in the Michelin Pilot Challenge, it is the first-ever victory in the series for both CarBahn Motorsports and the Audi R8 LMS GT4.

TeamTGM’s Owen Trinkler started from the pole, but McQuarrie wasted little time dispatching of the defending Grand Sport champion to take the lead on the first lap.  It was a lead that the CarBahn squad would rarely give up for the rest of the race.

For Multimatic Motorsports, Friday’s race was the series debut for four of ThorSport Racing’s drivers.  Myatt Snider qualified the No. 15 Mustang 10th and quickly moved a spot before dropping back.  For his entire stint, he kept himself relatively close to where he started the race.  Ben Rhodes was similar in his performance until trouble struck.  Rhodes went straight at Sunset Bend and went into the tires with 30 minutes remaining, bringing out a full course caution.  Rhodes was able to drive the car back to the pits, but his (and Snider’s) day was effectively over.

The second car, shared by Matt Crafton and Grant Enfinger, actually started better.  Crafton drove up from the 13th starting spot and got into the top 10.  An extra pit stop ended up dropping the team down the order after Enfinger got in, though.  Right around the time Rhodes crashed, Enfinger had a spin of his own.  Ultimately, Crafton and Enfinger brought the No. 22 home 15th in Grand Sport, 20th overall.

In the final 20 minutes, Westphal was pressured for the lead by the McLaren of Motorsport in Action’s Jesse Lazare. Unfortunately, much like Daytona, things fell apart in the final laps.  This time, the brakes ran low on stopping power for Lazare.  As a result, he fell back, allowing Westphal an easy drive to the win.

BimmerWorld Racing’s Devin Jones and James Clay finished second, 7.75 seconds back.  Lazare and Corey Fergus were third with their spent brakes, having just barely held off the Mercedes of Riley Motorsports’ James Cox and Dylan Murry.  KohR Motorsports’ Kyle Marcelli and Nate Stacy were fifth in their Mustang.

In TCR, LA Honda World Racing had an up and down race.  The team’s No. 73 Honda of Mat Pombo and Mike LaMarra were out before LaMarra could break a sweat in the car.  Meanwhile, Tom O”Gorman and Shelby Blackstock came to the forefront once again.

JDC-Miller MotorSports’ Britt Casey Jr. started on pole and led early without issues.  Ultimately, the race was partially decided on pit strategy.  Blackstock pitted the No. 37 Honda on Lap 26 for what was the team’s only stop of the race.  Atlanta Speedwerks stopped earlier and put Todd Lamb into the lead.  While Blackstock was enjoying his time in the IMSA Radio booth with John Hindhaugh and Jeremy West, O’Gorman was able to keep himself close to Lamb.  On the final restart of the race, he pounced and took the lead.  From there, O’Gorman pulled away to take his and Blackstock’s second straight victory.

Casey and Mikey Taylor ended up second, 7.223 seconds back.  Honda of America Racing Team’s Ryan Eversley and Chad Gilsinger were third in another Honda.  Bryan Herta Autosport with Curb-Agajanian’s Mason Filippi (fresh off a TCR weekend sweep at Circuit of the Americas) and Harry Gottsacker were fourth, while Colin Mullan and Max Faulkner were fifth in the No. 52 Honda.  Lamb and Brian Henderson finished eighth.

The IMSA Michelin Pilot Challenge is off from not through the whole month of April before returning to action at Mid-Ohio Sports Car Course on May 4.