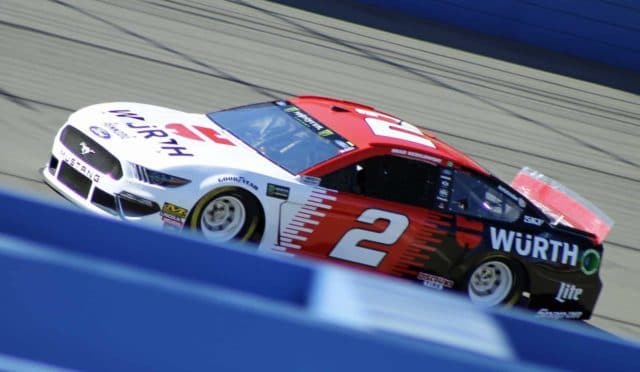 In first practice, Bakersfield, California native Harvick ran the fastest of his twenty two laps at a time of 40.940 seconds, at just under 176 mph.

Some drivers attempted to bump draft during the session, but the session saw mostly single-file runs throughout the 55-minute practice session.

Kyle Larson bumped the wall during the session but it was not enough to bring out the caution. He will not need to go to a back-up car.

Slight damage to @KyleLarsonRacin’s Chevy in today’s opening practice session. After a quick trip to@the garage for some adjustments, he’s back on track pic.twitter.com/7j4k9oC8cP

Keselowski was fastest in 10-lap averages with an average speed of 173.219 MPH. Busch was second, followed by Alex Bowman, Hemric and Aric Almirola

Keselowski’s Wurth Ford also turned the fastest speed of the session at 176.648 MPH with Hemric right behind him at 176.548 MPH.

Some drafting took place in this final practice with Team Penske drivers Keselowski and Joey Logano starting the draft with Truex Jr and Denny Hamlin right behind them.