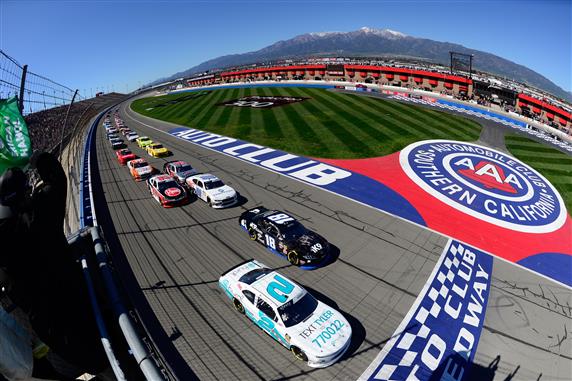 The first two stages in the NASCAR Xfinity Series race at Auto Club Speedway were cool, calm and collected — as cool as the flip side of a pillow.

Then all hell broke loose.

Multiple Xfinity Series championship contenders ran into trouble over the course of the race, most of which occurred in the last half of the Production Alliance Group 300.

It started when Christopher Bell had to return to pit road after a scheduled pit stop to try and repair a stuck throttle.

And that super fast pit stop for @CBellRacing was for naught, as he had to come back in because his throttle is sticking. Now being scored 15th, last car on the lead lap. #ProductionAllianceGroup300

Bell was ultimately able to rebound, leading five laps and finishing in the third position.

The attrition continued with John Hunter Nemecheck, a miscommunication ending his day on lap 85.

Nemecheck was running in in the top 15 when he tried to dive down between the No. 22 of Austin Cindric and the No. 39 of Ryan Sieg in which Sieg made contact with Nemecheck’s left rear fender, sending Nemechek’s No. 23 into the wall.

“Just a miscommunication between me and my spotter in the spotter stand,” Nemecheck told Frontstretch after being released from the infield care center.

The Xfinity Series regulars were not out of the woods yet. Tyler Reddick, who was running second at the time, had to make an unscheduled pit stop because his right rear was going down.

Tough break for @TylerReddick, who had a fast @WeAreHurdl Chevrolet all weekend long. https://t.co/0WYsjt4r4v

Reddick rebounded to finish fourth but was visibly disappointed by the result.

“When you keeping hitting a wall, you will cut a tire and that is what happened to us,” Reddick said after he climbed out of his car. “We lost a lap because of it but luckily we caught cautions when we needed to and we got back in the race.”

Reddick wasn’t the only one having trouble and he wouldn’t be the last as yet another one of the championship contenders ran into issues. Coming out of turn four, Cindric spun out, bringing out the caution yet again.

.@AustinCindric spins after a tire goes down.

He comes down pit road twice for some fresh tires and to check the car over. All is good, he heads back out 14th. #NASCAR pic.twitter.com/pbfxFf3Ldv

Like his counterparts, Cindric rallied to finish sixth and was relatively pleased after the race.

“We made our car better throughout the day and we really got into top five position and ended up blowing a right rear tire and to come back from that and recover and ended up finishing sixth…,” Cindric said after the race.

Jones spun in Turns 3 and 4 on lap 124 and caused Ryan Preece to also spin out in his bright yellow Velveeta Shells and Cheese Chevrolet to avoid making contact.

“I don’t know on the spin what happened there.” Jones said after the race. “It was just a big dump of air or something maybe that caused the car to get really loose on us.”

When it was all said and done, though, after going two laps down, Reddick still holds the series point lead over race winner Cole Custer by seven points.

The NASCAR Xfinity teams will have a week off for the first time in 2019 before getting back on the road and heading to the 1.5- mile Texas Motor Speedway on Saturday, March 30th.