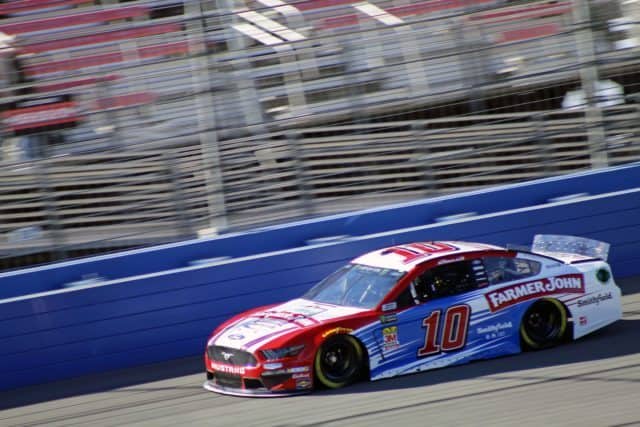 Almirola started the race from third and led some laps during the early portion of the race.

With the new rules package, many drivers, media and fans were truly unsure of what to expect in Sunday’s race. Almirola was one of the drivers who thought it was a typical California race that included crazy restarts but once the field spread out, it became a basic single-file train with the occasional drivers passing each other or lapped traffic.

“I thought it was very typical California to be honest,” said Almirola. “The restarts were wild and crazy like we always see here at Auto Club Speedway and then track position. It gets strung out and we fought track position a lot today. The cars are very difficult to drive in the wake of air of the cars in front of you, so just challenging. The restarts are definitely exciting, the fans definitely get their money’s worth for a few laps at least.”

A tough driving car makes for a handful and many of these drivers felt the wrath of this new package at Auto Club. Almirola used his speed and luck, pushing it to the limit, resulting in a ninth-place finish. He stated that the team never found the right adjustments for him to break back into the top five and it was noticed as he basically was on the outside looking in for the last part of the race.

“All-in-all it was a great day for our Farmer John Ford Mustang, got to go up front and lead some laps there in the beginning and run very strong. We just never made the right adjustments to get the car where we needed, we were just a tick off all day. We probably had a top-six car and we lost some track position and that’s all we could do to muster up a ninth.”