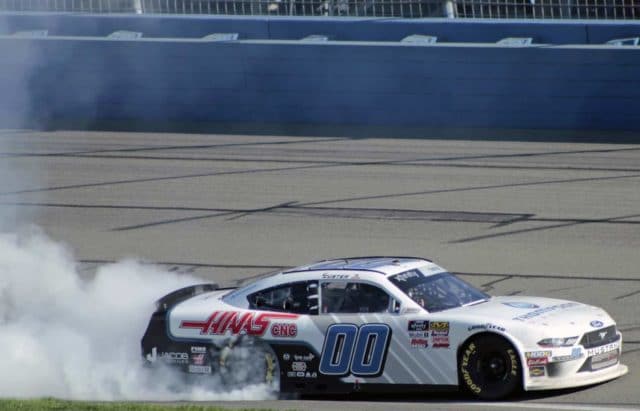 NASCAR caught a break at the tail end of its West Coast swing. Auto Club Speedway Sunday (March 17) was another underwhelming race with the sport’s new handling package. One driver dominated, leading seven times for 134 laps and cruising to a 2.3-second victory. The Auto Club 400 had 18 lead changes, two more than last year and most occurred during green-flag pit stops. If not for the winner, this race would be sanctioned a certified yawner.

Lucky for NASCAR, that winner was Kyle Busch.

The words “Busch,” “Richard Petty” and 200 promptly drowned out the NASCAR critics. It’s a number that causes an instant opinion for everyone in the sport; on Sunday, Busch finally reached it. Whether you think the total is gibberish or you think Busch’s accomplishment is greater than Petty’s, you’re probably talking about it at the office this week.

That, of course, is a great moment for NASCAR, not lost on those who witnessed it.

“For my little brother to have 200 wins, they’re all added up through his hard work and his dedication to perfection,” Kurt Busch said afterwards. “A number is a number and it’s significant. When you’re running Trucks, Xfinity and Cup every week, you’re wearing your body out.”

Busch has now won five of the last eight NASCAR races contested in Cup, Xfinity and Trucks. His 14 playoff points lead the series, mimicking the type of start Kevin Harvick got off to last year. That dominance could be the center of conversation. Instead? The 200 debate kicks it to the curb.

Plus, the sport gets a breather from that awkward handling package and goes to a track, Martinsville Speedway, where everything typically turns out right. There’s nothing that ails the sport a good short track can’t fix. And, believe it or not, sub-par racing on the west coast swing actually produced increased TV ratings (pending this week’s Auto Club overnight, of course).

Add in Friday’s qualifying fiasco, one where none of the final 12 cars took a time, and it feels like the sport dodged a serious bullet. They have Kyle Busch, this number and the conversation that goes with it to thank. –Tom Bowles

In qualifying, reigning Xfinity Series champion Tyler Reddick edged out Kyle Busch for the pole. But during the Production Alliance Group 300 at Auto Club Speedway, it was Cole Custer that was California dreamin’, beating the No. 18 car.

Busch dominated the afternoon, sweeping the first two stages, and leading a race-high 98 laps. However, on a late-race restart, Custer got out ahead of the No. 18 car, continuing to pull away, taking the checkered flag with a two-second advantage.

The victory was Custer’s third of his career, the first of which is before the month of November. Custer, Reddick and Busch are tied with a series-high three top-five finishes this season—Busch doing it in just three races.

Christopher Bell finished third, despite saying it was one of the toughest weekends of his young career. Reddick rebounded from an incident with the outside wall to finish fourth, while Chase Briscoe picked up his second career top-five finish.

By finishing 11th, Ryan Sieg is the only driver to have top-11 finishes in the opening five races this season. Meanwhile, Brandon Brown picked up his third top 15 of the season, doing it all with very limited sponsorship. The series has an off week before going to the Lone Star State on March 30. – Dustin Albino

Sports Cars: Sebring Is So Rough, It Can Cause Dental Issues

Today, this is no longer the case, but prior to the repaves at Daytona International Speedway and Talladega Superspeedway, drivers would often qualify for Cup races while wearing mouthpieces like football players do.  Why?  Those tracks were the bumpiest on the circuit and had the potential to cause dental issues with the setups being used at the time.

Sebring International Raceway is every bit as bumpy as Daytona and Talladega ever were in some places, if not more so.  The track was built on part of a World War II-era base and uses a couple of runways.  Parts of the track have not been resurfaced since then, resulting in one of the bumpiest tracks in the world.

Stevan McAleer found out what that can do to a driver in qualifying for Thursday’s IMSA Prototype Challenge race when he chipped a tooth.  Despite the pain, he shouldered through the start-and-stop session, qualifying fifth.

In the race, McAleer dealt with hot and humid weather and the fact that he was driving solo in the 105-minute race.  Despite the pain, McAleer was able to pull out a swell victory in his Norma M30. – Phil Allaway