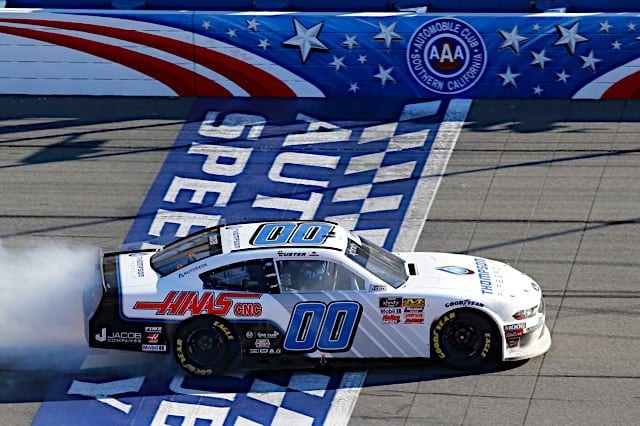 Kyle Busch haters, this one was for you.

The Production Alliance Group 300 at Auto Club Speedway sure started out looking like another romp for Rowdy. He won the first two stages with ease, something he hadn’t done even while rolling to back-to-back Xfinity Series victories the previous two weeks. Busch led almost every lap, put more than half the field a lap or more down, and was so untouchable by about five laps after every restart that someone at the AP jumped the gun and ran the story everyone expected to see, touting Busch as matching Richard Petty with 200 career NASCAR national touring series victories.

A funny thing happened along the way to history, though, or at least something that put a smile on the faces of anyone hoping that an Xfinity Series regular would finally win in Fontana. First, a spin by Austin Cindric brought out a caution with less than 50 laps to go. A poor pit stop by Busch’s crew lost him seven spots on pit road, then NASCAR piled on even more misery for the No. 18 team by ordering up an uncontrolled tire violation.

Even so, Busch was cruising back up through the field, and he even caught a fortuitous break when both Brandon Jones and Ryan Preece went around in clouds of smoke. Rowdy restarted sixth, and with two cars on old tires in the front row, the ensuing chaos was almost certain to work in his favor.

Except it didn’t. Cole Custer, who showed the speed to close and pass on short runs but fell off on longer runs, got out to the lead. Busch made his way up to second, but in a surprising turn of events, he actually lost ground to the leader as the laps wound down. Already salty about his crew’s performance, Busch simply seemed at a loss for why his Supra didn’t have the same speed when he needed it most.

“Just lack of grip there at the end,” Busch said to FS1 after the race. “We just didn’t have the speed we needed with the 00. I guess we could match his lap times. Earlier in the day, we were two-tenths better than some of the guys, and there at the end, we weren’t.”

It was a very matter of fact admission, but no one will feel too sorry for a guy who is going to get his historic 200th win sooner rather than later. In the meantime, it’s easy to feel good for Custer, who grabbed his third career NASCAR Xfinity Series victory in his home state. Flipping the expected script to do it is just icing on the cake.

You mean besides someone other than Busch winning in a race he ran? Custer actually made some history of his own, as he broke an incredibly long string of futility for Xfinity regulars at Fontana:

That’s right, it had been more than 20 races since someone other than a Cup Series ringer had won in an Xfinity car at Auto Club Speedway. We’ll have to get the Frontstretch stats interns to double check (related: there aren’t really any Frontstretch stats interns), but it would be hard to believe any other track currently on the schedule has been as hopeless for Xfinity drivers.

And yes, he needed some misfortune to set things up correctly, but make no mistake: Custer deserved the win. He was able to outrun the best in the business during the laps that mattered most, and that’s something worth celebrating.

Frontstretch already has an excellent column devoted to NASCAR on TV, so this isn’t necessarily the place for in-depth broadcast criticism. That said, it’s fair to call out Fox Sports when it’s deserved, and there’s no question that Saturday wasn’t a shining moment for FS1.

What did the network miss? Just the most critical moment of the race, which was Cindric’s spin in the final stage. There are always going to be incidents that happen during commercial breaks, but FS1 didn’t show viewers this one because they were showing a live promo from Dallas for the Errol Spence Jr.-Mikey Garcia boxing match.

Yours truly is a huge fan of the sweet science, and FS1 was undoubtedly obligated to show a cut-in for boxing at some point. Timing is everything, though, and the proper time to do this would have been during a caution — especially in this current era of stage racing, when you already know there will be two fairly long cautions at fairly predictable times during any race.

The honorable mention bad moment was also caution-related, as FS1 was doing its side by side commercial thing when Jones and Preece did their synchronized spinning (soon to be an Olympic sport). It was really hard to tell what was happening, and definitely a suboptimal experience for fans watching at home.

Some of the toughest crashes to watch are the ones where a driver is careening helplessly towards the wall and is helpless to stop it. That’s exactly what happened to John Hunter Nemechek, as he made contact with Ryan Sieg, and his No. 23 Chevrolet immediately made a beeline for the inside wall at the very end of pit road.

Happily, Nemechek immediately got on his radio and informed his team that he was okay, because that was a nasty hit. In fact, it was the kind of collision that you show to non-NASCAR fans to help explain why the SAFER barrier is so important.

Since he came out of it relatively unscathed, it’s not inappropriate to point out that Nemechek appeared to be the one to blame for that incident, as he was giving Cindric the business for a while and then tried to squeeze into a space in front of Sieg that simply didn’t exist. Still, no one likes to see a crash like that. Props to all the people who work on making racing less dangerous.

This award almost went to Jeremy Clements, who should definitely give an atta-boy to his crew since he seemed to turn up in 10th position after every round of pit stops. He did finish 14th and on the lead lap, but there was one member of the underdog crew who did even better on Saturday.

That would be Justin Haley, who picked up his third top-10 finish in three races. We could perhaps squabble a bit about whether he’s really an underdog considering his strong performance in the Truck Series last season, but let’s just say Kaulig Racing isn’t exactly Joe Gibbs Racing when it comes to financial resources. The 19-year-old rookie made one heck of a save midway through the race in the middle of traffic, and it paid off with another strong day.

Only two Cup Series drivers dropped down on Saturday, and we’ve already discussed them both. Preece is rapidly making a name for himself for managing to escape calamity no matter where he drives, and he did it again while avoiding the walls and other cars in the wake of Jones’ misfortune.

His Chevy also had damage on it from close encounters with the outside wall, and if there was a late race debris caution, it very well might have come from his Velveeta Shells & Cheese car. Let’s call his eighth-place finish “eventful.”

“Our Supra was fast, just not enough there at the end.” – Kyle Busch

“We were pretty awful. That was one of the worst races I’ve run yet.” – Christopher Bell (who, by the way, finished third)

“We’ve been a little bit frustrated with ourselves. You know, we wanted to run better than fourth or top-five, but today we accomplished that.” – Cole Custer

Best Xfinity Series race of 2019 so far? It says here that it was. Part of that is relative because we’ve had to suffer through some absolute snoozers (see also: Daytona, Phoenix), but even with Busch driving away a bit in the first two stages, there were good battles elsewhere in the top 10 throughout and a dynamite final act with a surprise twist ending.

To a certain extent, it’s an upset any time someone wins an Xfinity race that Busch runs, and everyone loves a good upset. Unless you were a member of Rowdy Nation preparing to celebrate No. 200, you probably smiled when Custer took the checkered flag on Saturday.

The Xfinity Series takes a week off, which is kind of a bummer because the track it skips is Martinsville. Texas is the next stop, with the My Bariatric Solutions 300 set for Saturday, March 30. Coverage begins at 1:00 p.m. ET on FS1, which won’t have a boxing pay-per-view to promote that particular night. Ryan Blaney won the race in 2018, but the driver with the most career victories in that event is … wait for it … Kyle Busch.

I can’t wait for Busch to win #200 so I won’t have to be drubbed over the head with the stats and how ‘amazing and wonderful’ it is. He’s REALLY good. I got it. Move on. Please! As is typical, media takes a good story and runs it into the ground until you want to scream.

That Is ALL they talked about all last weekend and all this weekend.

I am sick of hearing about it.

That’s because its all they have to talk about. They can’t talk about the laughable changes NA$CAR in their infinite wisdom have made to improve their product.