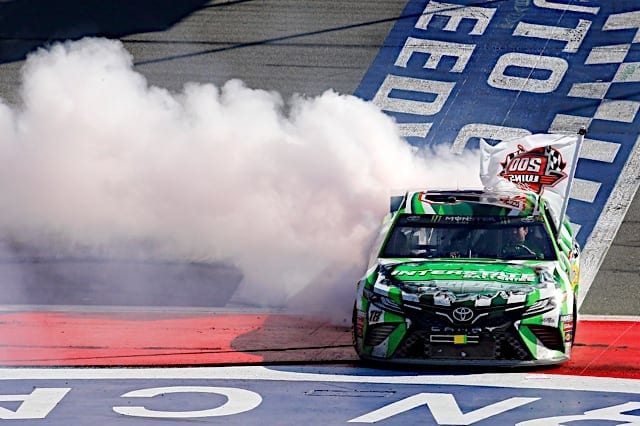 It finally happened. After weeks of publicity and hype, Kyle Busch scored his 200th career victory across NASCAR’s three national touring series in Sunday’s Auto Club 400. Busch is looking unbeatable, but will this trend last as NASCAR moves back east?

Once again, Martin Truex Jr started deep in the field at Auto Club but came away with an impressive top 10 after fighting a damaged race car throughout the day. If Truex gets to qualifying better, can he finally be a threat once again?

Although the season is young, Chevrolet’s struggles look to be continuing. However, Kurt Busch has strung together four straight top 10s. Can Busch carry the bow-tie and rally the rest of the Chevrolet troops as the season progresses?

Ryan Blaney quietly drove his Ford into the top five at the two-mile California track, which backed up a third-place result at ISM Raceway a week earlier. After a rocky trio of races to begin the season, will Blaney’s last two performances be indicative of the performances of his fellow Penske teammates?

Questions circulate as the series moves to the first true short track this season, Martinsville Speedway. Some drivers are looking to carry momentum from the west coast swing into the paperclip-shaped track, while others are hoping to use the short track edge to turn around their season. Our Frontstretch experts had the challenging task of determining the top 12 drivers in NASCAR — well, at least the 2nd to 12th best.

Our panel was unanimous in picking Busch as their number one driver in present-day NASCAR. With immense buildup over the last month, Busch has now reached the golden number: 200 wins. Although that number includes Xfinity and Gander Outdoors Truck series victories, many in the NASCAR sphere have been comparing (or lack thereof as the majority concludes) Busch’s accomplishment to Richard Petty’s “unreachable” mark. But, Michael Waltrip might have put it best. Yep, its from Mikey of all people.

The best way to compare Richard Petty and @KyleBusch accomplishments is to understand they’ve both achieved a level of greatness that will never be seen again in @NASCAR. Never. That’s a long time.

“He’s good, no doubt. Now that he’s hit 200 wins can we talk about something else?” -Dan Greene, Frontstretch

“Genius move by Busch. He hates the new package, and he keeps winning so fans will also hate it.” -Michael Massie, Frontstretch

For the second straight week, Logano sits in second in the power rankings behind Kyle Busch. However, citing the results of the first five events, Team Penske and Joe Gibbs Racing look to have the best grip on the new aero package. Can the Penske brigade, led by defending champion Logano, dethrone Busch though? A runner-up finish at Auto Club Speedway certainly helps, but they still have some work to do.

Great to have my buddy @jayleno with us today. ?? pic.twitter.com/wGi2p0QItI

“Logano returns to Martinsville for the first time since the bump and run on Martin Truex Jr. Hopefully, they qualify next to each other, ride in the driver intros truck together and race together the whole day.” -Massie

The second Penske driver, Keselowski, also had a superb showing at Auto Club. The No 2 driver piloted his Ford to a third-place finish, right behind Busch and Logano. But, Keselowski seemed focused on his other teammate, Ryan Blaney. Doesn’t Keselowski sound like a dad?

Very proud of @blaney this weekend. He’s come so far…

“With another fast car, I guess you could say this most recent run was Wurth it for Keselowski at Fontana.” -Rob Tiongson, The Podium Finish

With Kyle Busch winning in every car he drives, the Big Three from last year might be no more. Sure, Truex has had a change of scenery, but where has Harvick been? He’s only third in points, has no wins and a dismal four top 10s through five events. Geez, he already had three wins at this point in 2018. Last season, Happy was cruising to victories, but he’s now “fighting” for them. But come on, he might not be having the best start in recent years, but he is still a force to be reckoned with.

Definitely not what we want, and we have a lot of work to do.. But a hell of a day today fighting all day.. @KevinHarvick and the pit crew did a great job today, and the road guys fought all weekend on the car! @StewartHaasRcng

“Kevin Harvick doesn’t have a win yet? Oh the horror! This is an off year for Harvick.” -Jake Baskinger, Jake Baskinger on YouTube

You would expect a driver with an energy drink sponsorship to have fire, vivacity and aggression out on the race track. Instead, Kurt Busch has been lurking in the shadows. With all the emphasis placed upon his younger brother, the elder Busch has been clicking off top 10 after top 10, a-la former teammate Aric Almirola. Quietly, Busch has become the most consistent Chevrolet driver in the field. Is he on the precipice of getting Chevy its first win of 2019?

Look at this crew. This is how we roll @monsterenergy, glad you guys came out to enjoy @nascar @MotleyCrue @machinegunkelly pic.twitter.com/QWMLlg6ImW

“The Outlaw continues to fly the flag high for the Bowtie.” -Kobe Lambeth, Kobelambeth.com

Once again, Truex had a poor qualifying effort, which put him deep in the field. Yet, he, with the aid of crew chief Cole Pearn, was able to navigate his way up through the field with ease … that is until he caught Ricky Stenhouse Jr.

The driver out of New Jersey suffered significant right-rear damage after being collected in a stampede to the high side of the race course to avoid a spinning Stenhouse. A solid eighth-place finish did follow, however.

We had an awesome @BassProShops Camry today. Just got in a bad spot on that one restart and hurt our car pretty bad. We never gave up on it and finished eighth with a car that probably shouldn’t have finished eighth. On to Martinsville. #TeamToyota pic.twitter.com/InsHAX9qrB

“Truex seemed to be coming through the field when he was collected in a crash, so he came through a second time, now in a damaged car, to finish 8th.” -Ryan Holman, Ryan Holman on YouTube

What have you done if you are a driver and get booed at a track in your home state? You must have done something outrageous. Let’s ask the Chase Elliott fans. Two seasons later, there is still a cloud of dissent surrounding Hamlin when he strolls into Martinsville. We will see how the crowd reaction presents itself, but just remember, a large amount of Elliott supporters still use FedEx to ship their packages.

A lugnut penalty to Denny Hamlin's team was the only issue at @ACSupdates pic.twitter.com/UE8lnbwbvC

Two top fives in a row for the son of the Buckeye Bullet isn’t bad. As the final Penske car, Blaney capped off an incredible weekend for the team, which put all three of its Mustangs inside the top five. But, why stop when you are already succeeding. If Blaney’s petition succeeds, there might just be a fourth Penske car in the near distant future, for the Buckeye Bullet himself.

Would be cool if Mr. Penske could hook him up with one last quality ride so we could watch the two do you duke it out in Cup cars.

I do like this idea. One last ride @Team_Penske ? https://t.co/LDqgS5MmsJ

Another race, another top 10.

“Getting close to the bacon. He needs to have a good car at the end like he had at the beginning of the race.” -Baskinger

Although little notice was given, Larson smacked the wall pretty hard in the scramble to get around the spinning Stenhouse. Larson did manage to come out of his home state with a 12th-place finish with a damaged race car. However, the Californian has made little noise throughout the young season. While his teammate Kurt Busch is off to the best start in several years, Larson has been a tick off, possibly due to the questions surrounding the new aero package. When will the next “SLIDE JOB” moment come? We will have to wait and see.

Not the best race for us yesterday. Got quite a bit of damage at the end of the 1st stage and salvaged a 12th place finish at the end of the race. Had fun on the west coast swing but didn’t get the finishes we wanted. We’ll keep working hard!

“I keep waiting to see Larson try to rim ride at Martinsville and make it work. If anyone can, it’s him.” -Massie

Not a single Hendrick Motorsports car finished in the top 10 … again. Concern might just be creeping in for the Concord, NC based team. Last season, Elliott put a brief end to the highly documented struggles of HMS, by scoring three wins. However, a dismal west coast swing has seemed to emulate the irks of last season. Not long ago, many were asking “when will Chase ever when a race?” Based upon recent performances, we might need to ask, “when will Chase ever win again?” Despite the concerns, the son of Awesome Bill from Dawsonville continues to bring levity and energy to track each week. Oh, and Daniel Suarez has a new biggest fan.

My amigo @chaseelliott is rocking his #DanielsAmigos shirt today! ???? pic.twitter.com/CktYjcc3AF

“He’s not showing the same speed he had at the end of last season. But hey, he’s still the fastest Hendrick car.” -Eric Estepp, Out of the Groove

So, Michael Jordan had the flu game and Keselowski had the flu race. Dillon wanted to join the party too. Although relief driver Cole Custer was on standby, an ailing Dillon persevered through the entirety of the event. He didn’t win the contest, but he did win the pole and arguably had the best race of his season, including a bounce-back 10th-place finish from a cut tire. Maybe drivers should get ill more often.

Suit was a little tight ? Can’t thank everyone enough for letting me be on stand by https://t.co/yDFHLMxSP6

“After scoring his first top 10 of the year, Dillon needs to repeat the process of getting sick, having Cole Custer on the pit box and blowing a tire. It was obviously a successful combo.” -Massie