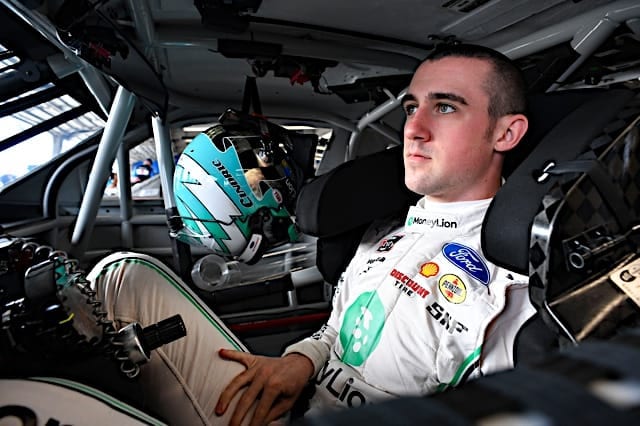 Austin Cindric was a jack of all trades in 2018, working with both Team Penske and Roush Fenway Racing. Now, he’s happy to have just one priority: that being to chase a NASCAR Xfinity Series championship with the No. 22 team at Penske.

Cindric, 20, recorded seven top-five and 13 top-10 finishes in his rookie campaign last season, all in Team Penske equipment. His best result for RFR was 13th at Watkins Glen International in early August.

But it wasn’t all glitz and glamour for the North Carolina native last year.

“I think I learned a lot of tough lessons that I think other drivers my age and where they’re at in their career haven’t had the opportunity to learn,” Cindric told Frontstretch of his rookie season. “I’m somewhat grateful to know I had a tough time for a lot of the time last year because I think it’s made me a lot more aware as a stock car driver.”

As his rookie season continued, Cindric showed repeated progress with Team Penske. During the playoffs, he had four top-five efforts in seven races, finishing the year with three consecutive.

Throughout his racing career — which covers Sports Cars, Rallycross, ARCA, the Gander Outdoors Truck Series and now Xfinity — Cindric has never been with the same team consecutive years. But that’s not necessarily a bad thing.

“My adaptability of working with people, I think that really benefited me for the challenges that I had last year,” Cindric stated. “In NASCAR, it’s so competitive and you have guys running week-in, week-out for 30 plus weekends, that you’re not looking for 95 percent, you’re looking for the last five percent.

“I could show up and get my basic priorities down and run in the top 10, but you want to win races. That takes time. That takes consistency and continuity, and those were some of the things I was lacking.”

From the race at Pocono Raceway (June 2) until the playoffs beginning at Richmond Raceway (Sept. 21), Cindirc never ran for the same team in consecutive weeks. One week, he was running in the No. 60 car for RFR that almost seemed doomed. The next week, he may run in Penske’s staple No. 22 machine or in the part-time No. 12 ride that didn’t have crew members showing up to the track on a weekly basis.

But that’s the past. In five races this season, Cindric has four top 10s and sits fifth in the championship standings, coming off a sixth-place finish at Auto Club Speedway after spinning midway through the race. Overall, he’s excited for the opportunity to run the full season in the famed No. 22 ride, which has won 48 races this decade.

“I feel really good about where I am as a driver,” Cindric said. “I still have a lot more to grow in the stock car stuff, but I think the opportunity to come back for a second year and learn what it takes to win races, that’s my biggest goal. Not to just run consistently in the top five, which I think we proved we could do by the tail end of the playoffs, it’s learning how to win races. I haven’t had that kind of opportunity in my career.”

Overall, this season is Team Penske’s first shot at capturing the driver’s championship since Sam Hornish Jr. finished runner up in the championship standings to Austin Dillon in 2013.

Cindric says now that the Xfinity program has something to fight for other than the owner’s title, his group is pumped. But he believes there is pressure to perform.

“They are very excited to have a full-time effort,” Cindric said of the No. 22 team. “Whether it’s the guys in the fab shop, assembly shop, marketing department — everyone is really excited that we have a car that’s running for the driver’s championship. That’s on me. I get to do that. Everyone is excited to be fighting for the big prize. That’s in my hands and I’m looking forward to doing it.”

Cindric was in contention to win a couple of races in 2018. He’s always among the favorites when the series heads to road courses due to his road course background in Sports Cars.

The No. 22 car sat on the pole, won a stage and led a race-high 59 laps at Mid-Ohio Sports Car Course. However, Justin Allgaier got by in the waning laps to get the victory. Two weeks later at Road America, Cindric had an engine issue early in the race, resulting in a 37th-place finish.

Putting a whole race together is at the top of Cindric’s bucket list this season, and he believes its one of the biggest areas he needs to work on as a race car driver.

“It’s just learning how to win races and executing week in and week out,” Cindric said. “If you look at my year in Trucks (2017, finished third in points) and last year, it’s the tail end of the season of figuring out, ‘I need to do this, this and this from the time we unload to the time the checkered flag falls at the end of stage three to execute a race weekend.’

“Now, it’s just about applying it at the beginning of the year, going all the way through because what’s really hurt me the last two years is not having any playoff points. To think, I honestly had a really good shot of making it [to Homestead-Miami Speedway] last year in the Xfinity Series with no playoff points every single round and starting from the bottom. It’s very doable and very possible, and you can’t do it without the right people.”

The end goal is winning.

The series has an off week before heading to Texas Motor Speedway (March 30), where Cindric placed third in the fall race in 2018, only behind Cole Custer and Tyler Reddick.