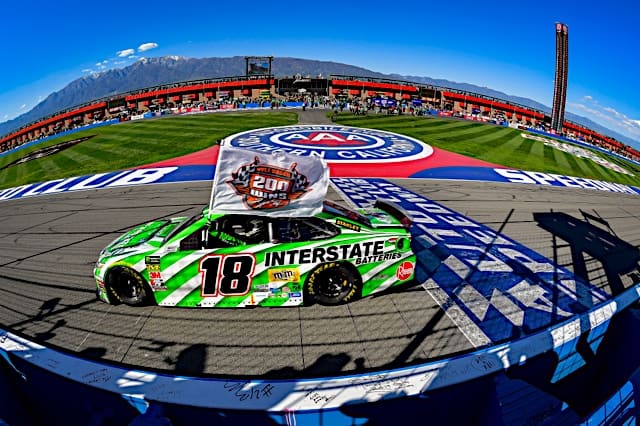 Richard Petty is “The King” for a reason. His 200 wins in Cup series competition is a feat that’ll never be accomplished again. Whether you think all his wins are “legitimate” or not, you have to respect what the man has done.

Kyle Busch‘s 200 wins (and counting) across all three national series is also a feat that’ll probably never be accomplished again (never say never). Whether or not you think he should have been “beating up on the little guys” in the Xfinity and Gander Outdoors Truck Series, you have to respect what the man has done.

You don’t have to take a side here. By all means, go ahead. It’s your right to defend Richard or Kyle until the end of time. But I never took a side. I never will. I’m trying something different.

Appreciating two historical greats in their own right for incredible accomplishments. What a concept, right? I mean, I wasn’t alive for any of Petty’s 200 victories. I’ve been alive for all of Busch’s 200. It’d be unfair for me to go with the “well, he’s one of the greatest I’ve ever seen, so he’s better” narrative.

The main argument, as we all have been subjected to for some time now, is the competition. Sure, Busch running against Xfinity and Truck Series drivers who are inferior to him may be considered a little unfair. Especially when you think about the equipment he’s in with Joe Gibbs Racing and Kyle Busch Motorsports. He has a clear, but not unfair advantage. He’s taking advantage of the rules put in place and doing it better than anybody else.

Isn’t that what Richard Petty did, too? After all, he had way more than 36 races in some seasons, had way less than 40 cars in a given field, had a clear equipment advantage with Petty Enterprises and beat up on the little guys just like Busch.

They’re comparable, but also kind of not. Unique in their own way, jaw dropping and polarizing.

Busch himself has said comparing them is tough to do, and Petty kind of deflected the question when asked as well. They both have respect for each other and their accomplishments. So why can’t we?

It’s not like Busch is going to win anywhere NEAR 200 Cup races. And with the way the sanctioning body keeps limiting Cup Series drivers to the lower series, it’s looking more and more unlikely he’ll reach 300. 250? Possible. But one thing is for sure: he’s surpassing the 200 mark. Heck, he might even do it this weekend at Martinsville Speedway.

People haven’t sat back and appreciated what Jimmie Johnson has done. Seven championships has been done before, yes. But five in a row? Nope. One of the more under-appreciated feats in NASCAR history, moreover, in sports as a whole.

Point is: you can debate it all you want. You can disagree with each other on whoever’s feat is more impressive. But for the love of Big Bill France, PLEASE at least sit back for a second and appreciate what these two drivers did and will continue to do.