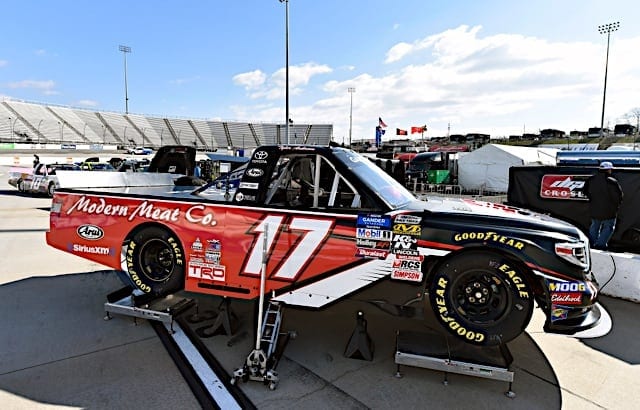 The lack of Monster Energy NASCAR Cup Series action on Friday (March 22) at Martinsville Speedway did not mean it was a quiet day at the Virginia short track, as it hosted three separate practice sessions for the NASCAR Gander Outdoors Truck Series.

Tyler Ankrum was the surprise of the first practice, being the fastest on track at 94.538 mph. The 18-year-old from San Bernardino, Calif. won the 2018 NASCAR K&N Pro Series East championship and is set to make his third career Truck Series start on Saturday. Ankrum’s previous two Truck starts last year ended in an 18th at the fall Martinsville race and sixth at Phoenix.

Todd Gilliland completed a lap at 95.065 mph, best in the second session. Gilliland, who is still searching for his first Truck Series win, has raced three previous times at Martinsville, finishing fifth, 14th, and 12th in the past three Truck races at “The Paperclip”.

There was also a practice session in the morning prior to both official practice sessions, open only to rookie drivers. As far as Cup drivers, Kyle Busch was tenth in the first and 17th in the second, Bubba Wallace was 19th/21st, and Austin Dillon ended up 23rd/27th.

Gus Dean began the day as the fastest driver in the 50 minute morning rookie practice session. Only eight drivers turned laps in this morning session. Practice was stopped for ten minutes for debris clean-up. Canadian Raphael Lessard was second fastest and Kraus was third. Kraus also had the best ten consecutive lap average.

Almost as soon as the green flag flew, it was replaced by the red due to a minor spin after slight contact between Harrison Burton and Dawson Cram. Cram spun his Chevrolet around, but there was minimal damage at most for both drivers. Brett Moffitt stayed on top of the leaderboard for the majority of the session, before Ankrum logged his hot lap in the closing minutes. Myatt Snider was third and Derek Kraus ended up fourth. Creed rounded out the top five. Meanwhile, the Kyle Busch Motorsports duo of Todd Gilliland and owner Kyle Busch had the best 10 consecutive lap average, with Gilliland being slightly ahead (93.464 mph versus 93.259 mph) of his boss.

In the closing minutes, most drivers began to run mock qualifying runs. Stewart Friesen ended up second and Sheldon Creed was third. Grant Enfinger’s fastest lap was good enough for fourth on the board, while Austin Hill was fifth. There was a caution five minutes into the session for debris, but it was lifted relatively quickly and practice resumed with no further incident.

There are 38 teams on-site in Martinsville, but only 32 will race. The field will be whittled down in Qualifying. That will be held at 10:30 a.m. Saturday morning. The session will air live on FOX Sports 1.