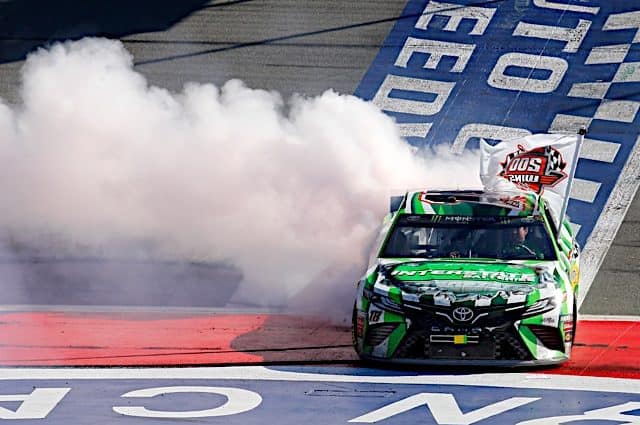 Four-for-Four: Takeaways from the first races with the 2019 package

As hard as it is to believe, the Monster Energy NASCAR Cup Series field is already four races into the 2019 rules package. From package discussion to surprising finishers, there have been quite a few things to note from the opening quartet of races.

Here are a few of the highlights thus far.

Remember that excitement most of us felt heading into the second race of this package at Las Vegas Motor Speedway – the first true test of the draft-heavy version, with low tire wear and 550 hp?

The 2019 rules package has proven to be a topic of debate and disagreement among the NASCAR populace in its first weeks of actions. But one thing’s certain – it hasn’t lived up to the massive expectations placed upon it heading into the year.

Perhaps its our fault for setting such lofty expectations for the package. NASCAR pitched a message of improved racing, and early testing showed promise for the packs to draft and stay within range of the leader. But while the racing has been closer than in previous years overall, the end results under the new package have ultimately felt a lot like they did last year.

There have been improvements. Races with the package have averaged 20 lead changes thus far, up 3.5 per race from the last year’s mark during the same stretch. We’ve also seen drivers march their way to the front in the closing stages of two of the races, with battles for the top spot inside of 30 to go.

Those marks have been positives, but there are also plenty of negatives to go around. Races have often unraveled into slow processions, particularly during long green-flag runs. The issue with that is just how many of those long runs there have been. The first two races at Atlanta Motor Speedway and Las Vegas went down without a single caution for an incident on-track, and ISM Raceway and Auto Club Speedway’s carnage largely consisted of flat tires and single-car issues. There has only been one multi-car wreck during the entire stint.

The 2019 package is seemingly at its best during short runs, when the field stays close together and cars can team up to make passes. But those moments have proven to be fleeting thus far. The cars seem to be too easy for the Cup Series stars to drive, leading to very few wrecks and opportunities to close the field up for restarts.

It’s still too early to make any definitive statements about the 2019 package, but the beginning stages leave many questions to be answered. Thankfully this weekend provides a trip to Martinsville Speedway, where rules package discussions typically fades away in favor of short track tempers and close-quarters racing.

Blame it on NASCAR for creating a package closer to what he dominates in the lower-tier series with. Blame it on Joe Gibbs Racing for giving him top-tier equipment wherever he races. Blame it on the field for allowing him to march past them at every track.

Look for whatever scapegoat you’d like. But you ultimately can’t deny this – Kyle Busch is dominating the early stretches of the season, and not just on the support tours.

Busch has dominated the airwaves for the past week after securing his 200th victory in NASCAR national series competition. But those looking only at that milestone are missing out on the more pressing topic surrounding him right now – Busch is damn near unstoppable on any tour he chooses to run.

The opening weekend was filled with stories of what could have been for Busch, following a disappointing runner-up run to Denny Hamlin in the Daytona 500. But the Nevadan has quickly washed those discussions away with a dominant performance through Atlanta and the West Coast Swing.

He began the stretch with a win in the Truck Series race at Atlanta. Busch had a quiet run in the following day’s Cup race — finishing sixth without leading a lap — but in the three weeks since he’s rarely been anywhere other than the front of the field. The trio of West Coast weekends saw Busch win five races, lead 740 laps and finish no worse than third in any series.

Domination in the Xfinity and Truck tours was expected. Busch is the all-time wins leader in both tours, after all. But his run of dominance in the Cup Series has been nothing short of remarkable.

Through five races of 2019, Busch is leading the points with an average finish of 2.6. That’s 5.7 positions better than his career-best 8.3 mark from last year. He’s already earned two victories and a quartet of stage wins, securing a guaranteed 14 playoff points heading into this weekend’s race at Martinsville.

Each of these stats trumps those of Busch’s closest competitors. Teammate Hamlin is the closest to Busch in average finish, but sits a full 4.2 positions lower with an average result of 6.8. Busch has led more than double the laps of any other driver, and no one else has more than six earned playoff points.

History shows that this is likely just an early peak in Busch’s season. He should eventually regress to the mean and fall in line closer to his top challengers.

But the rest of the field would still do well to pay attention to what Busch is doing. Because if they can’t catch up to him soon, the 2015 champion will be in position to cruise through the playoffs this fall regardless of how well his summer goes.

While his brother dominates at the front of the pack, Kurt Busch is enjoying a season that’s proving rewarding for different reasons.

The elder Busch brother made a leap to Chip Ganassi Racing over the offseason, joining phenom Kyle Larson in place of the retiring Jamie McMurray. He endured a miserable Daytona 500 run, finishing multiple laps down in 25th. But since then Busch has begun to take over for the organization.

In the past four races, Busch has brought home four top 10s with an average finish of 5.25. The Nevadan has been the top Chevrolet finisher in three of the four races, and finished only one spot behind teammate Larson in the other one. The runs have been impressive, particularly given the overall struggles the Bowtie brand have endured to open the year.

Busch has shown his worth immediately at CGR, lifting the No. 1 team to heights it rarely saw with McMurray in recent years. He hasn’t been the only one to impress in the early stages of the season, though.

Aric Almirola picked up where he left off last year at Stewart-Haas Racing, rising to sixth in the standings with a host of consistent runs. Throw out a 32nd-place disappointment in Daytona, and the Floridian has averaged a finish of 7.0 in his past four starts.

They haven’t had the pace of fellow Ford organizations Team Penske and SHR, but Ricky Stenhouse Jr. and Roush Fenway Racing have proven to be consistent contenders for top 10s in the early stretch of the season. Stenhouse has made the final round of qualifying four times in five races, and has parlayed the early track position into an average finish of 12.8 to sit 11th in the standings entering Martinsville.

Richard Childress Racing hasn’t had many good finishes to show for its efforts, but both Austin Dillon and Daniel Hemric have shown promise through the early stages of the season. Hemric had a top-five run going at Atlanta before a late flat tire doomed him, and Dillon had similar pace the following week in Las Vegas but was forced to pit late for fuel. Dillon finally made good on RCR’s pace in Fontana, winning his first pole since 2016 and overcoming flu-like symptoms and a flat tire for a top-10 run.

Other teams have surprised for the wrong reasons. Hendrick Motorsports continues to to struggle with consistent pace, all sitting outside of the top 10 in points. Daniel Suarez has struggled in his first few weeks with SHR, making more news for a qualifying brawl than his results on track. Clint Bowyer has had poor luck to start the year, scoring just one top-10 result and dropping to 15th in the championship standings.

It’s hard to consider this a true surprise because it mimics what we saw last year, but early on the battle for Cup Series supremacy has been left to two of the three manufacturers – Ford and Toyota.

Kyle Busch’s aforementioned dominance has led the way for the Cup field, establishing Toyota has a threat to get back to another championship. The sport’s newest manufacturer also has a victory in NASCAR’s biggest race to its credit, courtesy of Hamlin’s emotional drive to victory in the Daytona 500.

But while Toyota may be at the top of the pile, its numbers are thin compared to Ford. The Blue Ovals currently control six of the top 11 spots in the points standings, led by the strong performance of Penske and SHR. Penske’s Logano and Brad Keselowski have each given Ford early victories to celebrate, while SHR’s Kevin Harvick and Almirola have proven to be consistent contenders through the early stages of the season.

Sitting a distant third is Chevrolet. Kurt Busch’s consistency and Larson’s occasional pace have shown glimpses of promise for the Bowtie brand, but otherwise they’ve struggled through the opening five races of 2019.

Larson and Busch are the only two Chevrolets inside of the top 10 in points, sitting eighth and ninth. You have to drop 25 points behind them to find Chase Elliott in 11th, and another 14 points back to see seven-time Cup Series champion Jimmie Johnson in 14th. Alex Bowman is holding on to the final playoff spot in 16th, but he’s yet to see a top-10 finish this season.

This lack of pace is nothing new for Chevrolet. The company struggled last season, with a Daytona 500 win for Dillon and a strong late stretch from Elliott serving as the only real highlights to an otherwise subpar year.

There is still time for the Bowties to make changes and improve this season, but so far 2019 looks like it’s going to play out similarly to 2018 – with Fords and Toyotas atop the charts.

A graduate of Ball State, Aaron rejoins Frontstretch for his second season in 2016 following a successful year that included covering seven races and starting the popular "Two-Headed Monster" column in 2015. Now in his third year of covering motorsports, Aaron serves as an Assistant Editor for Frontstretch while also contributing to other popular sites including Speed51 and The Apex. He encourages you to come say hi when you see him at the track.
@AaronBearden93
Previous IndyCar Invades COTA
Next Daily Fantasy NASCAR FanDuel Forecast: 2019 STP 500