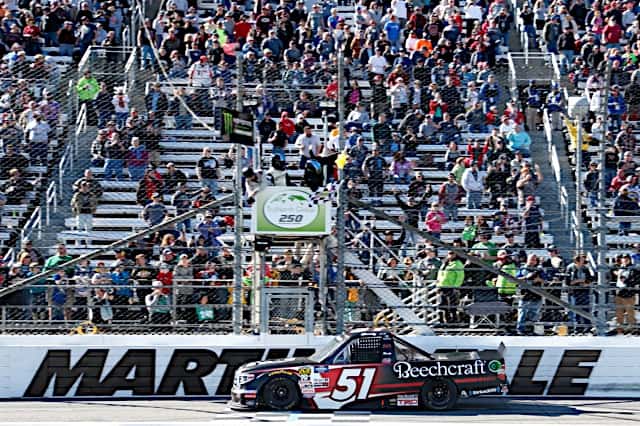 In a Nutshell: Kyle Busch did what Kyle Busch does in the Gander Outdoors Truck Series and every other NASCAR national touring series — win. Busch led 174 of 250 laps to pick up his 54th Truck win and 201st NASCAR national win. The win was also Busch’s third Truck win of the season in as many races.

Rhodes’ ThorSport Racing teammates Myatt Snider, Grant Enfinger, Matt Crafton and Johnny Sauter took positions six through nine, putting all five of the team’s trucks in the top 10. The team expanded to a fifth truck for this season, adding a part-time entry for Snider after putting Sauter in its No. 13.

Bubba Wallace finished 10th for AM Racing in his first Truck Series race since 2017.

Who Should Have Won: Busch. He was clearly the fastest truck all day. The only obstacle came when Chastain got up front and held him off for 53 laps before the 2015 Monster Energy NASCAR Cup Series champion got back out front. Chastain led long enough to win Stage 2, preventing Busch from sweeping the event.

Chastain continues to overachieve for smaller teams. The watermelon farmer was Busch’s greatest adversary in the race, leading 53 laps and winning Stage 2. Entering the race, Niece Motorsports, which has existed since 2016, had only led three laps overall, so Chastain by far gave the organization its most competitive outing.

The Florida native faded to fourth at the end, but the rest of the field knew his No. 45 was there. Also, Chastain continued his streak of finishing in the top 10 in every NGOTS race this season.

Johnny Sauter Gets Top 10 After a Plethora of Problems

Sauter finished ninth but he may have had a truck capable of beating Busch. Sauter started the race in eighth and worked his way up to second before a spark plug issue slowed his truck.

The No. 13 crew worked diligently under the first caution to get the issue fixed, and Sauter was quickly working his way through the field again. Sauter was back inside the top 10 when he had a tire blow. Sauter limped to pit road and seemed saved when the caution flew for Daniel Sasnett‘s spin. But Sauter had a commitment line violation when he pitted so NASCAR voided his free pass to keep him on the lead lap. The result was an unhappy Sauter.

"NASCAR told us we were the free pass and then took it back," Sauter is told. Commitment cone violation.

"Mother fuckers. Stupid ass motherfuckers. Show some common goddamn sense. There were cars all over the goddamn place. What was I supposed to fucking do? FUUUUCK."

Sauter eventually got his lap back and raced his way up to ninth, but ran out of laps. He could not be reached for comment after the race.

Al Niece of @NieceMotorsport just announced that @Angela__Ruch is driving his No. 44 truck for 12 races pic.twitter.com/IH1PGIl3Z6

Number of Rookies in the Race: 5

Up Next: The Gander Outdoors Truck Series races next week at Texas Motor Speedway on Friday, March 29. Race coverage begins at 9 p.m. ET on Fox Sports 1; the race can also be heard on your local MRN affiliate or SiriusXM NASCAR Channel 90.

News flash!!! I will not watch another truck race if the baby mauler is entered. The lower series’ have become a bad joke.