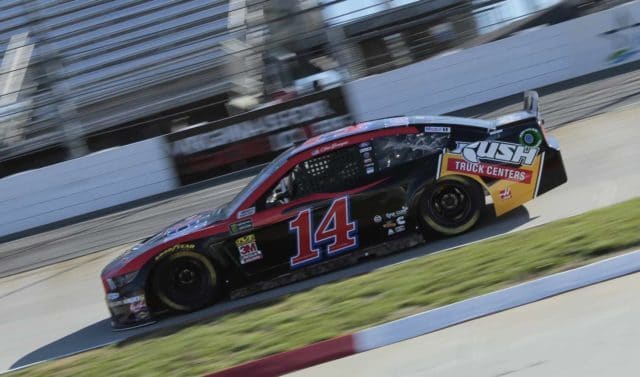 Sunday’s (March 24) STP 500 will be remembered as what could have been for Clint Bowyer.

The defending winner of the event started 10th and quickly asserted himself in the conversation of quickest cars, finishing seventh in the first stage an eighth in the second. But pit road speeding penalties derailed his potential quest for a Martinsville Speedway repeat.

What sealed the Emporia, Kansas native’s fate was the second of the infractions coming during yellow flag pit stops after a lap 373 caution. After a few expletives to vent his frustration on the radio, he was able to work his way back inside the top 10, eventually rebounding for a seventh-place finish.

Reflecting on his second top 10 of the season and the fourth top 10 in the last five races at the paperclip, he had nobody to blame but himself.

“It’s obviously on us,” he said. “It is what it is. We just got to quit beating ourselves.”

Although his No. 14 Mobil 1 Ford was fast, it wasn’t as fast as winner Brad Keselowski, who led 446 laps en route to his second career victory at Martinsville and second of the season.

“I don’t think anybody obviously had anything for the No. 2 (Keselowski),” he said. “The No. 9 (Chase Elliott) made adjustments early and was really fast. But I mean I think we were a top three car for sure. We just kept beating ourselves.”

Bowyer and the No. 14 team will look to make improvements and get back on track next weekend at Texas Motor Speedway. The O’Reilly Auto Parts 500 is scheduled to go green on Sunday, March 31 at 3:30 p.m. ET.