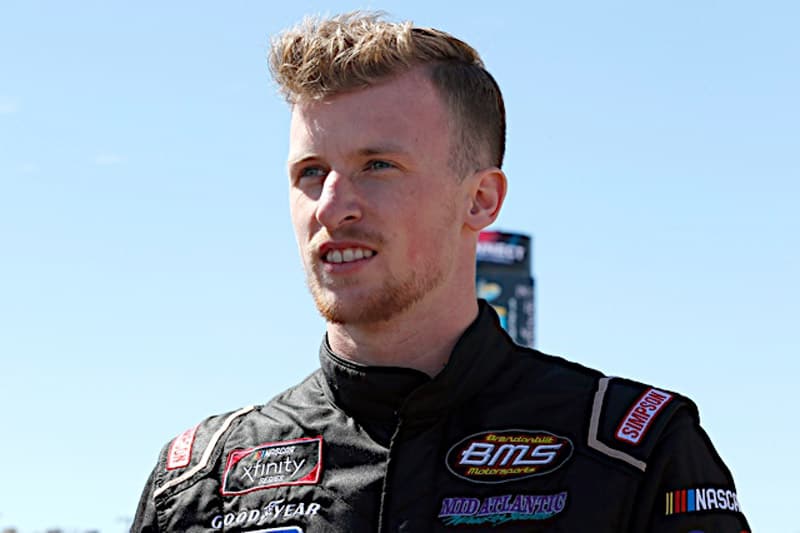 It’s rare for a NASCAR driver to attend and graduate college, but that’s exactly what Brandon Brown did in December. Now, he’s putting his marketing degree to use for his family-run NASCAR Xfinity Series operation, Brandonbilt Motorsports.

Joining the likes of current NASCAR drivers Ryan Newman and William Byron (currently enrolled at Liberty University) who went to college, Brown graduated from Coastal Carolina University, and did so while competing in NASCAR. In school, Brown competed in 22 Gander Outdoors Truck Series races and 20 Xfinity Series races, placing a career-best fourth in the 2016 Truck season opener at Daytona International Speedway.

Brown is committed to competing in NASCAR, as he’s taken on an executive role, that of marketing director, with the team, focusing on securing funding.

“The degree has translated very well for me,” Brown told Frontstretch of bringing his marketing knowledge to Brandonbilt Motorsports. “I’m very fortunate that once I get out of school I get to go do what I love, but then also do some marketing for the team. I think it prepared me more for the structure of a work day than anything and how you’re constantly trying to apply something new because if you stay stagnant with what you’re doing, nothing is going to change.

“Some of the material we learned is something I can apply — trying to pick up team communication throughout the entire organization as well as throughout the little marketing department that we have. At the same time, in the real world, everything is changing. It’s one of those things where you have to base it off you and who you’re talking to at that moment.”

Since NASCAR began, and especially in the modern era, funding has been the name of the game. However, much a team is willing to spend will determine how fast said team goes. Selling the car as a place where businesses can go to be seen and get value is a challenge, particularly for smaller teams.

Brandonbilt Motorsports is running its first full season in any series this season. Through the first five races of 2019, the No. 86 has three top-15 finishes with no primary sponsorship. Regardless, Brown believes there’s value of joining the Virginia-based team because of its infancy in the Xfinity Series.

“We can sell people as we are the new guy,” Brown stated. “We are the new kid on the block. We’re not stuck in the ways of the past that some teams might be. If you’re with us, you get branding on the car and that’s that.

Brown admitted that he looks up to Tad Geschickter, co-owner of JTG Daugherty Racing in the Monster Energy NASCAR Cup Series. He believes Geshickter has nailed down the sponsorship model of building a race team with Kroger.

In the past, Coastal Carolina had helped fund part of Brown’s Truck and Xfinity programs. But with a recent change in administration, there is no telling how much or how long the school will continue to support the team. Even if the two sides don’t realign, the 25-year-old is taking his marketing skills learned at the school to the corporate world.

“I think it gives us a pretty good advantage,” Brown mentioned, regarding having a marketing background compared to other drivers. “It really goes on who are you contacting and the size of the companies you’re reaching out to — whether it’s a corporation headquartered in New York or just a mom-and-pop shop that wants to be a part of the sport. I think it brings a small advantage to us, just knowing how to professionally communicate with somebody in that position and how to approach them.”

In the past, Brandonbilt Motorsports has done just that by working with small companies such as The Sign Shop, W.G. Speeks, and SunFrog, while also having the Jeff Gordon’s Children’s Foundation on its truck at Charlotte Motor Speedway in 2016.

Getting that real-world experience has done wonders for Brown, thus why he advises up-and-coming drivers to attend college.

“I think it’s an important step, not only for your racing career but just as a person,” Brown said. “When you get to school, you get to really learn how to do some time management and schedule yourself and how to spread yourself to do more than just one thing at a time. There’s volumes that speak to it, and it has helped me becoming full time, being able to handle the marketing side of things and constantly making sure I’m reaching out [to companies].”

Through five races this season, Brown has a best finish of 13th at Atlanta Motor Speedway, posting back-to-back top 15s at ISM Raceway and Auto Club Speedway. Currently, he sits 14th in the championship standings, 36 points behind Justin Haley, who’s on the playoff bubble (21 races remain in the regular season).

Unfortunately, there’s no telling if Brown will run the full season in the No. 86 because of funding.

“I know the team is definitely doing the full-time deal,” Brown said. “Right now, I’m in the seat until told otherwise. I’m hoping to do everything I can to show what the team has and continue fighting to secure finding for me personally to fill in the seat. That would be the end goal.

“I know funding and securing sponsors is more than huge for us. As much as you want to get mad and just stay in the seat yourself because it’s your family’s team, I’m also very focused on building the team up to where we’re one of the championship contenders, hopefully, one day. It doesn’t excite me that I might have to get out of the seat. But it’s one of those things where if it’s better for the team, I understand.”

The series heads to the Lone Star State this weekend, where Brown placed 18th in the last event at Texas Motor Speedway.