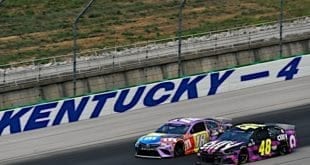 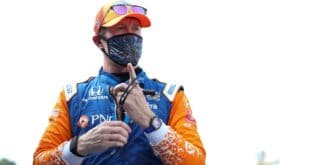 Did You Notice?: Talladega’s Modern-Day Myth That Anyone Can Win

1. How much of a success was the NASCAR schedule shake-up?

This past week, NASCAR revealed the 2020 Monster Energy NASCAR Cup Series schedule. It’s the most dramatic shift to the Cup Series slate in almost 50 years.

The 2020 schedule brings a number of changes, both experimental and seemingly long-lasting. The Pocono Raceway doubleheader, a first for Cup since the schedule was cut down in 1972, is a very risky experiment, to say the least. Having four national touring series races and possibly an ARCA race on Friday at a track with no lights and a location where rain is prevalent is going to be a massive undertaking.

Meanwhile, Martinsville Speedway’s spring race has been moved to a great date on the calendar: Mother’s Day weekend. It solves the problem of the weather being too unpredictable and also adds a night race at the paperclip. That’s something a lot of fans have wanted since the track installed lights a couple of years ago.

Then, there’s the not-so-small matter of moving the season finale. NASCAR Executive Vice President and Chief Racing Development Officer Steve O’Donnell made it clear the sport expects it to stay at ISM Raceway in Phoenix for at least a couple of years (it will move from Homestead-Miami Speedway in 2020). And who can blame them? Track owner International Speedway Corporation just spent millions upon millions of dollars in renovations at the-one mile oval. Besides, considering where a lot of these racetracks are located, Phoenix is not a bad city to hold a championship event in NASCAR.

2. What were some of the problems with the schedule shake-up?

That being said, the move of HMS away from the finale is something I’m not a big fan of. Homestead is probably the best mile-and-a-half racetrack on the schedule when it comes to race quality. There has also never been a problem as far as championship drivers struggling or one driver dominating. In five years, Homestead has seen five winners, five different champions, and just one year where the driver in second was not in the Championship 4. For example, most of the garage considers Kyle Larson the favorite, if not the best, at Homestead. But he has not won there in any of these past five years.

The moving of the second Daytona race from its traditional July 4th weekend to the last race of the regular season in August was a huge, unprecedented move. I do feel a superspeedway race works as a regular season finale. That’s due to the wildcard nature of it where almost anybody can end the day in Victory Lane. But it would have been better had the second race at Talladega moved in that slot and not Daytona so that no playoff driver has to worry about a ridiculous controversy that usually befalls that style of racing.

Another problem is Daytona’s race now falls right in the middle of hurricane season, as most Floridians will tell you. So it might be a bit hard to get the race in if a storm on the level of Irma hits the state just a couple of weeks before Irma did in 2017.

But the most baffling move is putting Indianapolis on July 4th weekend. It’s very easy for that racetrack to got hot, especially due to all of the buildings near the facility. In fact, one of the reasons Indianapolis was moved out of July in the first place was because of the heat. Now, NASCAR has decided to move back there? I know my ideal schedule had Indianapolis on that weekend. But that would have come with a caveat of the track installing lights and holding the race at night.

Overall, though I think the sport did a nice job; these schedule changes have been a long time coming. I’ve never understood why NASCAR didn’t figure out a way to include the Southern 500 or the Bristol Motor Speedway night race into the playoffs, and now both are in the first round.

These won’t be the last changes to the schedule; far from it. Once the track contracts expire at the end of next year, we should see some new ones pop up come 2021. You’ll maybe see some tracks leaving and perhaps an old favorite or two show back up. There’s a certain road course up in Wisconsin, for example, that could hold its first Cup race since 1956…

3. Will we be sticking with the Biff after June?

A familiar NASCAR face appeared at Texas Motor Speedway on Thursday (March 28). He jumped in and ran some practice laps in the No. 51 Toyota that Kyle Busch will race on Friday in the Gander Outdoors Truck Series.

Greg Biffle showed up to the Lone Star State for his first laps in a truck since 2004 and first in NASCAR competition since 2016. Biffle made them in preparation of a start in the June Truck race at the track. Why? It’s a simple reason: everybody else who could have ran the race will be in Michigan for Cup, NXS or ARCA action. With such a depleted pool of drivers to choose from, KBM decided to target Biffle to wheel their “all-star” entry.

Why is Greg Biffle racing the Kyle Busch Motorsports No. 51 truck at Texas in June? He explains: #nascar ⁦@NASCARONFOX⁩ pic.twitter.com/NSezn4vxua

It’ll be interesting to see if this one-off leads to more work for Biffle. The great thing about the Truck Series is that there’s significantly less pressure or commitments than what comes with Cup. Biffle is a valuable commodity in this division, both due to his years of experience and the past champion’s provisional that may come in handy in an emergency.

It’s possible that the June race will come and go and the 49-year-old Biffle doesn’t get the itch to stay active, like Matt Kenseth last year. But it’s also possible a strong result in a great car might give him motivation for a larger comeback.

4. How big of a mess has NASCAR made with qualifying?

Lost in the shuffle of all of this news about the schedule was the terrible job NASCAR did announcing its new qualifying rules this week.

NASCAR’s new rules, which can be read in full here, aren’t really going to do much to fix the issues. The problem with Auto Club Speedway was not that everybody waited at the end of pit road. The problem is that whoever is the last to go out under this rules package will be the pole sitter.

In trying to make changes, NASCAR played a little PR. They didn’t address the central problem; they simply adjusted how the public sees it manifest. And disallowing qualifying times is NASCAR trying to throw the problem to the teams, taking the blame off themselves.

“One of the things we wanted to hold true to is not to go back to single-car qualifying,” NASCAR Senior Vice President of Competition Scott Miller said in announcing the move. “Single-car qualifying is two things – it’s boring and it’s expensive. It also doesn’t create a good show.

“Anytime we go on the track, it should be a show. Certainly, we are in, first and foremost, the racing business. But we’re also in show business. We definitely have to provide our fans with something that’s intriguing to watch and gets them excited about coming back and watching the race.”

Never mind the obvious holes one can poke in this statement. (How is single-car qualifying more expensive?).

Second, when was single-car qualifying any more boring than group qualifying? The last iteration of single car, where the cars went out based on practice speeds, was a lot of fun to watch. Every car coming out was faster than the one before it. So there was a lot of movement going on across the board. What’s more is that there is something to watching a driver put everything he has into one hot lap. That’s different than the current system, one that has drivers trying to save their tires for two rounds, then use whatever they have left at the end.

Third, single-car qualifying is only as slow as you want it to be. Just send drivers out when the car before them is on the backstretch of their hot lap. If that’s done, a track as big as Michigan International Speedway or Auto Club can be done in well under an hour. Single-car qualifying became slow when NASCAR waited until after a hot lap was over before sending the next driver out.

Fourth, why does qualifying need to be a show? It’s qualifying. Going to group qualifying hasn’t dramatically increased viewership of qualifying or fans in the stands. It’s about who has the fastest car, not about waiting to catch the right draft to get the pole.

Finally, at the end of the day, NASCAR didn’t need to comment on the change at all, did they? They’ve burned the bridge of credibility by attaching that statement by Miller to their press release. So in a month, if we’re still having these qualifying problems, either NASCAR will have to stick to group qualifying or look like absolute idiots by going to single car. It’s not going to be the first time the sport has ended up with egg on its face, but it’s not often they make it so obvious.

So, on Friday at Texas, maybe I’ll be wrong. Maybe the teams will employ the Kurt Busch strategy of going out early in the round and banking on no drivers completing a lap in the session. Or, we’ll have something similar to what happened at Fontana, just with everybody waiting in their pit before pulling out too late. Whoever was 13th in the second round will end up the pole sitter once again.

My money’s on the latter.

Michael has watched NASCAR for 15 years and began covering the sport five years ago. He is a graduate of Salisbury University and a proud member of the National Motorsports Press Association (NMPA).
Previous Fire On Fridays: Kudos to NASCAR 2019 For Embracing Change… 2020 NASCAR Schedule Included
Next NASCAR 101: The Fluctuation of the NASCAR Calendar, by the Numbers