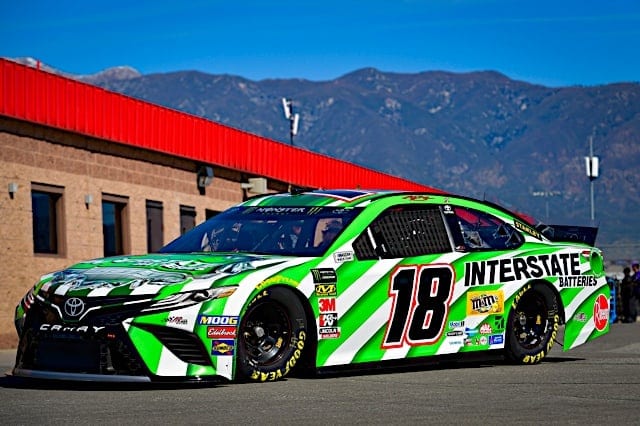 Joe Gibbs Racing has renewed a partnership with the team’s long time sponsor, Interstate Batteries. Although the actual length of the extension was undisclosed, the multi-year agreement will run through at least 2022, which will mark the 30th year of partnership between the two parties.

As a part of the agreement, 2015 Monster Energy NASCAR Cup Series champion Kyle Busch and his No. 18 Toyota will carry the colors of Interstate Batteries in six events throughout the 2020 season.

Thx to Norm, Scott and the entire group at @interstatebatts for your continued support of myself and @JoeGibbsRacing. Look forward to more wins and championships together. ? pic.twitter.com/qlz0kHQ8fK

“I tell people all the time that one of the great things about professional sports is the relationships you have a chance to develop over the years and I don’t know if there is a better example than what we have with Norm Miller and everyone there at Interstate Batteries,” Joe Gibbs, owner of Joe Gibbs Racing said.

Founded in 1992, JGR welcomed Interstate Batteries as their primary sponsor for Dale Jarrett during its inaugural season. JGR has carried the sponsorship backing from the company in every season since, including Bobby Labonte’s 2000 championship run and Jarrett’s 1993 Daytona 500 triumph.

“We literally had nothing when we met with Norm and asked him to help us start this race team and now our new agreement will extend the partnership to more than 30 years, Gibbs said. “And what’s amazing is how it has continued through generations.”

Throughout the nearly three decades of partnership, the battery company has supported a multitude of drivers in their careers. Along with Labonte, Busch, and Jarrett, Erik Jones, David Ragan, JJ Yeley, Daniel Suarez, Brandon Jones, Regan Smith, and others have wheeled a JGR Interstate Batteries vehicle, whether at the Cup of Xfinity Series level.

“Rarely does a marketing opportunity come along that can change the trajectory of a company,” Scott Miller, the CEO of Interstate Batteries stated. “Almost 30 year later, our brand has become a household name, our battery sales continue to increase and Joe Gibbs Racing absolutely had a hand in that. It is helping us ignite our future and become first choice in sustainable battery solutions.”

In its last outing, Busch took the No. 18 Interstate Batteries No. 18 to Victory Lane for Busch’s 200th NASCAR national touring series victory. It will return to the track this weekend at Texas Motor Speedway, the backyard of the company.